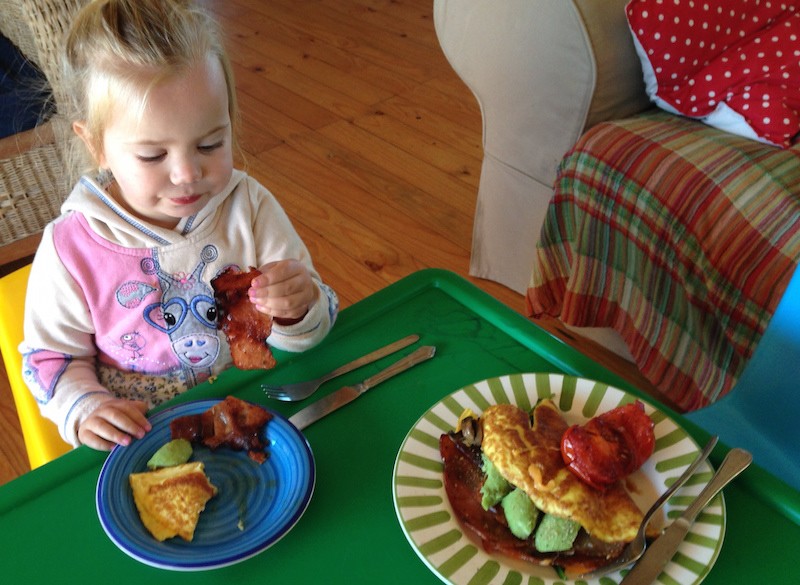 Is low-carb, high-fat (LCHF, aka ‘Banting’) safe for children? The debate is rising faster than you can say ‘Banting bread’, following a charge of ‘unprofessional conduct’ against UCT emeritus professor Tim Noakes for tweeting advice to a mother to wean her baby on meat and veg.  Registered dietitian Tamzyn Murphy Campbell says one problem is that dietitians are ‘terrified’ of the words low-carb. ‘They think (wrongly) that LCHF means drastic carbohydrate restriction only’, (to ketogenic levels, defined as lower than 50-60g daily for adults), she says. LCHF  incorporates varying levels of carbohydrate restriction, based on needs.

After extensive research, Murphy Campbell has raised daughter Hannah (nearly 3) on LCHF from very young. At a year, the only grains Hannah ate at home was about two teaspoons of oats in the morning, mixed with macadamia nut butter, full cream milk and a mashed piece of cooked apple. The  rest of her diet was classic LCHF – consisting of a variety of vegetables, meat, poultry, fish, eggs, avo, olive and coconut oils, butter, nut butters, dairy and some fruit. She introduced full cream dairy to Hannah’s diet at the age of one. She has now eliminated grains and added sugar completely at home. Murphy Campbell does not recommend limiting babies’ starchy vegetables (such as sweet potato or butternut), nor excluding fruit, as might be done for  adults with insulin resistance or weight management benefits. Here, she explains why she believes Banting is best for children. For all the references, scroll downfor a link to the full version of this blog. – Marika Sboros

Eating too much sugar is associated with dental caries and increased obesity risk, both of which are prevalent health concerns amongst South African children.

This represents 10-20% of daily calorie consumption [3]. South African adults on the other hand, are thought to be eating approximately 38-51g (9-13 teaspoons) of sugar each day, contributing 10-15% of their calories.

The World Health Organisation’s new guidelines recommend a maximum of 5% of daily calories from sugar – that’s no more than 7 teaspoons daily from all sources. Reducing or even eliminating our children’s added sugar consumption can only be good for their health.

Most medical practitioners and scientists will agree that drastically reducing or even cutting out children’s sources of added sugar can only be good for them. But the question remains, can children safely following a low carbohydrate, high fat (LCHF) diet (popularly known as Banting in South Africa), that’s devoid of starches and wholegrains as well as sugar?

Although, very little research has been done on LCHF eating in children, a few studies have shown that overweight  kids and teens (6-18 years of age) who followed a LCHF, containing less than 60g of carbs each day, successfully lost weight, without negatively affecting the levels of fat and cholesterol in their blood.

The authors suggest that reducing dietary carbohydrate may be a possible treatment for insulin resistance in children and adolescents.

It’s important to bear in mind that most children who follow a LCHF don’t need to drastically restrict carbohydrates to the ketogenic levels (<60g per day) investigated in the studies discussed above (A LCHF diet typically provides 20-120g of carbohydrate daily or 5-30% of total energy intake). So, while added sugar, starches and grains will be eliminated from their diets, other wholefood sources of carbohydrates won’t be excluded (e.g. dairy, starchy vegetables, nuts, seeds, fruit and even properly prepared legumes).  I recommend that children only restrict their carbohydrates to below 60g under the supervision of a dietitian or knowledgeable medical doctor.

Provided that a child consumes the recommended 3 portions of dairy daily and eats enough vegetables, supplementation shouldn’t be any more necessary on this diet than with any other. While I don’t suggest being too restrictive about children’s starchy vegetable, fruit and nut consumption, excluding starches (in the form of grains) and added sugar from children’s diets shouldn’t pose any health risk and will likely come with a host of benefits. Especially considering that these restrictions are done in the context of a diet that emphasises avoiding processed food, while eating REAL, nutrient dense foods.

Exclude: Added sugar (in all its forms), grains, processed food.

*Tamzyn Murphy Campbell is a nutrition editor and writer for Health Intelligence magazine. She is co-author of Sugar Free, by Karen Thomson. She writes and manages website content for companies, and trains reps and customers.