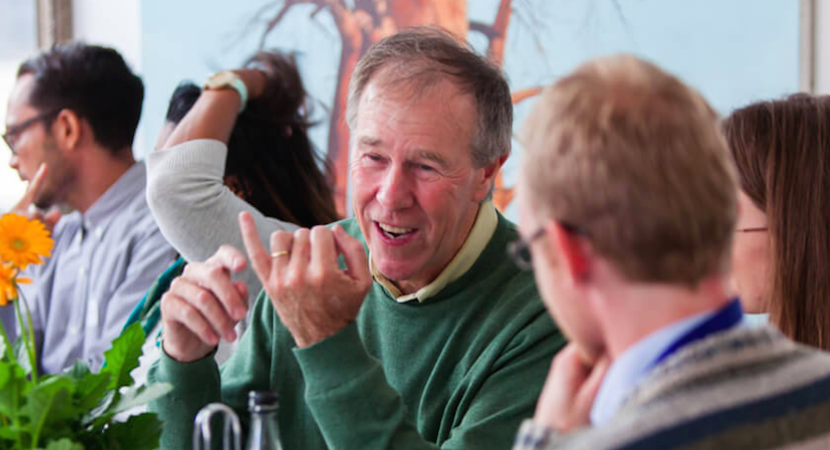 South Africa’s official dietary guidelines are looking more like ‘misguidelines’. University of Cape Town emeritus professor Tim Noakes spent much of the sixth day of the Health Professions Council of SA (HPCSA) hearing against him probing the underbelly of these guidelines and finding found them wanting – on infant weaning in particular and woefully inadequate in general for the job they are meant to do: guide the health of a nation. Noakes is facing a charge of unprofessional conduct for a tweet to a breastfeeding mother saying good first foods for infant weaning are low-carb, high-fat (LCHF) – in this case meat and veg. The HPCSA deemed this advice unconventional and not evidence-based, hence the charge against him. Noakes is busily building a compelling case to show his advice is only unconventional if you don’t look at the evidence. It is not even in conflict with recommendations in the official dietary guidelines on complementary foods for paediatric weaning, and testimony of the HPCSA’s own expert witnesses, including NorthWest University nutrition professors HH ‘Este’ Vorster and Salome Kruger.

However, it seems to me it’s  not so much what Noakes said as what he did not say that has led to this strange case: South Africa’s dietary guidelines promote meat and veg but also promote cereals and grains. Even in their unrefined versions, Noakes is no fan of these foods. He says they are a major contributor to the obesity epidemic and rising levels of type 2 diabetes in children as young as three years old, and have no place in infant feeding – or adult feeding for that matter. He says these foods are bad for babies’ brains. The biggest and terminal problem with current dietary guidelines, not just in South Africa but globally, he says, is that they are led by industry – food and drug companies – not science. The dietetic experts who developed these guidelines and the dietitians who promote them so enthusiastically are looking increasingly  misguided – at best. In the last of a six-part series on Noakes’ thinking, Cape Town science and business writer Rob Worthington-Smith looks at what needs to change, and what science really says about good first foods for babies. – Marika Sboros

In this series of articles we have analysed the two competing theories of food metabolism. Conventional dieticians maintain that gluttony and sloth are societal ills that require education: eat less and exercise more.

They reject the idea that carbs could be the problem; indeed, they warn that saturated fats have dangerous long-term consequences, particularly for the arteries.

On the other hand, Professor Noakes and other researchers argue that common sense has long been staring us in the face. Their advice is to go back to the original food we evolved to eat. The evidence they present starts with the 2.3 million years it took to evolve Homo sapiens as a hunter and carnivore. Such populations still living today are amongst the most healthy on the planet.

Further, when the cultivation of grains allowed the advance of civilisation, early settler populations (for example, in the evidence found in Egyptian mummies) immediately showed many of the same symptoms of metabolic disorder (decaying teeth and atherosclerosis) as we see today. Adding sugar and processed foods has simply accelerated the march towards obesity, diabetes and other diseases. Unfortunately, the evidence for this common sense has remained largely covered up through the efforts of the food and pharmaceutical industry.

The metabolic model explaining this deterioration centres on the role of insulin in regulating blood sugar and storing fat, a very specific metabolism with a very specific role in our ancient ancestors’ lives: In a natural environment of seasons, of feast and famine, it made sense to be able to pack away fruit and vegetables during their short season.

The role of insulin is to help the body do this safely (ie. avoid overloaded blood sugar), stay hungry in order to keep eating what was available, and make sure the produced fat went into storage around the midriff.

In this model, normal food metabolism revolved around animal fat as the primary source of energy for the body. It so happens that these fats, along with the accompanying protein, are also the source of all the essential nutrients required by the body (whereas carbohydrate is not an essential nutrient).

Most importantly, when the body has had enough fat to eat (ie. taken in enough energy), appropriate signals sent to the brain tell us to stop eating. Under this dietary regime, the twin evils of fluctuating blood glucose concentrations and obesity are metabolically impossible.

The nub of the issue in the 21st century is that we are awash in carbohydrate foods. Its metabolism hijacks our brains, encouraging us to eat more, well beyond our daily requirement for energy. That was well and good 12,000 years ago when natural carbs were available only periodically.

However, over the last 60 years, food companies have honed the tastiness of their products such that we cannot help but get fat from constant snacking on delicious foods. The toxic nature of these foods (not just cereal products, but also trans fats, processed carbs and sugars), makes us sick, driving us to seek pharmaceutical remedies.

This vicious downward spiral has had a terrible consequence for our health, while creating multi-billion dollar opportunities for the food processing and pharmaceutical industries.

The key question that will be argued at the HPCSA hearing is what are the first foods that our weaning infants should be eating, and what foods should be avoided? If the food industry has held the general population in its thrall for so long, is it possible that the same industry could bend the science in order to introduce more profitable alternatives to natural foods for infants?

Read also: Tim Noakes trial: the best to hope for – madness or miracle?

The story of breast-feeding may offer a clue.

Most of us have forgotten that not so long ago it was considered unhealthy to breastfeed and that babies would grow healthier and be less at risk if fed with substitute formula milk, expensively procured from the ever-helpful food and pharmaceutical industry. Such commercial messaging was eagerly accepted by mothers feeling guilty following their recent entry into the workplace after World War II.

At the height of this madness, formula milk became an aspirational product strongly linked to class, and primary health care clinics have had a significant challenge on their hands encouraging mothers from poor backgrounds that the best milk for their babies is the milk being made by their very own bodies. As we have seen before, a story, well-advertised by commercial interests, can not only dupe the general population, but even the healthcare industry itself.

Noakes, having gathered the evidence of a slew of studies into infant nutrition, believes that the same misinformation around the value of carbohydrate, and the evil in fats, is what drives the current dietetic profession to recommend that cereals and grains form the main part of a weaning infant’s nutrition.

In Raising Superheroes, Noakes points out that during the first two years of a baby’s life – the first 1000 days, as he calls it – the brain is growing at its maximum rate. It requires dense nutrition to build its fatty structure and requires a dependable energy supply.

Key to both these processes is the supply of ketone bodies from fatty acids recently consumed, or stored in body fat. The best sources of such rich nutrition are found in foods such as chicken, sardines and eggs. These are all common foods, readily available at reasonable prices in our supermarkets.

The nutrient composition of these foods is typically in the order of 10  to 100 times denser in nutritive value than found in recommended baby food cereals (see page 327 of Raising Superheroes, reproduced courtesy of Zoe Harcombe from USDA data).

In his evidence on February 15, Noakes showed that the South African dietary guidelines, produced by the very experts that testified against him in the hearing, completely agree with his advice to wean infants onto these foods. Indeed they also describe the danger of over-reliance on nutrient-poor cereals in the infant diet.

This begs the question as to why these same experts now contradict their own scientific work in criticising Noakes’ campaign to convert our citizens to real food. Is it because they are beholden to the processed food industry?

It seems clear from the evidence that a so-called balanced diet is not likely to be a diet that involves carbohydrate as a significant contributor to the weaning infant’s daily requirement for its energy needs. But more importantly, if we deviate from the ideal diet, which direction – towards or away from carbohydrate – is likely to result in long-term damage? The conventional answer is that the LCHF diet, while it may work in the short term to reduce weight, is untested over the long term.

Contrary to their own scientific work (presented by Noakes at the hearing), conventional dieticians, represented at the hearing by NorthWest University Prof Este Vorster, claim that fatty foods will eventually result in vitamin and mineral deficiencies, and more particularly, in atherosclerosis and heart disease.

What this journey into the research has shown is that the science is telling us the exact opposite story. The diet with the longest history is the LCHF diet and the underlying adaptation of Homo sapiens occurred in the 2.3 million years before civilization. Cohort studies show that people on the LCHF diets, just like their more primitive ancestors, return improved results for dietary health across all the key indicators of metabolic health.

We can conclude that if we intend deviating from what we think is a balanced diet, the safer, less risky course, would be to err on the side of introducing our weaning infants to a diet lower in carbohydrates and higher in healthy animal-based fats.

In conclusion, Prof Noakes goes further: “There is no biological need for carbohydrate. In particular, sugar is not good for your health and should be completely removed from the diet, especially from the diet of infants.”