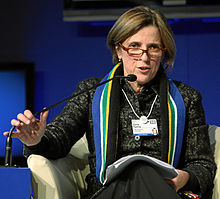 The timing was most unfortunate. Not just for us on Power Lunch, but for the ABSA Group itself. Key point of the SA bank’s results for the half year to end June, was the declaration of a Special Dividend that will distribute R5bn to shareholders. With another R2.5bn payment declared through the 11% higher interim dividend (more than the HEPS growth of 8%), the retail bank’s shareholders are to receive cash of R7.5bn in the next few weeks. The lion’s share to Barclays Plc which will pick up R4.67bn from its SA subsidiary’s distributions – R1.37bn thereof flowing directly from last week’s R18bn all-share deal on its African operations, increasing its ownership of ABSA to 62.3%. The unfortunate timing came through near simultaneous disclosure by Barclays that because of the £2bn cost of settling mis-selling of products to small business clients and its overall capital shortage, ABSA’s UK parent needs shareholders to pump in a massive £5.8bn in fresh capital. This announcement of the third biggest rights issue in UK history took almost 6% off the Barclays share price. ABSA’s share price also dropped sharply after the release of its results as analysts here were disappointed by its lack of top line growth. For our team at CNBC Africa, the unfortunate timing was ABSA’s communications schedule which meant the best they could do was offer CEO Maria Ramos for a short telephonic interview. With so much at stake, an in-depth studio interview would have worked so much better.

ALEC HOGG: Good news perhaps for ABSA shareholders: an 8% rise in interim headline earnings to 649 cents, primarily as bad loans declined.  The shares of ABSA though have fallen by more than 4% in early trading today.  We have Maria Ramos, the Chief Executive of ABSA on the line to us now on a very busy day for yourself and your parent, Maria.  I guess the timing is a little unfortunate; Barclays coming out in London to say that it’s raising or going to shareholders for the third biggest rights issue ever in UK history – £5.8 billion – and here in South Africa you declare a special dividend.  So us suspicious types say: Why are you giving Barclays all this money?

ALEC HOGG: It certainly helps them (Barclays), though.  R4.67 billion they’ll be getting from ABSA if my numbers are correct.  So they might have had an even bigger rights issue if it wasn’t for your support.

MARIA RAMOS: No.  I don’t think that that’s how it works and I think the other thing you need to consider is that

that’s not quite how the ABSA board (of directors) operates and that’s not how we make decisions about how to pay dividends either.

ALEC HOGG: That’s important.  How does the ABSA board operate in a case like this?

MARIA RAMOS: Well, let’s just…I think it’s important to remind ourselves that ABSA is separately capitalised and we have got strong capital and we’ve had strong capital for quite some time now.  We have a very cash-generative business and we’ve been that for quite a while. So even after we’ve made this dividend payment and the special dividend, we are still going to end up with a Common Equity Tier 1 ratio which is above the board’s Common Equity Tier 1 ratio guidance and so we’re going to be in a strong capital position going into the future.  So our own board here in South Africa and our own business in South Africa and the combined business which is regulated primarily by the South African Reserve Bank looks at capital and the capital we need in order to grow the business and to sustain the business and looks at that and says “can we afford to pay dividends?  Is this business sufficiently well-capitalised?” and makes a decision on that basis.

ALEC HOGG: That’s fully understood.  I’ve been covering banks though, for 30 years and I can remember a lot of rights issues, a lot of times that banks have had to go to shareholders and ask for additional capital.  I can’t remember too many times when they’ve paid special dividends but perhaps you can refresh my memory on that.

MARIA RAMOS: Well I can’t, off the top of my head, refresh your memory on that because we didn’t go and have a look at when the last time was that a bank paid a special dividend although I think there have been a couple of times in…probably in…I couldn’t tell you off the top of my head. But there probably are a couple of times when banks have had excess capital that they’ve paid.  I just know that we have been in a strong capital position and we’ve had this conversation a couple of times – both with our own shareholders importantly, with our own board and with our own regulator and we’ve been able to return capital to shareholders because we’re well-capitalised and we’ve got sufficient capital for our own business needs and to grow our business well into the future.  And as I said earlier, even after this we will still be in a position where we’re well within our Board guidelines.

ALEC HOGG: It’s interesting.  We’re talking about the special dividend and it’s R7.08.  The market or your shareholders were actually hoping for more according to the reports that we’re getting from the wire services.  They were expecting it to be as high as R8.00 a share. So it’s a contrasting conclusion that the market came to this morning, and dropping your share price by 4%: Does that disappoint you when you have a look at the operating results which actually look pretty solid?

MARIA RAMOS: No.  I mean again, I think it signalled to the market as well as we could that we were looking at returning capital; that we were considering a special dividend.  We obviously couldn’t be very specific about the quantum of that special dividend but it was always going to be – more or less – in the region of R6bn and I think what we have indicated today and what we have done today is paid a special dividend.  I think our ordinary dividend is up 11% which is above our headline earnings (growth) and I think we’ve also indicated today that we think that into the future we are in a position, we think, to continue paying solid dividends and I think that that’s important.

* Alec Hogg is an online publisher, writer and broadcaster. He is also a Business Keynote Speaker – details at www.alechogg.com