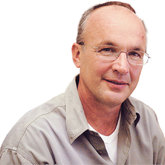 It’s not as well known as it should be, but the real online publishing pioneer in South Africa is Kevin Davie, consulting business editor of the

M&G. Kevin launched the country’s first news portal, WOZA, in the mid 1990s and built it into the Goliath of the early web age. He gave me my entry into online publishing by encouraging me to run my column Boardroom Talk on WOZA and, after a couple years, suggested that I start my own site, even proposing the name of Moneyweb. Sadly, WOZA became part of the early web roadkill and through a combination of good luck and its JSE listing, Moneyweb developed into a mainstream player. Kevin is one of those quiet geniuses who doesn’t know how to grab any credit for himself. So it shouldn’t surprise anyone who knows him to hear that he invests back in his industry by teaching journalism at Wits University. I was honoured when  asked me to do a 15 minute “TED talk” to his students at the annual FinWrite Workshop on July 5 this year. I chose to speak about what the journalist of the future will look like, drawing on how other industries have changed after barriers to entry have collapsed. The contribution was called Journalist 2.0. Here’s the video.