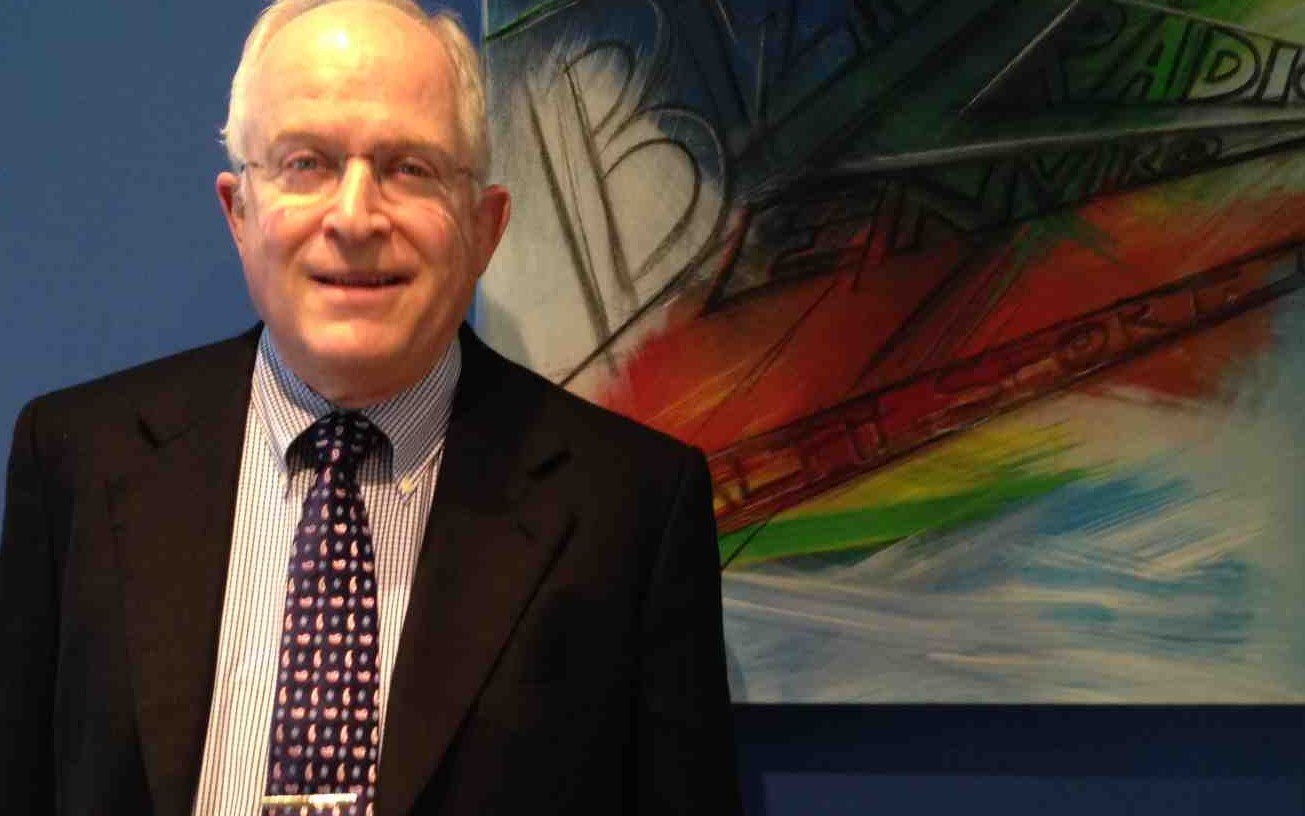 New Yorker Joel Stern has been a regular visitor to South Africa for over three decades. He stays in touch through a teaching commitment at UCT and by servicing a number of SA corporate clients. Known globally for his invention of the widely used EVA concept (Economic Value Added), Stern has the gravitas to make people sit up when he talks. Right now he’s discouraging the dismissal by South Africans of the downgrading of Capitec and then the Big Four South African banks by credit ratings agency Moody’s. Rather than shooting the messenger, he says, bank directors should call for detailed information  on bad debts, redouble their efforts to get to a better handle on the underlying situation. Use the downgrade as a warning rather than a criticism.  Judging by the comments under the link from my Facebook Page which is republished below the transcript, many members of the Biznews community agree (including a former DHS boy Natalians believe to be the best batsman ever born)  – AH

GUGULETHU MFUPHI:  Joining us now in the studio to discuss the current global economic issues is Professor Joel Stern, Chief Executive of Stern Value Management and visiting Professor at the University of Cape Town.  It’s good to have you with us.

ALEC HOGG:  How long have you been coming to South Africa, Joel?

PROF JOEL STERN:  Actually, I joined the faculty at the University of Cape Town in 1978 and I’ve been coming ever since. Well, ’78 to ’85 and then, since our firm had many clients in Johannesburg at that time, it became really uneconomic to teach down there and have the business in Johannesburg.  I changed schools at that time, from ’85 to’97.  I was at Wits, thanks to Andy Andrews, by the way.  Andy was the one who asked me to come over, which I did.  When my very good friend, Colin Ferrer, left Wits and went to Cape Town, he said ‘it’s time for you to come back’.

ALEC HOGG:  Joel, ratings agencies: it’s a big story in South Africa at the moment.  I don’t think any South African is happy with the way that Moody’s has been acting.  What would guide their process into bringing in the downgrades that they have in the past few days?

PROF JOEL STERN:  Well, the same thing that happened when they did the same thing to the United States – remember, during the financial crisis – we got whacked, only by Moody’s.  S&P and Fitch stood by.  Do I think Moody’s was wrong?  I don’t.  We were on the verge of a global depression.  We were saved from that by very sensible policies, by our Reserve Bank – the Federal Reserve.  At that time, it looked really dire and I think that the value of a downgrade is that it gets the senior management of the banks to take another look at themselves.  It was very helpful.

GUGULETHU MFUPHI:  Alec also mentioned at the top of the show that given the WEF stats, South Africa’s banking fraternity is highly regarded and well respected, so how do you match that?

ALEC HOGG:  In terms of security of its banks, the WEF rates the banking system here number two in the world, behind Canada.  We’re not America.  We didn’t have a bailout.  We didn’t have to have all of these things happen here.

PROF JOEL STERN:  By the way, it’s not just America – please.  As soon as that happened in America, we were being criticised by the Europeans.  I knew, because we had clients and friends and the people on the French television after me with a pickaxe.  I looked at them and I said ‘you think it’s a problem in America.  It’s coming here, too’ and in no time at all, they were in bigger trouble than we were.

GUGULETHU MFUPHI:  Is there a problem in South Africa?

PROF JOEL STERN:  Well, I don’t know.  I think what you have to do is this: the bankers have to ask themselves about the quality of their loan portfolio.  What they really need is a risk index that they use inside the bank.  If they had a risk index that was implemented by, for example, the Reserve Bank, if all the banks had to do the same type of things when reporting to the Reserve Bank on their credit quality, all they’d have to do is submit what their number was and it could be audited by their audit firm.  They would come out and say ‘hey, we’re at 1.86.  We shouldn’t be criticised’, but there is no such thing in South Africa and it is needed.

ALEC HOGG:  But we do have write-offs.  We recently had Nedbank who came out with… In fact, their bad debts had gone down a little, from their previous period.  Although we do have an economy under stress, it’s not anything like the kind of pressure that would require a downgrade.

PROF JOEL STERN:  Alec, look at me.  Do I look like a free enterpriser to you?  Of course, I’ve been one all my life. But when it comes to bank, regulation it’s different if the Reserve Bank says ‘I want the following report’.  It’s quite different when the bank is negotiating with their auditor, ‘should we write that off or should we not write it off’.  You see, if you’re an auditor of an organisation, you have to balance your decision to ask for something that the bank does not want to do against the likelihood that maybe someday you will lose the audit.  In other words, there’s a conflict of interest there all the time.  The Reserve Bank does not have that, by the way.

ALEC HOGG:  Might Moody’s have some kind of an inside track to the auditors in a case like this?  They seem to be out on a limb.

PROF JOEL STERN:  They were out on a limb in the United States too, but when I took a look…

ALEC HOGG:  But they had Lehman’s at AAA before Lehman’s went bust.  It’s all very well, coming to the party later.

PROF JOEL STERN:  Learn from the example.  They say to themselves ‘listen, we’re not going to let that happen to us again’, they take a look at South Africa, they look at the bank etcetera, and say ‘oh, this does not look good to us’.  What do they do?  They might have moved too soon for your pleasure.  Okay.  However, what if it turns out that this was a blessing in disguise, that it got the bank managements and boards to say ‘if I were a member of the board of any bank in South Africa right now, I would be saying at the next board meeting, I want the equivalent of a risk index done on our portfolio.  I won’t settle for less’.  Incidentally, when I was a part of the Chase Manhattan Bank back in the 60’s and 70’s, I encouraged that inside the bank.  I said ‘listen, we shouldn’t be turning people down for loans.  We should be learning how to price the risk, so we get the right rate of interest for the risk we’re taking’.  That’s what they need.  They need to see whether they’re still okay on a risk-adjusted basis.

ALEC HOGG:  He’s the Chief Executive of Stern Value Management, visiting Professor at the University of Cape Town and the inventor of EVA, one of the concepts and terms that is used all around the world now – a regular visitor to our shores and giving the banking directors pause for thought, and perhaps not just them.  Many of us who’ve been criticising the Moody’s downgrade…  Perhaps it is an opportunity to have a reassessment of exactly where South Africa’s banking system stands. 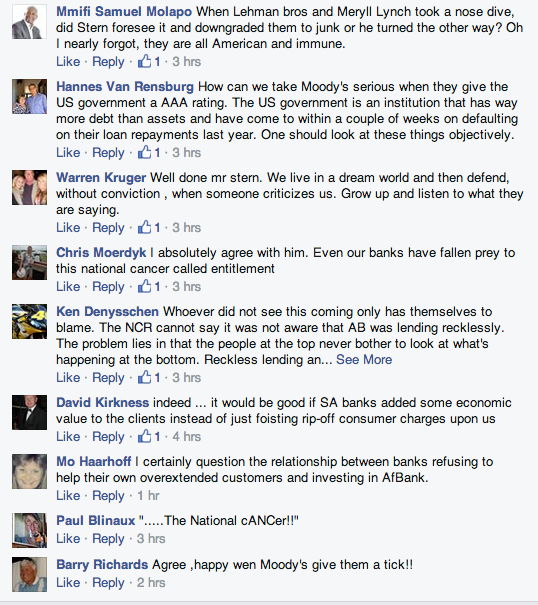