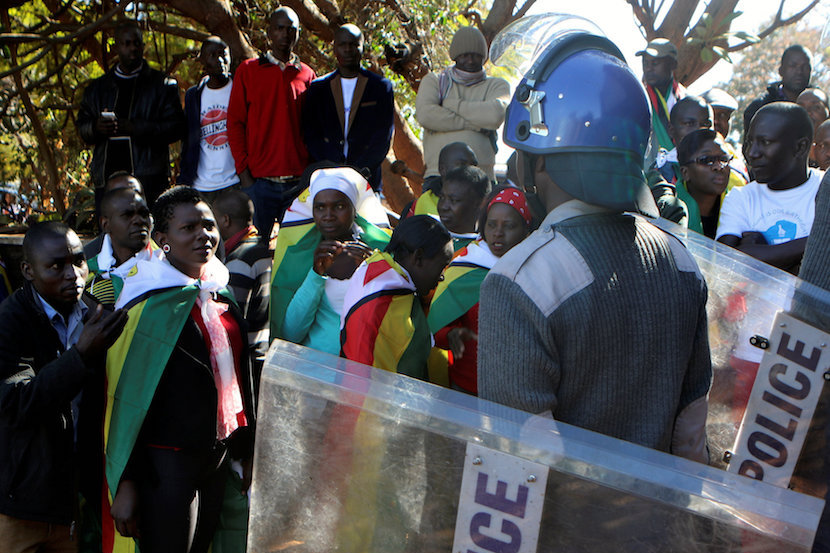 South Africa’s largest labour federation has lended its support to the protesters in Zimbabwe. But in doing so, it’s broken ranks with the ruling ANC party, whose secretary general Gwede Mantashe feared ‘sponsored elements’ were seeking regime change. It’s not the first time the two members of the tripartite alliance have disagreed. But it comes at a time where the ANC is facing scrutiny, with the municipal elections only three weeks away. And more so following Gauteng boss Paul Mashatile’s call for reform, or the party faces a bleak future. They say be careful of those you keep company with as you’ll get tarred with the same brush. And with the Zimbabwe situation as dire as it is, it’s also important to remember that history only repeats itself if no one listens the first time. – Stuart Lowman

Johannesburg – Labour federation Cosatu on Wednesday broke ranks with the ANC on the protests in Zimbabwe, by expressing its support for the protesters.

“Cosatu urges the people of Zimbabwe to continue with the struggle and not to watch idly while the government tramples upon the rights of workers and ordinary citizens,” Cosatu international relations secretary Bongani Masuku said.

Zimbabweans had tolerated their government’s violation of their rights for too long, he said.

“Such co-ordinated mass action is the only language that unresponsive regimes understand,” Masuku said.

The labour federation met its Zimbabwean counterpart, the Zimbabwean Congress of Trade Unions, in Johannesburg on Wednesday.

Cosatu asked that those detained during the protests be released. They included pastor Evan Mawarire, one of the main drivers of the #ThisFlag movement. Mawarire appeared in court on Wednesday and was charged with inciting public violence.

Zimbabwe’s ruling Zanu-PF party, which the ANC considered a fraternal liberation movement, had attributed the #ThisFlag and #ZimShutDown2016 protests to foreign interference.

The protests are aimed at getting the government to act on the dire economic situation in the country, which have resulted in some civil servants not getting paid.

Masuku said Cosatu was still considering its options about any actions of solidarity.

Zimbabwe’s government had committed “serious socio-economic atrocities” against its people for years, with the latest being the cutting off of people’s livelihoods. This was due to the ban on imports of basic commodities, and attempts to bring valueless bond notes into circulation.

Masuku said the current “heavy-handedness of the Zanu-PF regime in dealing with perceived enemies” was similar to that of Operation Restore Order/Murambatsvina in 2005.

“Houses were demolished, people were displaced and thousands were rendered jobless as a result of company closures instigated by poor investment policies and a generalised crisis of poor economic management.”

#COSATU also castigates the brutal manner in which the Zimbabwe Police treated protesters in custody.

Cosatu urged trade unions, civil society and pressure groups in Zimbabwe to stand up against public injustice and corruption.

The Zanu-PF government should attend to the issues raised, instead of resorting to populist rhetoric. The masses had the power and right to determine how they should be ruled.

Cosatu said, due to the unemployment in Zimbabwe, its citizens were “scattered around the region”, a clear sign of its government’s failure to serve its people.

Zimbabwe’s government had to create employment and meet the basic needs of its citizens to stop civil strife. – News24