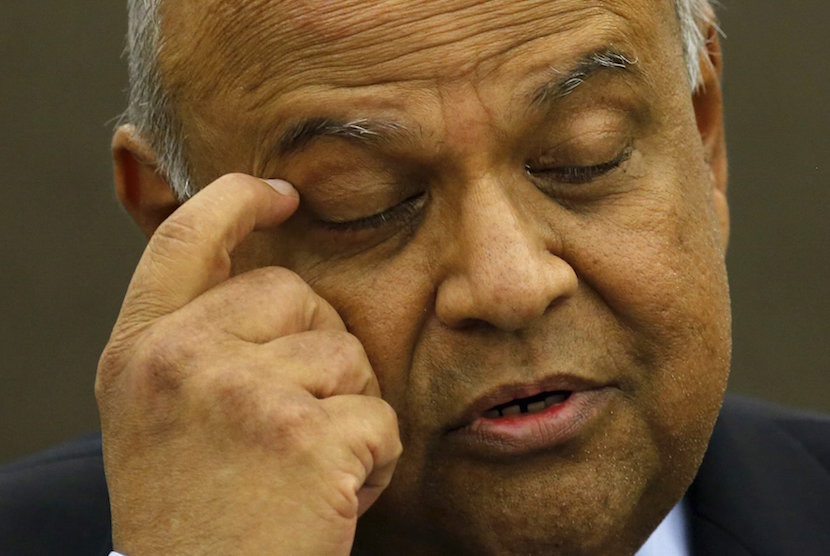 You’ve got to admit: it’s strange for a finance minister to have a private meeting with a company CEO over the commercial organisation’s banking arrangements. As Pravin Gordhan, South Africa’s Minister of Finance, said himself in Parliament today, when responding to questions about his links with the Gupta family and its Oakbay Investments: Oakbay has recourse through the legal system if it thinks it has been wronged. It is also not every business person who puts in a call to the finance minister and gets a hearing. Yet, it was remarkably easy for Oakbay Investments’ CEO Nazeem Howa to arrange a meeting with Gordhan. An overview of the meeting was provided by Gordhan, but it’s not yet clear why the finance minister thought it was necessary to meet Howa. The rich Gupta family – close associates of President Jacob Zuma’s family – are behind Oakbay, which in turn is at the centre of controversial deals involving state enterprises and state capture. Commercial banks have refused to provide Oakbay with funding. Let’s hope this meeting looks better than it smells after all the details are made public. – Jackie Cameron

In a parliamentary question posed by the DA’s David Maynier, Gordhan said he had met with Nazeem Howa, CEO of Oakbay Investments on 24 May. He was accompanied by National Treasury Director-General Lungisa Fuzile and three other officials, including the Treasury Legal Counsel.

The purpose of the meeting was to discuss Oakbay’s request that he intervene in the company’s dispute with a number of banks so as to avoid possible job losses that may arise as a result of the closure of the bank accounts held by Oakbay and its associated companies, according to Gordhan.

He was not aware of any other dedicated meetings between any person from the National Treasury and Oakbay, bar for the one that had taken place on 24 May.

In his response, Gordhan declined to deal with the matter raised in a public statement made on 16 March by Deputy Finance Minister Mcebisi Jonas, detailing how he had been approached by a shareholder of Oakbay who offered him the position of Minister of Finance to replace former Finance Minister Nhlanhla Nene.

Here is Pravin Gordhan’s reply to my parliamentary question on his interaction with Oakbay Investments (Pty) Ltd! pic.twitter.com/ApvSdyuyh8

In April this year, Jeff Radebe, minister in the presidency responsible for planning and monitoring said in a cabinet statement that three ministers – Gordhan, Mineral Resources Minister Mosebenzi Zwane and Labour Minister Mildred Oliphant – would meet with Oakbay, following the termination of its relationship with South Africa’s four big banks.

FNB, Absa, Standard Bank and Nedbank notified Oakbay earlier this year they would no longer provide banking services to Oakbay or its subsidiaries, while listing sponsor Sasfin Capital and auditing firm KPMG also cut ties with the company.

“The only purpose of the meeting was to hear the view of Oakbay on the closure of its accounts,” Gordhan said in his response.

“The only decision out of this meeting was for Oakbay to provide the Treasury with any relevant information to support its allegations and to continue to engage in good faith.”

Gordhan said in his meeting with Howa he pointed out how the banking system in South Africa worked.

“The banking sector is highly regulated, and any failure of our banks to comply with international regulatory standards could have devastating effects on the banking system, financial stability and the economy as a whole,” Gordhan said.

Banks are subject to tough and intrusive international standards such as Basel III, 2003 United Nations Convention Against Corruption and anti-money laundering obligations.

Overview of the Financial regulatory framework for banks in South Africa

Oakbay demanded an explanation from banks for their decision to sever ties with the company.

In addition, Oakbay circulated a conspiracy theory in which it claimed that South African banks are under the control of the Rupert family.

The company also suggested that there was a conspiracy between Treasury officials, foreign governments and white business, Business Day reported.

Gordhan pointed out in his response that the banks were not at liberty to discuss the reasons for their decisions to end the relationship with Oakbay.

“There are legislative and regulatory impediments to any registered bank discussing client-related matters with the Minister of Finance or any third party,” Gordhan said.

However, Oakbay (unlike banks) is free to provide any reasons or information it has received from any bank when closing their accounts.

Molefe: I am captured by the constitution, not Guptas – NEWS & ANALYSIS | Politicsweb https://t.co/VUqUtTdGdT

According to Gordhan, Oakbay’s Howa stated that no bank had provided any reasons to Oakbay for the closure of their accounts.

“I pointed out that the best, and only, course of action for any corporate client would be for the company to approach a competent court to seek the reasons for the closure of their accounts, and to establish its rights and to deal with any alleged transgressions of the law or of the Code of Banking Practice, which cover the process that banks have agreed to when closing accounts.” – News24

Gordhan confirms meeting Oakbay CEO & telling him that he can’t help them with the banks, they should go to court. pic.twitter.com/2sjHQ7oNPm