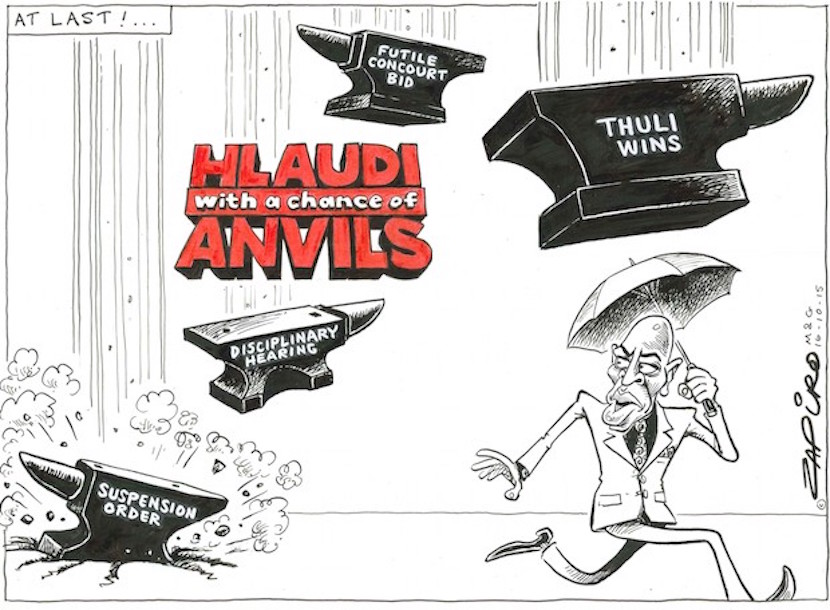 Controversial SABC boss Hlaudi Motsoeneng and the SABC board have defied a court ruling by reappointing the propaganda czar to a position of power – and some within the ANC are not having it. ANC chief whip Jackson Mthembu reacted angrily to developments this week, saying that the ANC had not deployed Motsoeneng. He said that the ANC would ask the SABC board to resign and, failing that, South Africa can expect an inquiry into the hiring processes at the SABC. Instituting a formal inquiry seems like a great waste of time and money as it is patently obvious that Motsoeneng is not fit for any job in charge of others; his public musings create the impression of someone that is drunk on his own power and, as a result, not thinking straight. The man who is in line for a R33m bonus on top of his already large salary arrogantly told the nation this week that he planned to have big parties and would require additional funds to do so – all that while also musing out loud that he works miracles and is a high-value media brand. Motsoeneng’s power undoubtedly comes from his connection to President Jacob Zuma, whom he has supported over the years. With President Jacob Zuma and his associates seizing control of a range of state entities, it seems likely that it may well come to taxpayers having to fork out additional funds to eject Motsoeneng from his pricey seat at the SABC table. – Jackie Cameron

Cape Town – Hlaudi Motsoeneng does not enjoy the protection of the ANC, nor has the party deployed him to the public broadcaster, chief whip Jackson Mthembu said on Wednesday.

The SABC’s newly-appointed group executive of corporate affairs was a “non-employee” who was given the post without due process having been followed, he told reporters at Parliament.

He called on the SABC board to rescind the appointment.

“It should not have happened in the first place.”

Mthembu said the ANC’s records would show the party did not deploy him.

“I can assure that whatever protection somebody might enjoy, it will not come from the ANC.”

The party wanted people who were rationally appointed. He continuously referred to Motsoeneng’s appointment as “miraculous”.

Respect the rule of law

It was not only a question of protection, he said, but also of respect for the courts.

Mthembu said if courts declared his appointment as chief whip irrational, logic would dictate he could no longer be an ANC employee.

“It simply means that Jackson Mthembu no longer works here, finish and klaar. If we do something else, we are unlawful in our conduct. That’s my logic; let’s just respect the rule of law.”

The ANC Chief Whip made same threats about the SABC board before. Let's hope this time there will be action. Bring them to Parliament ASAP!

The SABC board had a lot to answer for and the ANC wanted an inquiry into its fitness.

These included its appointment processes, and how Motsoeneng ended up back in a senior management position, after the courts had declared his appointment as COO unlawful.

Not fit to govern

The board had been summoned to appear before Parliament in October. Mthembu said it was “not fit to govern”.

Talking about Motsoeneng’s “unlawful appointment”, he said employers needed to hire the best- qualified people who would provide value for money.

“What has happened at the SABC clearly indicated that we are dealing with another animal. We need to use other instruments at our disposal, not your day-to-day oversight mechanism. What is that animal at our disposal? That animal is an inquiry,” he said.

Most revealing #Hlaudi quote: To #eNCA reporter: 'Thulasizwe, I think you should come back to #SABC so you don't ask many questions.’

He was not sure if asking members of the current board to resign would work, but they would try, he said. An inquiry was the next-best option.

Mthembu said ANC members on Parliament’s communications committee, who had previously been seen as shielding Motsoeneng, would do what was right. – News24