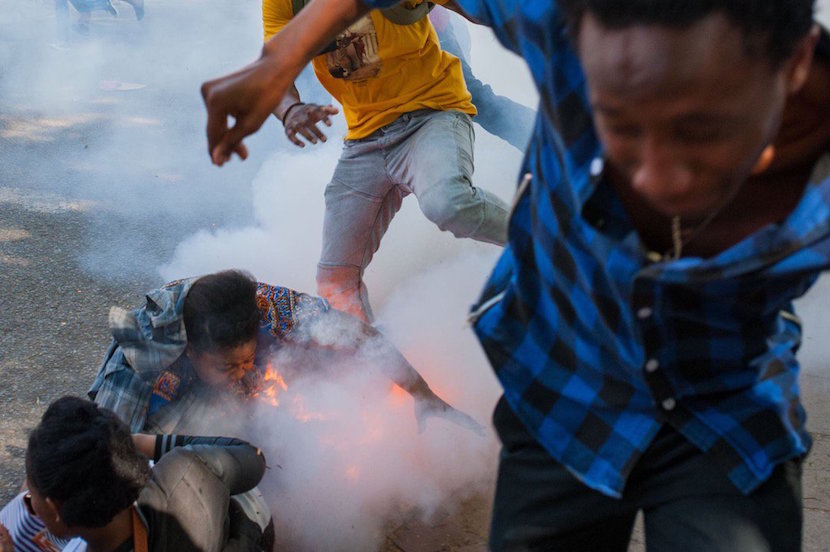 Student unrest shows no signs of easing across South Africa, which is surprising when you consider that more than 500 people have been arrested this year in connection with campus protest action that has turned violent. The high number of students facing crime charges underscores the scale of the revolt against tuition fees as well as the growing movement in favour of decolonising universities. Students may have started their mass action in the noble cause of helping the poor access tertiary education, but the demonstrations have deteriorated to the extent that property has been destroyed and lives have been put at risk. It is hard to feel sympathetic towards demonstrators who presumably have a minimum level of intelligence in order to qualify for university when they hurl human faeces to gain attention, as they apparently did at the University of Cape Town (UCT) this week. And it is hard to view students with respect when they intimidate other students and academics and spout idiotic comments for the world to see, as this group of UCT students did when punting the decolonisation of science. The university chaos is threatening the reputations of students past and present and will inevitably be deterring the handful of international students who might wish to study in South Africa. The best academics will be looking elsewhere in the world for opportunities to pursue their careers. Police are clearly cracking down now on student leaders where they can – and not a moment too soon as students have vowed to continue their protests. In the meantime, university leaders should be reflecting deeply on what they can do to play a part in sorting out this mess and prevent future demonstrations from spiralling out of control. – Jackie Cameron

Cape Town – A 24-year-old student was arrested during protests at UCT on Monday morning, police said.

He was arrested around 10:50 on the lower campus on a charge of malicious damage to property, national police spokesperson Brigadier Sally de Beer said.

The arrest came after around 200 protesting students damaged the Kramer building “by throwing stones and human faeces”.

“Police were forced to take action to quell the situation and the crowd was dispersed.”

The student would appear in the Wynberg Magistrate’s Court once charged.

On Monday, the university initially said it and several other institutions were declared a “level-three security situation” by acting national police commissioner Khomotso Phahlane. This, in effect, meant the public order unit was in command of the institution.

“Vice-Chancellors remain fully in control of the campuses and work with the SAPS to manage any situation where the SAPS may be needed,” it said in a correction statement.

In Monday morning’s statement it said: “We face a level of protest this morning which we are not able to contain with private security officers alone.”

“There are further reports of intimidation, damage to property, violence, disruption and confrontation with security officers and we need the support of SAPS’s Public Order Policing to manage the situation.”

According to students, who did not want to be named for fear of reprisals, the three – identified as Lizo Jim, Thandeka Tshabalala and Thanduxolo Nkala – were part of a #FeesMustFall strategy meeting in the Embizweni building on South Campus on Monday afternoon.

“We cannot comment further on the matter and the SA Police Service would be best placed to respond to queries on charges made against the students,” she said.

Requests for comment from the police were referred to national spokesperson Sally de Beer, who did not immediately respond.

The #FeesMustFall leadership were apparently strategising around what would take place tomorrow when lectures were set to resume.

#feesmustfall Why on Earth do you people think that this violent protesting is going to work? ONLINE STUDY WILL BE THE FUTURE. #NMMUshutdown

Video footage shows the police entering the meeting dressed in riot gear and singling out Jim, Tshabalala and Nkala and calmly escorting them out of the meeting before instructing the rest of the students to disband immediately as the meeting was unlawful.  It is believed the three will face charges under the regulations of the Gatherings Act of 1993, relating to an illegal march on the Nelson Mandela Bay Business Chamber two weeks ago, as well as relating to the illegal barricading of the main campuses on the 7th of October.

The FeesMustFall movement confirmed the arrests via social media and encouraged students not to go to the Humewood Police Station, as they had been warned that police had been instructed to capture any group that congregated outside the police station.

‘They will never arrest the struggle’

The group went on to say that, in light of the arrests, they would be cancelling the planned night vigil.
Members of the FeesMustFall movement condemned the arrests, saying that while the leadership might have been arrested, they would continue the fight.

Simnikiwe Ntingi posted: “They may have arrested the leaders, but they will never arrest the struggle. Qina mfundi.”

Mahlatse Sekwati posted: “Fed Upist are tagging each other and arresting our leadership won’t stop us, infact management is extinguishing fire with a petrol…”

SivileBathembu Loza Mayekiso posted: “They are adding fuel to the fire…ASIJIKI!!!”
These threats come after the Xanadu Melody XM Clubhouse was razed to the ground during the early hours of Monday morning.

Cape Town – A total of 567 people have been arrested during Fees Must Fall protests over the last eight months, acting national police commissioner Khomotso Phahlane said on Monday.

The charges included violence, intimidation, and malicious damage to property. The arrests were made in 265 cases, he told reporters.

He refuted claims that police were targeting specific individuals, as had been suggested in the case of axed Wits University SRC president Mcebo Dlamini.

This Mcebo Dlamini story is weird, the course is a good one but hearing that he now wants to be released so he can prepare… #FeesMustFall

“The role of the police is to prevent, investigate and combat crime and to maintain stability. Those who commit acts of criminality will be investigated and when sufficient evidence is obtained, arrests will be effected.”

He said Dlamini was arrested because he had allegedly committed a crime. It was investigated, a docket was presented to the National Prosecuting Authority, and a warrant of arrest was issued.

“On that basis, he was approached and invited to a police station, and he will remain in detention until the courts take a decision in this regard.”

Dlamini was expected to apply for bail in the Johannesburg Magistrate’s Court on Tuesday.

Phahlane stressed that claims, made on social media, that police had “taken over” control of universities across the country, were not true.

“We wish to place it on record that the Saps has not taken over operation control of any institution of learning the country. The management and security within the institutions of higher learning remain the responsibility of the university concerned.”

He however said police would continue doing their jobs, as determined by the Constitution, despite “irresponsible” reporting and propaganda spread through the media.

He claimed the latest allegations that female Wits students were attacked, assaulted and randomly shot at were untrue, and that no evidence was found to support them.

He appealed to anyone who had received such treatment to open a criminal case and to provide witness’s names and evidence to the Independent Police Investigative Directorate (Ipid).

Phahlane said a News24 journalist in Durban who was wrongfully arrested two weeks ago had the right to file a complaint with Ipid. Officers snatched Kaveel Singh’s phone and deleted images he took.

He said this was not allowed.

“If a case has been reported with the police it will be investigated, and if any one of us have been found to have contradicted our disciplinary code, he or she will be dealt with.” – News24