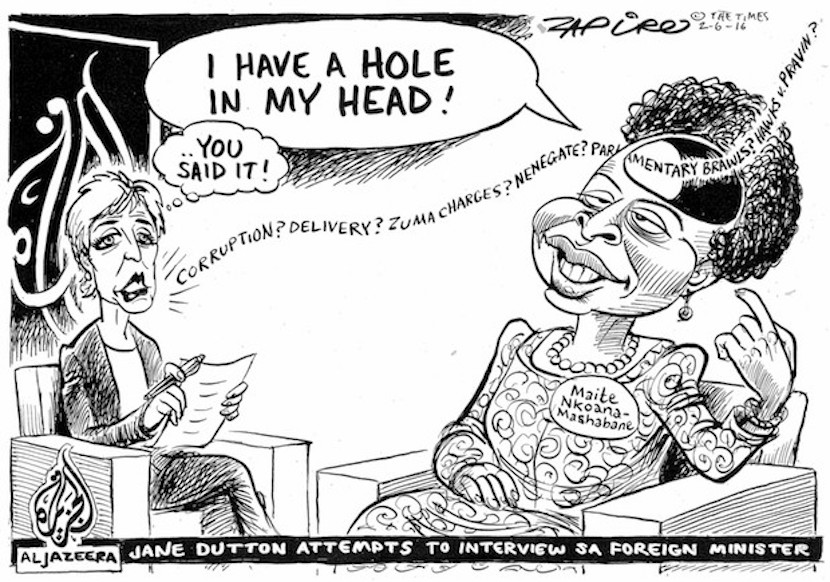 International Relations Minister Maite Nkoane-Mashabane made a peculiar statement earlier this year that a watering can had left a hole in her head. Her critics are more concerned about a hole in her department’s finances – a very big hole. Nkoane-Mashabane has ducked out of answering questions about overspending and a failure to keep adequate records on literally hundreds of thousands of assets spread across the world. The third problematic audit in a row indicates that the finances in this ministry are highly irregular and at best shambolic. The ANC should do the right thing and axe this minister, because it is clear she is unable to look after the country’s international assets. What’s more, she is not prepared to be accountable for her actions. Culling staff and pruning international operations would help the country find funds for the most pressing needs. Most likely the ANC will allow her to continue chewing up taxpayers’ money, though, for Nkoane-Mashabane is another Zuma acolyte and South Africa’s extensive international operations have provided cushy jobs for Zuma supporters. This was highlighted in a recent report into the whereabouts of the individuals involved in the controversial landing of a commercial aircraft taking guests to a private family wedding at an airforce base. An investigation that also explored the alleged involvement of President Jacob Zuma in allowing his friends, the Guptas, to use the base ended in the fall guy and investigators being appointed to well-paid positions as ambassadors. If you think SAA’s Dudu Myeni is costing the country billions of rands while protecting her benefactor, try Nkoane-Mashabane for size. – Jackie Cameron

Cape Town – MPs have slammed International Relations Minister Maite Nkoane-Mashabane for not pitching up at a portfolio committee meeting to account for the department’s third straight problematic audit.

The committee met in Parliament on Wednesday to hear the department present its annual report for 2015/16, but were left dismayed after the minister failed to show up along with the department’s delegation.

The African National Congress, Democratic Alliance and smaller party MPs were unanimous in their disapproval, saying dates had been predetermined beforehand.

“A minister must come and account. Who’s going to answer for the findings of the auditor-general?” ANC MP Bhekizizwe Radebe told the delegation.

“It’s embarrassing, chair. The senior members are supposed to implement action plans devised by them. [But] they don’t turn up for the meetings.”

The committee had rescheduled the meeting to cater for her, DA MP Stevens Mokgalapa said.

“The minister hasn’t come to account to us why they have had three qualified audits,” he said.

“We are unhappy with the conduct of the minister and we should write to the deputy president and chief whip to express our disgust.”

ANC MP Loyiso Mpumlwana said if there had been confusion around dates, the department should have explained her absence.

‘Don’t chase us back to Pretoria’

African Christian Democratic Party MP Cheryllyn Dudley said the minister’s non-appearances sent a message that the matter of three straight qualified audits was not important to her.

Deputy Minister Luwellyn Landers, who led the department’s delegation on behalf of Nkoane-Mashabane, said he noted the committee’s frustration, but wanted it to treat the available department officials with respect.

He said he had been a part of previous delegations that were “chased back to Pretoria” by portfolio committees, without presenting for similar reasons.

“Without that mutual respect, you’re going to have unnecessary tension. There is already tension between legislature and executive.”

He said he noted the committee’s criticism and “strong feelings”, and would relay them back to the minister.

The committee heard earlier in the day that the Auditor General had noted a serious regression in the department’s audits over the last five years.

The committee’s content advisor told them that the Auditor General had found various weaknesses in the department, which included challenges in leadership, governance, and consequence management.

Minister Maite Nkoana-Mashabane looks punished from her globetrotting. She even speaks like her boss.

There was also a lack of accountability and discipline by senior management involved in financial reporting.

A total of R720m needed to be supplemented to make up for the increase, which was mostly due to volatile currency differences in 2015, they explained.

There was also a serious problem in tracking the department’s 270 000 assets across the globe, and an audit was necessary to list these.

The department had spent R962m on 700 property lease agreements around the globe.