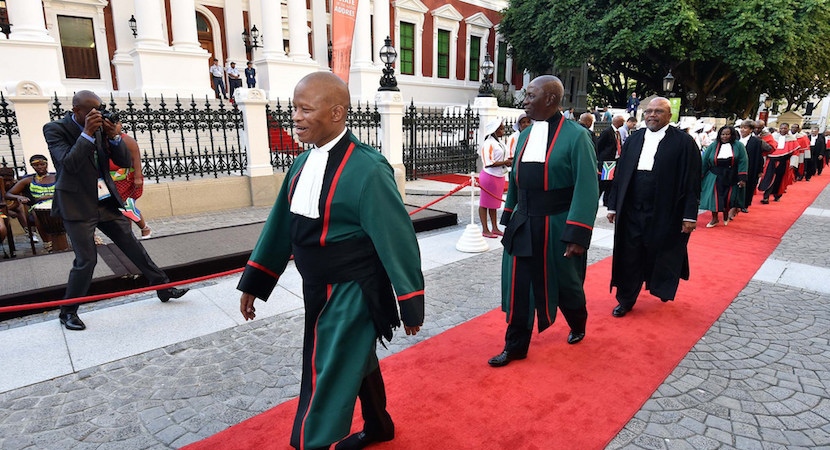 It’s easy to dismiss #FeesMustFall student protesters as hooligans who are behaving irrationally to promote an impossible cause. But South Africa’s Chief Justice Mogoeng Mogoeng has called on people who do not agree with the #FeesMustFall demonstrators not to label them as crazy as this will only lead to hardened attitudes. He recommended talking to students as a way of resolving the university crisis, which has led to hundreds of arrests following the destruction of property and acts of intimidation and violence. In a similar vein, KwaZulu-Natal Premier Willies Mchunu has also flagged up the necessity of taking a deeper, more constructive look at the issues that are angering students. While tuition fees are beyond reach for most, ultimately young people know that a qualification based on training and education that equips them for work is the only ticket out of poverty. Mchunu highlights the uncomfortable truth about South Africa: higher education qualifications are a rarity. In his province, for example, only three out of every 100 adults have accredited tertiary qualifications. This in turn highlights that the government has failed young people on a grand scale by choosing to neglect investing in and prioritising the education system – from primary school up. Education is a long game; it’s not particularly sexy as an instant crowd-pleaser. But when it has been neglected, as it has been in South Africa, it can only lead to hardship, social problems and, ultimately, anger and social instability. Students aren’t being unpatriotic, is Mogoeng’s message; they are crying out for political and sector leaders to come up with solutions. – Jackie Cameron

He was paying tribute to former ANC president Oliver Reginald Tambo on what would have been the struggle icon’s 99th birthday. Tambo died in 1993.

Mogoeng spoke of the much-lauded values the long-serving ANC president displayed, telling guests at the event that although he had never met the leader, he learnt of him from a very young age.

During his talk Mogoeng also spoke of the current protests for free quality higher education at the country’s tertiary institutions.

“We must never give students the impression that they are crazy,” said Mogoeng. “We must engage them and explain to them.”

Mogoeng said no one could claim to have a solution to the protests, but said this was an opportunity for South Africans to operate as a collective in seeking solutions to the issue. He added that he was weary of defining it as a crisis, but wanted to view it as a challenge instead.

The Chief Justice also decried those who criticised the demonstrations from afar. He said even if leaders disagreed with students, it was important to engage them to find solutions and stop the destruction of property.

“Students must be engaged. If we condemn students from afar without any meaningful engagement, we can only harden their attitudes.” – News24

Less than 3% of KZN adults have accredited tertiary qualifications – premier

Durban – KwaZulu-Natal Premier Willies Mchunu has called for more focus on the education sector, saying that less than 3% of adults in the province have an accredited tertiary qualification.

“In KwaZulu-Natal education and skills levels are very low and less than 3% of the adult population of KZN has an accredited tertiary qualification.”

Mchunu made the remarks on Thursday ahead of a meeting with vice chancellors, academics and others involved in the education sector.

According to Mchunu, the education sector needed attention.

“We need to examine stability and the future of our higher education sector in the province. We must ensure that our education system produces the required number of skills needed to various sectors of our economy.”

Mchunu said the education sector was pivotal to the economic success of the province and the country.

“There is a strong realisation that we will not achieve our job creation targets if our people are not appropriately skilled to take up the new opportunities we are creating in various sectors of the economy.”

He said skills development programmes had to be “accessed by people throughout the corners of this province”.

“There should be a strong focus on scarce skills such as engineering, science and technology, accounting, information technology, agriculture, health and social services.” – News24

Johannesburg – Absa Bank has donated R10m toward supporting “missing middle” undergraduate students at the University of the Witwatersrand.

The money would be allocated for the funding of at least 250 students.

It is in addition to the annual R2m, 10-year sponsorships of 20 Wits bursary students who are contracted to be employed by Absa on completion of their studies.

“Wits University and many of the other universities offer quality degrees that are well recognised in the world, and we produce world-class professionals. If we are going to keep our universities functional and retain the quality, then we need to ensure that we get all the stakeholders participating in the university system. The private sector is one such participant.”

“The first is as a donor to support scholarship. The second is as partners where they support research by establishing research chairs and having corporate research arms established at universities. And third, and very importantly, [is] working with us in rethinking our curriculum.”

“We need to constantly innovate in our curriculum, and having private sector engagement in our curriculum committees is absolutely important in facilitating a curriculum that speaks to the realities of the economy, of the corporates and to the skillsets that our students require.”

Absa CEO Maria Ramos said the company felt it had a responsibility to contribute while long-term solutions to higher education funding were developed.