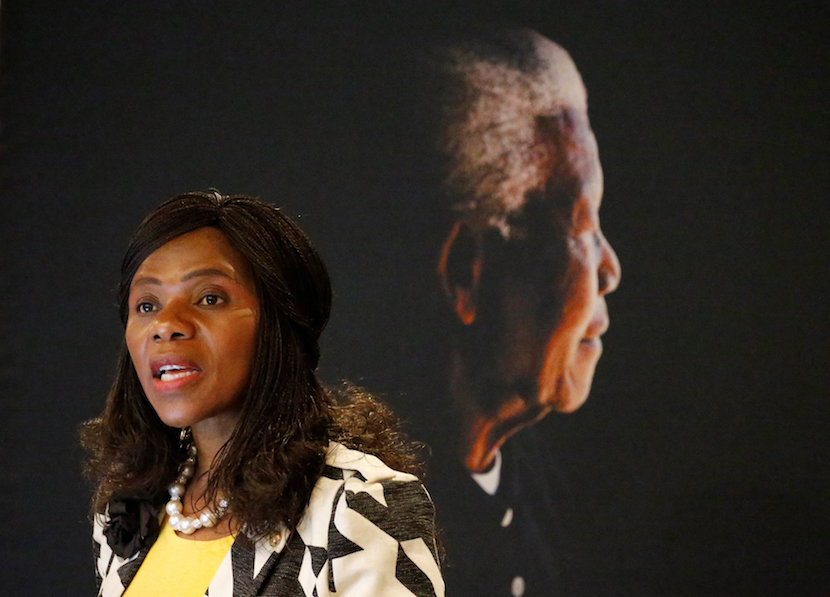 With the wisdom of hindsight, former Public Protector Thuli Madonsela, regrets having listened to advice from the broader legal community to ‘tread softly’ with her report to avoid a successful legal parry in the courts. The bombshell report, which puts most of the pieces in the puzzle together via some sterling detective work on cell phone records and damning interviews with high-level political players, did more than enough to stand on its own two feet upon judicial review. The Gupta links and the scale of state capture are breath-taking and make sense of all the ongoing sensational media leaks. Madonsela’s initially-stifled swan song is music to the country’s ears and its echoes will resound for decades to come. She really needn’t have toned anything down nor treaded so carefully. The crook’s arrogance and ongoing impunity saw to that. – Chris Bateman

(Bloomberg) – Former public protector Thuli Madonsela says she should have taken a harder stance against President Jacob Zuma in her report on state capture.

The rand rallied to its strongest in 11 weeks after the High Court ordered the release of a report. It jumped as much as 2.2% to the strongest level since August 18 before paring its advance to 0.7% at 13.5103 per dollar by 19:00 in Johannesburg, strengthening the most among 31 major and emerging market currencies tracked by Bloomberg.

“The report confirms the variety of allegations leveled against our president in the last year or two,” Daniel Silke, director of the Political Futures Consultancy in Cape Town, said by phone. “It further erodes confidence in President Zuma, who is reeling already. Having this report in black and white from a source like the Public Protector is the final straw in the curtailment of the Zuma era before his term ends in 2019.”

Ajay Gupta, one of three Gupta brothers, offered Deputy Finance Minister Mcebisi Jonas R600m to take up the position of finance minister, Jonas said in his interview with Madonsela. Gupta said if he had a bag with him, he could get 600 000 in cash immediately, Jonas said. Jonas told Madonsela that Zuma’s son, Duduzane, invited him to a meeting in October last year and they then traveled together in Duduzane’s vehicle to the Gupta family residence, which Jonas had never visited before.

At the house, Gupta told Jonas he could be made finance minister and while the family has made a lot of money from the state, the Treasury was a stumbling block for their business ambitions and that Jonas would have to remove the Treasury’s director general Lungisa Fuzile and other members of the executive management. Jonas rejected the offer and later went public with a statement. He didn’t immediately respond to a call to his mobile phone seeking comment on Wednesday.

Phone records obtained by Madonsela show Molefe called Gupta 44 times between August 2 last year and March 22. Gupta phoned Molefe 14 times in the period. Molefe’s mobile-phone records also show that he was in the vicinity of the Guptas household 19 times in the three months to November last year.

After the #statecapture report, would you trust Brian Molefe & Eskom with the multi-billion dollar nuclear deals?

When contacted for comment, Molefe said he was studying Madonsela’s report and getting legal advice. A spokesperson for Oakbay Investments, the Guptas’ investment company, declined to comment, saying that the company is studying the report.

Cooperative Governance and Traditional Affairs Minister David van Rooyen was in Saxonwold on December 8, the day before Zuma roiled markets by appointing the then little-known lawmaker as finance minister, according to phone records obtained by Madonsela.

The records also show Van Rooyen frequently visited Saxonwold between October last year and January this year. In his interview with Madonsela, Gupta denied that Van Rooyen visits his house.

The report was completed just days before Madonsela’s seven-year term came to an end and she was replaced by Busisiwe Mkhwebane, who didn’t oppose the court bid to halt the report’s release. Zuma and the Guptas have denied wrongdoing.

Madonsela said she should have taken a harder stance against Zuma in her report, and accused the president of breaking his word by failing to answer her questions and failing to show up for planned meetings. Zuma is legally bound to abide by her directives, she said.

“I regret listening to lawyers who represented the broader legal community that I should tread softly with this report mainly to avoid a successful court review of the report,” she said by phone from Johannesburg.

In her report, Madonsela said she had decided to direct that a judicial commission be set up to probe Zuma’s relationship with the Guptas because her office hadn’t been given sufficient funds to complete the job.

Zuma’s office said earlier on Wednesday that he would study the report to see whether “it should be a subject of a court challenge”.

Mmusi Maimane, the leader of the main opposition Democratic Alliance, which originally asked the public protector to investigate his relationship with the Guptas, called on Zuma to resign.

“Given the scale of the state capture that is detailed in the report, which he has allowed and indeed fostered, he cannot continue in office,” he said in an e-mailed statement.