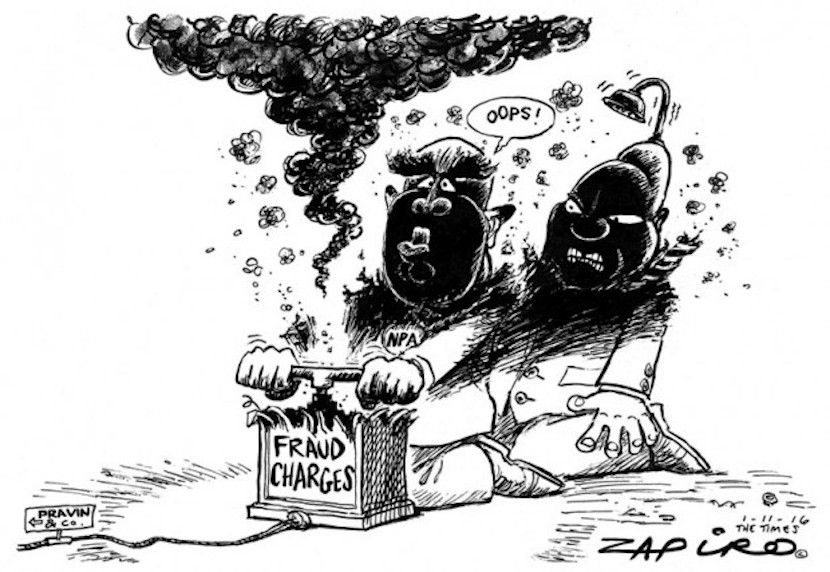 National Prosecuting Authority chief Shaun Abrahams comes across as a bumbling, boring civil servant, but behind his verbosity and pomposity lie malice and ulterior motives to do the work of corrupt political masters. This has been laid bare in a legal letter to President Jacob Zuma, with the Helen Suzman Foundation and Freedom under the Law NPC demanding that Abrahams is suspended – or they will take action to remove him from his post.The two non-governmental organisations, which campaign for the rule of law and the protection of the constitution, illustrate quite clearly in this letter how Abrahams played a dirty game in trying to build a spurious case against finance minister Pravin Gordhan. Although the charges against Gordhan were dropped in late October, this was not before reverberations from the matter were felt in the currency and equity markets. Above all, Abrahams and the prosecutors who worked with him on this project have severely undermined confidence in the integrity of the NPA. Quite simply, South Africa needs law-enforcement agencies that can be trusted to act impartially, morally and competently in investigating and pursuing bona fide crime cases. South Africa will not succeed in cleaning up corruption, fraud and other irregularities in government without an NPA head with integrity. However, with allegations of corruption and irregularity swirling around President Jacob Zuma and his allies, it is unlikely Zuma will easily give in to this demand. Most likely the Helen Suzman Foundation and Freedom under the Law NPC will have to head to court to get the response they are after – just as they did when they went to court to force Abrahams to drop charges against Gordhan. – Jackie Cameron

Letter to the President

3.1 the accused persons were charged with fraud, alternatively theft, in relation to the alleged payment by the South African Revenue Service (“SARS”) to the Government Employees’ Pension Fund (“the Fund”) of 81,141,178.11 on behalf of Mr Pillay (count 1 and the alternative to count 1 of the charge sheet);

3.2 Mr Pillay and Mr Magashula were charged with contravention of section 86 of the Public Finance Management Act, 1999 in that they failed to prevent SARS from incurring irregular, fruitless and wasteful and unauthorised expenditure (count 2 of the charge sheet);

3.3 Mr Pillay and Mr Magashula were charged with fraud, in that they represented to Human Resources of SARS that SARS was authorised to enter into an employment contract with Mr Pillay (count 3 of the charge sheet); and

3.4 the Minister and Mr Pillay were charged with fraud in relation to the re-hiring of Mr Pillay in or around April 2014 (count 4 of the charge sheet),

7.2 Mr Abrahams stridently defended and justified the charges at the 11 October press conference including stating that any suggestion that the charges are groundless and constitute political mischief is “as you will come to learn, that can be nothing further from the truth” (see paragraph 73 of the founding affidavit). This was not only a vehement assertion of the validity of the charges, but, in effect, a personal assurance by Mr Abrahams as the NDPP. He reiterated that the charges were solid and fully sustainable a day later, in response to a question from a journalist, mentioning that “the NPA do not take matters to court if they don’t believe there are reasonable prospects of a prosecution … I implore you to wait until the trial in respect of the matter, when the evidence is presented.” Mr Abrahams now clearly believes that no such delay is necessary. So much for the earlier exhortation;

7.3 Mr Abrahams has since, at the 31 October press conference, admitted that he had never applied his mind to the charges prior to 11 October 2016 and that he had seen no documents to support them — and that he did not seek to call for or interrogate any documents in support of them. Assuming that Mr Abrahams’ statement in this respect is true (which our clients do not concede), then, at best Mr Abrahams:

7.3.2 showed a spectacular dearth of conscientiousness; and

7.3.3 in asserting facts as unequivocally true while he was aware that he had no knowledge of those facts or the documents to support them, was plainly dishonest;

7.4 there was every indication in the 11 October press conference that the decision to prefer charges was that of the NPA, and the NDPP clearly lent the imprimatur of his office to the charges. Only Mr Abrahams spoke during that press conference. If Mr Abrahams’ version that he had nought to do with the charges, and did not know the facts or the evidence, is correct, then Mr Abrahams’ presentation and defence of the charges was misleading at best and potentially disingenuous;

7.5 the NDPP has the power, and in appropriate circumstances the duty, to review, supervise, control, correct or vary charges even before they are formally brought against any of the accused. The paradigm case where such a review should have been undertaken is the present matter, and before convening the 11 October press conference. The matter:

7.5.1 is of enormous public importance;

7.5.2 entails an investigation riddled with allegations of bad faith and ulterior purpose (by a broad range of stakeholders);

7.5.3 concerns a very high ranking member of the National Executive;

7.5.4 has national and international ramifications of the highest order; and

7.5.5 is not characterised by urgency and involves facts dating back to 2010, where there was no evidence of imminent irreparable harm in the future;

7.6 Mr Abrahams, however, consciously or recklessly ignored all of these signal features and proceeded to take a course of action, in the most public fashion, which he must have known would throw the South African economy into a tailspin;

7.7 had Mr Abrahams applied his mind to the facts and law pertaining to the charges, as any rational NDPP would have done before 11 October 2016, he would have realised that there was no basis, in law or in fact, for the charges and should not have persisted with them. His failure to do so, at best, shows a stupefying, disabling and disqualifying lack of competence; at worst, his failure betrays ulterior purpose and a lack of integrity;

7.8 the Priority Crimes Litigation Unit, which ostensibly investigated and preferred the charges, was not even legislatively mandated to deal with cases of fraud and theft and the charges are not within such Unit’s specific expertise. The fact that this Unit handled the case, instead for instance of the Specialised Commercial Crimes Unit which would ordinarily deal with charges such as these, is irregular and confounding; and

7.9 in fact, after the shortcomings of the charges, and the lack of evidence in support of those charges, were pointed out to him in our clients’ letter of 14 October 2016 (which is annexed to the founding papers), Mr Abrahams did not withdraw the charges as a conscientious NDPP of requisite integrity and objectivity would, but instead ordered further investigations after the fact (see the supplementary affidavit attached as “B”). These investigations were not competent and were, in any event, impermissibly aimed at finding new evidence which could sustain the then unsustainable charges. The NDPP’s review should have been based on the contents of the docket as it stood at the time the charges were laid. Instead, Mr Abrahams clearly recognised the fatal deficiencies of the charges and the investigations appear to have been embarked on so as to rescue the charges from inevitably being set aside. Ultimately, even those desperate attempts were futile, since the charges were ill-conceived and stillborn from the outset. At best, this shows Mr Abrahams fundamentally misunderstood the laws applicable to his powers as NDPP, which in itself demonstrates a wanton lack of conscientiousness; at worst, this shows Mr Abrahams intentionally and unlawfully sought to prop up insupportable charges after the fact so as to rescue them from review.