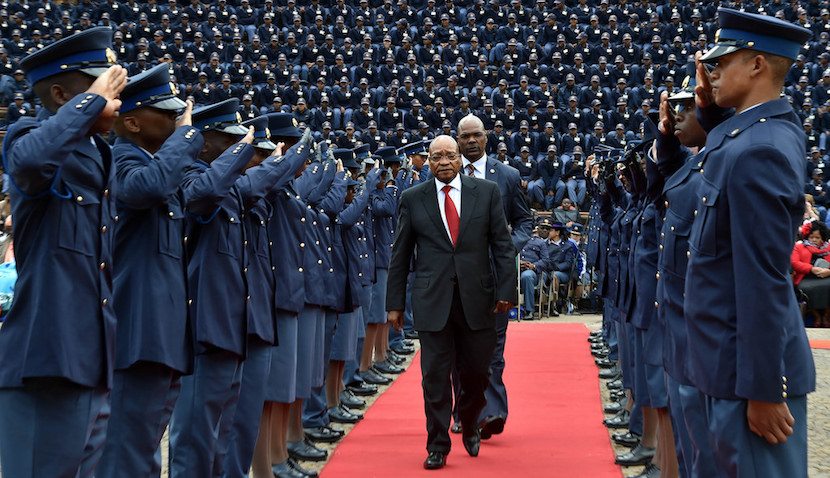 In another indication that South Africa’s criminal justice system is falling apart at the seams, it has emerged that the country’s fourth consecutive top cop is being investigated in connection with criminal activity. Taking a leaf out of President Jacob Zuma’s book, it seems that acting police commissioner General Khomotso Phahlane has been working on his own version of Nkandla. He is expected to explain why he has been interfering with witnesses in connection with an investigation into how he has been able to afford building a home worth abut R8m on a policeman’s salary. It took a private detective to get the ball rolling on this investigation, even though suspicions about the financing of this project were circulating in law enforcement circles. A docket of defeating the ends of justice was opened after independent forensic investigator Paul O’Sullivan laid a charge against Phahlane. O’Sullivan has been embroiled in an ugly battle with Phahlane and was arrested and held in custody after taunting Phahlane about the origins of the money used to build his Pretoria home. This scandal is another embarrassment to South Africa, which is appearing more and more like a country run by a gang of criminals. State security minister David Mahlobo is being investigated in connection with crimes after his name emerged recently in an Al Jazeera investigation into the rhino horn trafficking underworld. That was against the backdrop of sensational allegations of financial irregularity across several state entities, and with tentacles reaching into President Jacob Zuma’s circle, set out in a report released by the Public Protector’s office. Still, it’s good news that Phahlane is being investigated with a view to being prosecuted if there is any wrongdoing: after all, if you can’t trust the country’s top cop, which police officer can you trust? – Jackie Cameron

By Angelique Serrao and Pieter-Louis Myburgh

Johannesburg – Acting police commissioner General Khomotso Phahlane is expected to make a warning statement on Wednesday, in relation to a charge of defeating the ends of justice after being summoned by police watchdog IPID.

Following Jackie Selebi, Bheki Cele, and Riah Phiyega, Phahlane is the fourth consecutive top cop to be implicated in wrongdoing during their term of office.

News24 has reliably learnt that the charge relates to an Independent Police Investigative Directorate probe into an upmarket house Phahlane had built in the exclusive Sable Hills Waterfront Estate, north of Pretoria.

It is understood that IPID has been interviewing witnesses to gather information on how Phahlane, a career policeman, had managed to afford the construction of a residence said to be worth about R8 million.

The charge of defeating the ends of justice relates to Phahlane’s alleged contact with witnesses after he learnt that IPID was probing his property, say sources close to the investigation.

The IPID investigators are also probing alleged cash payments to a contractor totalling R700 000. The money was allegedly stuffed into plastic shopping bags and transported in the boot of a car.

It is understood that Phahlane will make the warning statement at IPID’s offices in Pretoria on Wednesday.

The position of ''commissioner of SAPS'' has seen it all. Jackie Selebi, Bheki Cele, Riah Phiyega and now Khomotso Phahlane.

The original docket against the acting police commissioner was opened by forensic investigator Paul O’Sullivan in January this year. O’Sullivan alleged that the bond Phahlane registered for the property is valued considerably lower than the value of the house, which Phahlane built in 2011 and 2012.

According to O’Sullivan, the massive townhouse covers 803 square metres of under-roof space. The cost of building the house is estimated to have been between R4.7m and R5.8m, said the forensic investigator.

“The bond would have yielded cash of about R1.58m. Phahlane would have to explain the source of funds of about R4.7m,” O’Sullivan said.

In March, O’Sullivan distributed an e-mail among a number senior police officers – including Phahlane – that included details about Phahlane’s property.

“Stop me if you can,” O’Sullivan had dared the officers before quizzing Phahlane on the origins of the money for his house.

If the allegations about #Khomotso Phahlane is true, he mst be excused from his position to allow investigation without interference.

“Phahlane, I wanted to ask you, where the money came from to build this mansion in Sable Hills Waterfront Estate? I’ve got a copy of the title deeds, and bond details. As I see it, you had spare cash of between R3m and R5m. Did you win the lottery?” O’Sullivan said in the e-mail.

Less than a month later, at the start of April, O’Sullivan was arrested by the Hawks at OR Tambo International Airport after he boarded a flight bound for London. He was charged with contravening Section 26B of the Citizenship Act. In the subsequent trial in the Kempton Park Magistrate’s Court, O’Sullivan’s lawyers mentioned the e-mail as a possible reason for his arrest.

News24 has also seen a copy of an SMS which had allegedly been sent to one of the IPID investigators and O’Sullivan, which contains threats against those involved in the probe.

“This is a warning to u. we r aware that u workin fo a big foreign spy paul salivan who is funded by his masters. . . u must stop now. we know where u stay and ur family. U must either choose to die with him,” reads the SMS.

Phahlane did not answer his phone or react to a text message from News24.

Brigadier Mashadi Selepe, Phahlane’s spokesperson, said the department respects the mandate of IPID to investigate any member of the South African Police Service irrespective of who they are.

“The Acting National Commissioner welcomes any investigation on any allegations and matter against him conducted within the confines of the law to enable the testing of any such allegations. It is unfortunate that such investigations and/ or allegations if any are conducted through the media with the sole aim of causing harm and damage to the reputation and integrity of the Acting National Commissioner,” Selepe said. – News24