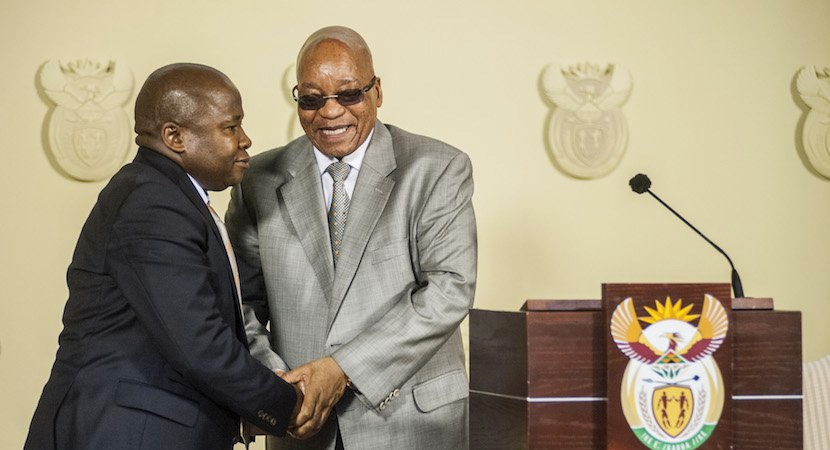 President Jacob Zuma did South African democracy a huge favour by so graphically exposing his leadership incompetence with his clumsy attempts to appoint a Gupta-favouring Finance Minister just over a year ago. Political analyst Daniel Silke says the minor economic earthquake this unleashed literally reshaped our political landscape for the better, forcing a suddenly threatened populace into action and creating a hitherto unprecedented vigilance around our leadership. Subsequent events have merely served to emphasise how ill-equipped the wily and street smart former guerrilla intelligence leader is to step up to the top job and perform anywhere near adequately on the world stage. This analysis below is a timely reprise of all that’s led up to the now wagon’s-drawn, batten-down-the hatches and try and ride it out response by the embattled ANC whose executive is at odds with itself. It bears remembering how we got here, so that when Zuma and his cronies eventually go, we can with a more united voice say, “never again”. Those are, quite ironically, the words Madiba used shortly after his release, to describe the evils of apartheid. – Chris Bateman

The magnitude of the last 12 months since ‘Nenegate’ rocked the nation cannot be underestimated.

Whilst Marikana some three years earlier had jolted the nation out of its post-Liberation innocence as police actions uncannily resembled that of the Apartheid years; Nenegate’s effect was ultimately to undermine faith in leadership – particularly in the office of the President.

The damage done to President Zuma was such that it simply has not been undone.

Nenegate had multiple effects. Clearly, it introduced into our political lexicon, the term ‘state capture’. Whilst the Guptas had loomed large for some time, their alleged involvement in a plan to take control of the key Ministry of Finance brought both the family and the term into popular conversation. It created an awareness hitherto on the backburner of conversation.

The heavy-handed way in which President Zuma exercised his authority in dismissing Nene sent markets and the Rand reeling. It was a jolt to the collective nation and its shock-waves of political interference, crony capitalism, rent-seeking and poor governance now were in sharp focus.

All these issues have remained firmly embedded in our political discourse and the recently ‘State of Capture’ report from the former Public Protector, Thuli Madonsela effectively (and controversially) documented much of the event and related issues. The report – is set to once again dominate domestic politics over the next number of months probably through protracted litigation.

Of course, President Jacob Zuma was no stranger to controversy – but the deleterious effects on the market and lack of confidence it ushered in took its toll on his Office. The flip-flopping on such a critical cabinet portfolio showed a weakness in leadership always suspected but now clearly visible. Forced to backtrack by those in his own party and the captains of South African industry, Zuma had been tainted. Just like Marikana, the stain of bad governance was now impossible to remove.

It was also an event that rocked many South Africans out of a slumber of distance from the politics of the day. So dramatic again was the market reaction, that many who had been lulled into a veneer or normalcy saw this event as a catalyst to begin caring.

And, even for those with no exposure or interest in the markets, the fiasco of a turnover of three cabinet ministers in the most important portfolio at a time when the economy was showing severe signs of strain was a joke and embarrassment far too much for many South Africans to handle.

Zuma was already on the ropes for some time on issues relating to Nkandla and the Spy Tapes Saga. This again exacerbated the negativity surrounding his office and opened the floodgates for the President to be belittled with new found bravery and vigour. Nenegate had turned many South Africans – particularly ANC supporters into sceptics.

The discontent with leadership began to gain momentum. As if Nenegate had unleashed a pent-up frustration public opinion began to turn. Clearly, the compound effect of a multitude of scandals – including Nenegate – resulted in the poorest ever showing for the ANC in the August 3rd elections and the significant loss of major Metros to the DA.

The tainting of the President aside, Nenegate may be regarded as a crisis point for the South African economy. Whilst the issues of capturing the Finance Ministry and Treasury was a possible blight to permanently damage the institutions, it was the consequences of Nenegate -the eventual stabilisation through Pravin Gordhan – that has been at the centre of South African economic life over the last year.

The Nenegate saga brought us Pravin Gordhan. And with it, a singular focus on preventing a ratings’ agency downgrade. It is entirely possibly that should Des Van Rooyen (and the Guptas) been able to hold onto their position over those fateful three days, Moody’s, Fitch and S&P might not have been as lenient as they have recently been.

Nenegate had been a crisis which could’ve precipitated an economic meltdown. Its unintended consequences have been an economy now in capable hands despite severe political, structural and policy difficulties that will keep the agencies at our collective throats.

And, through Gordhan’s more honest ‘warts-and-all’ approach to outlining the country’s challenges, South Africans have collectively been included in the fight to keep the ratings agencies at bay. Gordhan has managed to capture the confidence of the nation – a commendable consequence of the Nenegate’s disaster.

Politically, Nenegate also showed the limitations to the power of President Zuma. For any head–of-state to have his choice of Minister so soundly defeated by both those inside and out of the governing party, was a sign of a new era of presidential weakness. South Africans had never before witnessed such a backlash – and a retraction from as powerful a figure as the President.

Nenegate has clung to President Zuma. Bad decision-making, a misreading of the political and economic climate, a failure to understand the reaction from global markets and the bad smell of crony capitalism at work now dog his presidency.

Nenegate had an effect of almost made President Zuma politically impotent and together with the increased factionalism in the ANC all add to a sense of paralysis and inaction.

The point is that Nenegate was not an isolated event in the term of President Zuma. All the other scandals should be seen collectively as adding to his distress. But Nenegate was so directly linked to his persona that its damage was felt constantly as the year progressed. President Zuma never quite found his political ‘mojo’ after Nenegate. And the additional errors of judgement in governance reinforced what Nenegate had unleashed.

Ultimately, a President already under suspicion, confirmed the doubts through his Nenegate actions. And, it was patently obvious that many in his own party were highly embarrassed as a result. Zuma’s leadership had been questioned. He always had a chance to recover to some degree but never did.

Whilst Zuma was the big loser because of Nenegate, South Africa has become a country much more vigilant. Our democracy has matured to a point where the governing party is no longer guaranteed victory in successive elections. Scepticism for the most senior politicians in the land in now widespread. And, the lessons learned are now a virtual checklist used daily against the abuse of power.

Considering that Nenegate could’ve pushed us over the economic precipice, our use of it as a warning is heartening. In typical South African fashion, a crisis has become a beacon by which to guide us into the future.

The country knows too well that allowing its most senior politicians a second crack at another Nenegate will lead to disaster. And the precedence the people now have to protect the integrity of governance is invaluable.