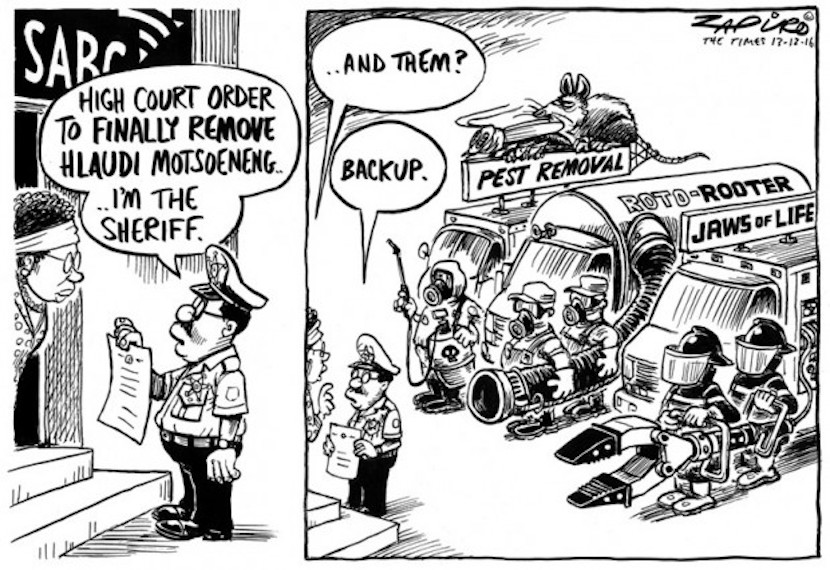 A war is being waged within the ANC’s armed wing after some cadres thought it appropriate to grant awards for services to “radical transformation” to individuals linked to financial irregularities and state capture. Understandably, not everyone within uMkhonto weSizwe thinks it is a great idea to honour people who have disgraced themselves by telling lies in public and plundering the state’s coffers. Set to receive a special award include:

One reason stipulated for granting these three awards is that they have apparently embraced favouring military veterans for state contracts. But whoever believes that the money will really end up in the hands of hard-working former MK soldiers is deluding themselves. The only significant beneficiaries of black economic empowerment appear to be individuals linked to Zuma and the Gupta families. Atul Gupta is probably the biggest beneficiary of BEE laws, rising on the back of state funds to become one of South Africa’s richest persons. However, Gupta is a recent arrival to South Africa; he is not previously disadvantaged and he doesn’t appear to have played a role in fighting against apartheid. Although Kebby Maphatsoe blindly waxes lyrical about Molefe and others, some in MK aren’t buying the spin. It will be interesting to see who wins this battle at the awards ceremony, scheduled for 15 December. With so much fake news around, it can be hard to separate fact from fiction. I had to pinch myself when the news that Molefe, Myeni, Motsoeneng and friends were set to be honoured crossed my desk. Apparently this MK battle is real, with the SABC reporting on the details. – Jackie Cameron

Molefe, Miyeni and Motsoeneng will get a “special award [for non-combatants] for immensely contributing to the radical transformation in this current phase”, Maphatsoe told reporters at a press conference on Tuesday.
Moyane will be honoured as a former “fully fledged” member of the ANC’s military wing alongside 30 other former members including veteran poet Mzwakhe Mbuli.

The awards ceremony on Thursday will be officiated by ANC President Jacob Zuma at the Emperors Palace Hotel in Johannesburg.

Maphatsoe said Molefe and Miyeni had introduced new procurement policies at their respective institutions that specify that a percentage of tenders should go to military veterans.

“We are encouraged and motivated that as military veterans at least for what we fought for, we are going to benefit in the economy of our country through procurement; that is the criteria that we used,” Maphatsoe said.

Maphatsoe also credited Molefe with transforming Transnet and Eskom and ending the load shedding that threatened to cripple the country’s economy.

“With the arrival of Brian Molefe [at Eskom] the system changed and up to now we don’t have load shedding,” he said before commending him for the state-owned enterprise’s procurement policy benefiting military veterans.

He said Miyeni was “fighting against white monopoly capital at SAA” where he says out of R40bn in SAA tenders R37bn goes to white-owned companies – some of them foreign.

“She is facing so much resistance at SAA from nowhere. It is resistance from white monopoly capital because things are changing at SAA and she has said she will give a percentage of procurement to military veterans,” Maphatsoe said.
“We as MKMVA we are not going to close our eyes and pretend nothing is happening,” Maphatsoe said.
Motsoeneng will get the special award for advancing women and his 90% local music policy at the public broadcaster.

However, Maphatsoe refused to be drawn into answering questions about controversies plaguing Motsoeneng, saying they started last year on deciding the names of those who will be honoured.

Dlamini-Zuma, Montana to be honoured

“Leave what is happening at SABC and take what is good that he has done. We need to recognise such people,” Maphatsoe said.

Motsoeneng has repeatedly been fingered during the parliamentary inquiry into the board’s fitness to hold office for having used SABC money to fund rival station ANN7, interfered in the newsroom and having fired those who disagreed with him at the public broadcaster.

Outgoing African Union Commission chairperson Nkosazana Dlamini-Zuma was also going to be honoured on Thursday night, but she will not be in the country because of African Union engagements and has asked that they defer the honour to next year.

Maphatsoe refused to comment on criticism that the MKMVA is recognising people seen to be close to Zuma.
“I don’t know that and I cannot respond to something I don’t know.”

Maphatsoe added that disgraced former Prasa boss Lucky Montana will be honoured next year for “improving the welfare of our comrades by hiring former military veterans including MK and PAC’s Apla.

“We’re not talking about something not happening. Next year we will include Lucky Montana for doing something to transform lives of our people,” Maphatsoe said. – News24