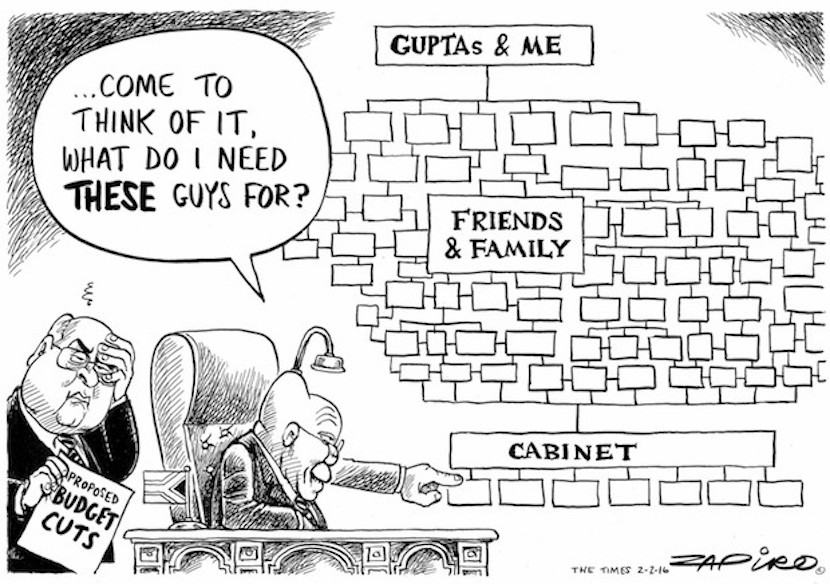 The firing of South Africa’s finance minister Pravin Gordhan puts the public purse firmly in President Jacob Zuma’s hands, a South African economics expert has warned. University of the Witwatersrand Head of School of Economic & Business Sciences Jannie Rossouw paints a very grim picture of what to expect following the shock overhaul of the South African cabinet this week. Many people were bracing for the removal of Gordhan, but few onlookers expected such a massive sweep out of the team leading the country. There is no mistaking the reason for the change: With allegations of corruption and state capture emerging daily for the past year, Zuma’s move is all about self-preservation and personal enrichment. South Africa is increasingly seen as a kleptocracy. For Rossouw, South Africa entered a new political chapter when Zuma switched not far off two-dozen people in his bloated cabinet. The future looks bleak. Rossouw predicts catastrophic outcomes for South Africa. That’s unless there are a sufficient number of people left within the upper echelons of the ANC and Parliament to stand firm against a president who is seemingly all-powerful in his quest to grab whatever he can for himself and his friends. For now, those people look like they are few and far between. – Jackie Cameron

In the biggest cabinet reshuffle in post-apartheid South Africa, Zuma replaced 10 ministers and 10 deputies. His decision to replace Gordhan with Malusi Gigaba, who is not known for mastery of the finance and economics portfolio, shocked the markets with the rand falling to a two-year low.

This will lead to substantially higher inflation and an increase in interest rates, with a negative impact on all South Africans. At the same time the country’s credit risk rating will be downgraded, with concomitant higher borrowing costs for the government.

The local currency’s fall was in response to widespread concerns that finance portfolio will become open to Zuma’s propensity to raid the public purse for personal gain. Both Gordhan and Jonas had reputations for being prudent and both were vociferous opponents of corruption.

The drama began to unfold earlier in the week when Zuma recalled Gordhan and Jonas from an investor roadshow in London but failed to provide any reasons for the decision. Markets reacted badly, and the country’s currency began its fall. Zuma reluctantly appointed Gordhan two years ago after the aborted appointment of Des van Rooyen as Finance Minister.

This is not a #CabinetReshuffle. It is a purge of those SACPers who stood up to a compromised Zuma. The target was always #PravinGordhan .

The only reason it took four days for Zuma to execute the decision was because of considerable opposition within the ruling African National Congress governing alliance. But Zuma rode rough shod over these concerns, ending days of speculation with a major overhaul of his cabinet and the removal of key ministers, some of who had become increasingly critical of the president.

The finance minister has been the focus of particular interest and concern because he controls national public expenditure – he holds the national purse. Gordhan instilled confidence in the role. South Africans, international investors and international credit rating agencies saw him as a “safe pair of hands”. This confidence extended to his deputy and the department they ran, the National Treasury.

The removal of the minister and his deputy therefore makes no logical sense. The inevitable conclusion is that Zuma was hellbent on replacing them with appointments that would allow looting of the national purse. Their replacement with Zuma acolytes places the national purse in his hands.

The firing of #PravinGordhan and #McebisiJonas is the real story here. Others are collateral damage. Story is looting of NationalTreasury.

Zuma can simply not be trusted with the national purse. Many examples can be cited, but we have to look no further than the Nkandla fiasco. It took an order of the Constitutional Court to call the president to order.

South Africa cannot afford to have the national purse in the hands of a president who has shown that he doesn’t understand the difference between his own and government assets.

It’s perhaps a bit much to ask President Zuma to care, as his conduct to date has clearly shown that he doesn’t care about the damage he does to the economy.

The Reserve Bank next?

With Gordhan and Jonas gone, are South Africa’s other public institutions safe?

The current Governor, Lesetja Kganyago, was appointed in 2014 and his appointment expires in November 2019. His remaining period of service therefore outlasts the president’s which will end after a general election, which is likely to be called earlier in 2019. The Reserve Bank will therefore be controlled by a safe pair of hands beyond the shelf life of the Zuma administration.

The escalating crisis facing South Africa raises a third important question: are there insufficient responsible people left in leadership positions in the ANC government to call Zuma to order when he holds the country to ransom?

It’s time for the reasonable voices in government to say that enough is enough, thus ensuring that the national purse remains in safe hands and is protected from looting. All South Africans deserve a better future than the one currently mapped out by their president.