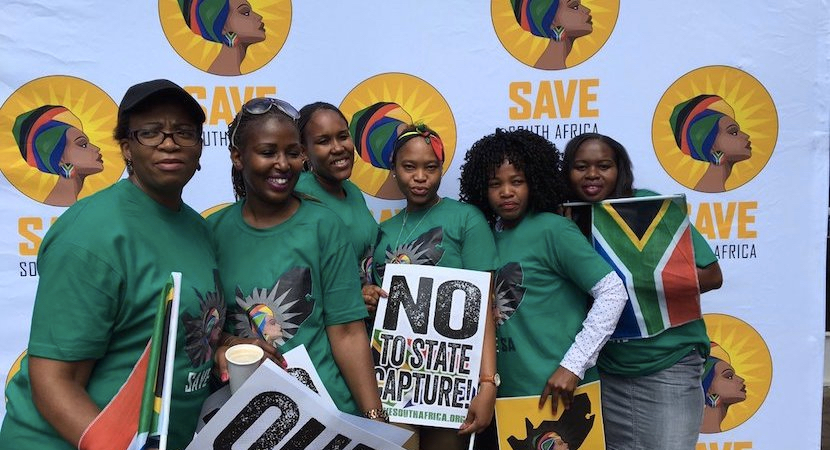 As the country’s largest employers’ association obviated all labour law complications by advising businesses to shut down and pay their anti-Zuptoid-protesting workers today, Pretoria and Cape Town led the way in preparations for promised mass urban protest action. In what seems set to closely reflect the Mass Democratic Movement (MDM), marches of the late 1980’s – only this time with the advantage of instant hi-tech communication – all the main access routes into Cape Towns’ CBD were due to be lined with human chains this morning. Here in Durbanville, beyond what was once a thick ‘boerewors curtain’ cell phones were abuzz with SMSes, tweets and WhatsApp messages, while the e-mails flew thick and fast. Lift clubs materialised out of thin air, the main topic of discussion seeming to be whether to join a local human chain and/or drive to Cape Town where the prospect of joining the Keizersgracht Street march on parliament excited most. Some of the more insulated, elderly (read 70-plus) and conservative were admonishing their children with, ‘is julle mal?” upon being told why they were being asked to baby-sit, memories of teargas, sjamboks and rubber bullets as sometimes violent MDM marches finally moved from the townships to the Cape Town CBD, their only frame of reference. Whether we’re headed back down that road, only time will tell, but the police and their Nyalas yesterday began cordoning off the Union buildings with razor wire… The cynics may rubbish this national outpouring of emotion against State Capture and looting, but never underestimate the effect of a witnessed, distilled expression of national anger, however symbolic. Out own very recent history is replete with examples of how protests can help build inexorable pressure. – Chris Bateman

The National Employers’ Association of South Africa (NEASA) has issued the following guidelines regarding the anticipated protest action on 7 April 2017.

There has been a lot of speculation doing the rounds as to the rights of employees to attend the planned protest action or alternatively where employees do not wish to report for duty due to safety reasons.

Since this protest action is not regulated by the Labour Relations Act the situation appears to be somewhat unclear.

The granting of leave always remain the sole prerogative of the employer. However, in considering whether or not leave should be granted for the purposes of this protest action, employers must be mindful not to establish a precedent by the granting of leave, especially since employees might expect to be granted a similar privilege should they wish to participate in similar future mass action.

In the absence of any arrangement to this effect with the employer, the unauthorised absence from work will trigger the ‘no work no pay’ principle and normal disciplinary procedures should apply.

In order to remove all risk from the above equation, employers might consider closing their businesses for the day. In this instance employees must be remunerated for the day.

This is what it looks like at church square right now.. hundreds gathered. #SaveSA #peoplesmarch pic.twitter.com/UteBNFshyu

Pretoria – It’s all systems go for the Save SA march to the Union Buildings on Friday to call for President Jacob Zuma to step down.

Save SA organiser Themba Masango said the preparations for the march were full steam ahead. “People have been sending us emails, SMSes and Facebook is abuzz. Telling us they are coming to the march on Friday morning.”

Masango and several others who are past of Save SA’s campaign were still making last minute preparations at Church Square in Pretoria where the march is set to begin.

Some of the people were singing and dancing to songs which were calling for Zuma’s resignation.
Masango said Save SA has beefed up its security with extra private security and police.

He said the march will have over 1 000 marshals and private security to keep the march peaceful.
Meanwhile, at the Union Buildings, police were seen making their own preparations.

Several police Nyalas loaded with barbed wire were seen at the gardens of the Union Buildings.