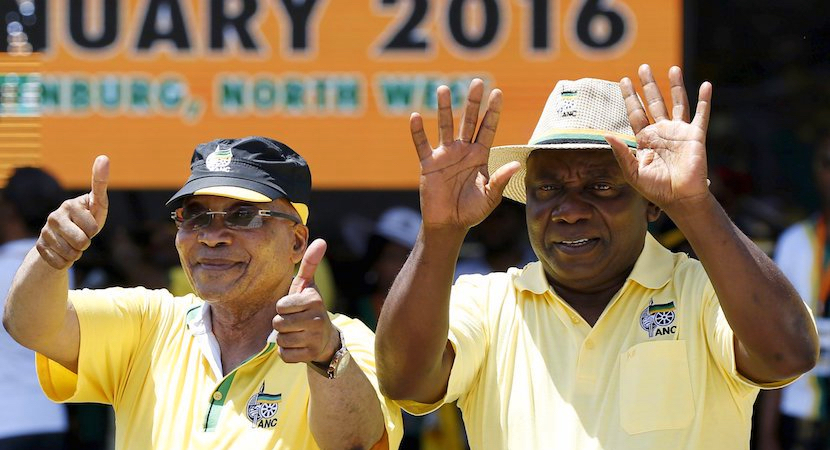 President Jacob Zuma has been a master tactician at controlling the ANC and building a patronage network to safeguard his power. But amid years of scandals, even several ANC members and partners are becoming fed up with Msholozi. The recent booing of Zuma at workers’ day celebrations also indicated somewhat of a turning point, where discontent with Zuma started to bubble to the surface. Subsequently, Ramaphosa has recently kick-started his campaign, seemingly timing it to pounce on Zuma’s missteps. The ANC’s leadership conference in December is still a long way off, but if Ramaphosa starts building a constituency, the race with Nkosazana Dlamini-Zuma could be closer than initially thought. – Gareth van Zyl

After months of playing coy about his aspirations to become the next leader of the ruling African National Congress, the deputy president has started crisscrossing the country speaking out against corruption.

He’s picked up endorsements from labour unions, church leaders and some of the ANC’s most respected leaders, including former president Kgalema Motlanthe and ex-finance minister Pravin Gordhan.

Ramaphosa’s biggest electoral asset may be his boss, the increasingly unpopular President Jacob Zuma, who’s indicated that he wants to be succeeded by Nkosazana Dlamini-Zuma, his ex-wife and former head of the African Union Commission. While Dlamini-Zuma, 68, initially appeared to be the front-runner in the race, the balance of power seemed to have shifted on May 1 when persistent booing forced Zuma to cancel an address at a union rally in the central Free State province, one of his traditional strongholds.

“People are fed up, they are quite unhappy with the Zuma leadership and the idea that Nkosazana might be his proxy,” said  Mcebisi Ndletyana, an associate professor of political science at the University of Johannesburg.

“Ramaphosa is benefiting from that disillusionment.”

Under Zuma’s leadership, Africa’s most-industrialised economy has stagnated and the unemployment rate has reached a 13-year high.

Opposition to Zuma’s rule has been fuelled by a series of scandals, including a finding by South Africa’s top court that he violated his oath of office when he ignored a graft ombudsman’s directive to repay taxpayer funds spent on his private home.

The electorate’s disgruntlement became evident in municipal elections in August last year. The ANC’s share of the vote fell to 54.5 percent, the lowest since the end of apartheid, and the party lost control of the capital, Pretoria, and Johannesburg, the economic hub.

Several ANC leaders have warned the party may lose its majority in national elections in 2019 – a risk that Susan Booysen, a politics professor at the University of Witwatersrand’s School of Governance, sees as boosting Ramaphosa’s campaign.

“The tide is turning against Jacob Zuma,” Booysen said. “Things are falling apart for the Zuma camp.”

Calls for Zuma to go reached a climax after he fired Gordhan on March 31, raising concerns over the government’s commitment to fiscal discipline and prompting S&P Global Ratings and Fitch Ratings to downgrade the nation’s credit rating to junk. The rand slumped.

While Zuma said his relationship with Gordhan, who had frustrated his plans to build new nuclear power plants, had broken down, Ramaphosa criticized his removal and said other senior ANC leaders weren’t consulted.

It still could be an uphill climb for Ramaphosa to win the ANC’s top post when the 105-year-old party holds a December conference to elect its leader, who will also be its presidential candidate in the 2019 vote.

With only two of the nine provinces, Gauteng and Eastern Cape, firmly behind him, Ramaphosa lacks enough support within the ANC to win control of the party, Darias Jonker, an analyst at Eurasia Group in London, said in a May 5 note to clients.

Yet, the fact that Ramaphosa showed he was prepared to stand up to Zuma over Gordhan’s dismissal has boosted his stature, said Anthony Butler, a political science professor at the University of Cape Town and author of a biography about Ramaphosa.

A lawyer who co-founded the National Union of Mineworkers, Ramaphosa, 64, helped negotiate a peaceful end to apartheid and draft South Africa’s first democratic constitution. He lost out to Thabo Mbeki in the contest to succeed Nelson Mandela as president in 1999 and went into business, amassing a fortune before returning to full-time politics in 2012 as the ANC’s deputy leader.

His image was tarnished when police shot dead 34 protesters at Lonmin’s Marikana platinum mine in 2012, following days of violent strike action. In an e-mail written days before the shooting, Ramaphosa described the violence at the mine, which was part-owned by a company he founded, as “dastardly criminal” and urged police to take “concomitant action.” A commission of inquiry cleared Ramaphosa of wrongdoing.

In an address to students in the southern town of Grahamstown on Sunday, Ramaphosa said his language in the email was inappropriate and that he’d sought to prevent violence rather than provoke it, News24 reported.

Ramaphosa needs to continue riding the wave of popular disapproval of Zuma’s leadership, according to Ndletyana.

“Yearning for an alternative leadership is likely to grow,” Ndletyana said. “Zuma is not done yet with his scandals. He is a gift that keeps on giving.”