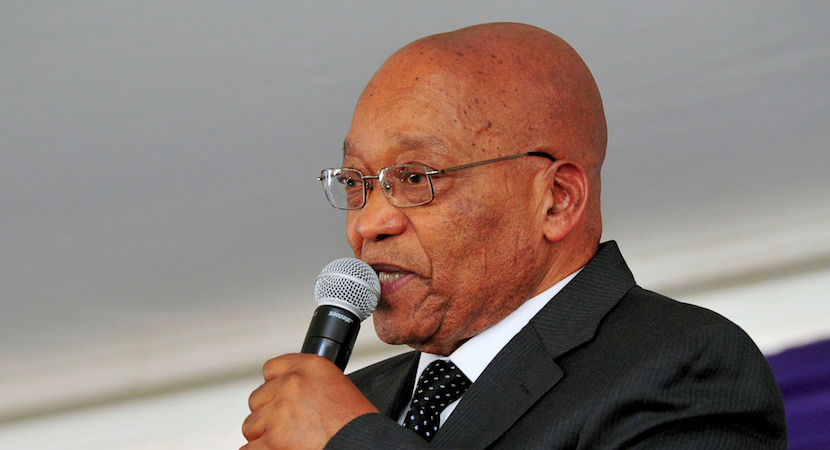 Drama was always going to engulf the weekend’s ANC NEC meeting in Centurion, Tshwane. President Jacob Zuma is still fighting for his political life after another motion of no-confidence was tabled by some members of the ANC at this meeting, according to reports. As this was happening on Saturday night, details of a series of leaked emails started to appear online, outlining proof of how the Guptas control government ministers, host them in lavish hotels in Dubai and exercise blatant control over government decisions. In turn, the emails also reveal how Zuma wrote to UAE leaders, asking them to provide him patronage as he seeks a second home in the Gulf country. The Guptas are linked to one of the most expensive homes in the UAE, a property in the plush Emirates Hills. Late on Sunday night, it was still unclear if Zuma would come out unscathed. But the details of the emails could be South Africa’s version of Watergate, and the future of the once proud ANC looks bleaker as each day passes. Some of the emails, which the Sunday Times has published online, are viewable below. You can view the all the emails that the Sunday Times has published on this link. Media24’s City Press newspaper also published a story about the emails on Sunday. – Gareth van Zyl

Cape Town – A cache of damning e-mails between members of the Gupta family, some of their trusted lieutenants and President Jacob Zuma’s son, Duduzane, has brought forward fresh details on the mechanics of the Guptas’ dubious state capture strategies.

City Press, News24’s sister publication, on Sunday revealed astonishing details on the dealings between the Guptas, their companies and some of South Africa’s most senior government officials.

These new revelations were contained in hundreds of e-mails that were leaked to the newspaper.

One of the e-mails in the large cache of documents is an e-mail from Gupta associate Ashu Chawla to Duduzane Zuma, sent in January 2016. The e-mail contains two letters apparently drafted by President Jacob Zuma, in which he seeks the blessing of both the crown prince of Abu Dhabi and the prime minister of the United Arab Emirates (UAE) for his family to make the UAE their “second home.”

Another e-mail sent by Chawla, this time to the luxurious Oberoi Hotel in Dubai, details how Chawla apparently organised for the rental of a BMW 7 series to be paid for on behalf of mining minister Mosebenzi Zwane.

The timing of the e-mail, which was sent in December 2015, is crucial, seeing as the Guptas were at that juncture in the midst of tense negotiations to purchase the Optimum coal mine from international mining giant Glencore. Zwane, who according to some of the other leaked e-mails also travelled in the Guptas’ private jet at the time, has been accused of playing a key role in forcing Glencore’s hand in the sale of the coal mine.

Chawla also sent an e-mail to the same hotel in January 2016 in which payment for a luxury suite for the now suspended senior Eskom executive Matshela Koko is discussed.

“Sahara will pay the entire bill please do not ask any credit card guarantee from the guest at the time of check in,” Chawla wrote the hotel in relation to Koko’s stay.

The former acting Eskom CEO, in his earlier role as the parastatal’s group executive for power generation, last year signed an Eskom document in which the state-owned power utility approved a prepayment of nearly R600 million to the Guptas’ coal mining venture Tegeta Exploration and Resources. Koko was later infamously caught on camera lying about the prepayment on current affairs television television show Carte Blanche.

The fourth e-mail News24 is publishing today is an e-mail from an employee of Bell Pottinger, a controversial UK-based public relations firm that the Guptas had roped in earlier to help them deal with the tsunami of state capture allegations against them that started to surface in March 2016.

The e-mail was written by one Philip Peck right after former deputy finance minister Mcebisi Jonas went public about a massive bribe the Guptas allegedly offered him if he chose to do their bidding at Treasury.

Peck’s e-mail appears to be an attempt by Bell Pottinger to plant a story in which it was alleged that Jonas himself had been guilty of receiving bribes.

It is not clear whether the apparent plan was ever put in motion.

JZ Letter to Crown Prince by SundayTimesZA on Scribd

(Bloomberg) – Jacob Zuma is fighting to remain South Africa’s president as the top leadership of the ruling African National Congress resumed its debate of a proposal to recommend his removal from office.

The debate started Saturday in the capital, Pretoria, according to five members of the party’s national executive committee who asked not to be identified because they aren’t authorised to speak publicly on the matter. The proposal came after weeks of mounting pressure on Zuma following his March 31 decision to remove Pravin Gordhan as finance minister in a cabinet purge. That move swelled the ranks of his opponents and prompted S&P Global Ratings and Fitch Ratings Ltd. to downgrade the nation’s sovereign credit rating to junk.

Forty-five members of the NEC opposed Zuma, 41 backed him and the allegiances of the remaining 20 were unclear, the Sunday Times reported, without saying where it got the information. The three-day meeting started on Friday.

Divisions in the party have widened since the ANC suffered its worst-ever electoral result when it lost control of Johannesburg, the economic hub, Pretoria, the capital, in a municipal vote in August. Three of its top six officials criticized Zuma’s decision to fire Gordhan, while Deputy President Cyril Ramaphosa, who’s a rival to Zuma’s ex-wife to succeed him as party leader in December, said on May 21 that South Africa is threatened with becoming a “mafia state.”

While only parliament can legally force the president from office, the NEC could instruct Zuma, 75, to resign, as it did Thabo Mbeki in 2008, or tell its lawmakers who occupy 62 percent of the seats in the national legislature, to remove him. Zuma has said he’ll quit if the party orders him to.

Zuma is due to step down as party leader in December and as president in 2019. Calls for his ouster have mounted since the nation’s top court ruled in March last year that he “failed to uphold, defend and respect the constitution” because he didn’t abide by a directive from the graft ombudsman to repay some of the R215.9m ($16.8 million) spent on a swimming pool, animal enclosures and other upgrades to his private home.

A study by eight leading academics from four of the nation’s top universities released last week found that Zuma and his allies, including members of the Gupta family who are in business with his son, had carried out “a silent coup” that had enabled them to raid state assets and reap billions of rand from government contracts. Zuma and the Guptas have previously denied such allegations.