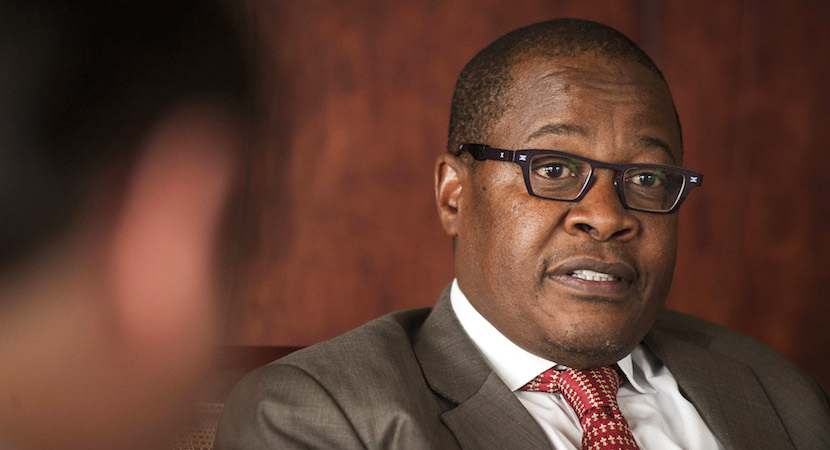 CAPE TOWN — Professor of Politics at University of Johannesburg, Steven Friedman, says we should look at the pattern of the patronage web and not get lost in chasing the spiders that populate it. In an ultimately encouraging analysis, he plucks off the legs and analyses Zuptoid mini-spider, former Eskom CEO Brian Molefe, to illustrate how the ruling Zuptoid cadre has been forced to scramble as their web starts to unravel. Just when you thought the Zuptoid arachnids were feeding at will, with each state institution and/or entity tangled and tightly woven into an impenetrable cocoon, this reality check, based on recent events, offers hope. The travails of Cryin’ Brian, the Sobbing Sage of the Saxonwold Shebeen (with apologies to Ed Herbst), epitomise the slowing down of the Zuptoid juggernaut in its bid to leverage and increase its State Capture as the anchor threads of the snare begin to fray. – Chris Bateman

By Steven Friedman for The Conversation*

It is probably no consolation to Brian Molefe, the CEO of South Africa’s power utility Eskom, that his woes are evidence that President Jacob Zuma’s March cabinet reshuffle has so far had precisely the opposite effect to that which was expected.

Nor, no doubt, would it cheer Molefe to know that his plight has become a symbol of an important reality: that who occupies which political post is turning out to be far less important to the government’s economic decision-making than it seemed.

Molefe’s woes are evidence that the country’s infamous cabinet reshuffle has so far had precisely the opposite effect to that which was generally expected.

Before the reshuffle, many expected that, if Zuma did fire the finance minister and deputy minister, the balance of power in government would sharply change. Walls which held the state’s capture at bay would come tumbling down.

But this has not happened. The ANC patronage faction may have strengthened its presence in the Cabinet. But its attempt to take control of key institutions is in retreat in the face of opposition within the governing party and from unions, business and civil society groups.

It is widely known that the Treasury is a key prize for the ANC’s patronage faction. It was also expected across the spectrum that if Pravin Gordhan and Mcebisi Jonas were out of the way, it would be able to get on with handing over public resources to private interests without hindrance. Molefe’s recent experiences shows that this has not happened.

After leaving Eskom in response to the Public Protector’s State of Capture report which linked him to the Gupta family, Molefe landed in Parliament chosen by North West province, a patronage faction stronghold.

When Zuma told ANC leaders he planned to replace Gordhan, it became clear that Molefe had not been given his seat as a consolation prize – the president wanted to appoint him finance minister. He backed off because half the ANC’s top six leaders insisted that Molefe was unacceptable because he had become firmly linked to the patronage faction.

This seems to have made Molefe so politically radioactive that he was not given any post in the reshuffle. Since he presumably had not come to parliament to sit on committees, he was given his Eskom job back.

This prompted a backlash – from within the ANC as well as outside it. The governing party issued a statement rejecting the appointment and the ANC national executive committee, its decision-making body between conferences, agreed that Molefe should go.

He now relies on courts to give him back his job – the same courts which have barred him temporarily from Eskom property, suggesting that they may see less merit in his case than he hopes.

What is the political import of these events? Not only have the president and the patronage faction been unable to secure Molefe any job in the Cabinet which would enable him to take the economic decisions they want. They have also failed to persuade an ANC national executive committee that Molefe should keep his Eskom job. That hardly suggests an all-conquering patronage faction ready to do with the state whatever it pleases.

Molefe’s fate is not an isolated incident. Since the reshuffle, every key government decision has gone against the patronage faction. The president has finally, after months of stonewalling, signed the Amendments to the Financial Intelligence Centre Act. The amendments aim to tighten control on illicit financial activity and were opposed by the patronage faction.

The interim board of the South African Broadcasting Corporation has begun an attempt to retrieve it from the faction. A deal between the armaments parastatal Denel and a company with links to the Gupta family, VR Laser Asia, has been halted.

Berning Ntlemeza, head of the Hawks, the special investigating unit which hounded Gordhan and Jonas and was seen as a loyal instrument of the patronage group, has been removed by new Police Minister Fikile Mbalula.

Investigations have been ordered into Eskom transactions.

There is a clear pattern here and it sends the opposite message to the one expected before the reshuffle. It is consistent with a takeover by the patronage faction’s opponents, not the faction itself.

How do we explain this? Why, after Zuma, a key figure in the patronage faction, removed key impediments to it at the National Treasury and other ministries, and saw off attempts to remove him, is the ANC and government behaving as if the patronage group lost?

It’s about much more than just personalities

The short answer is that the framework through which many in business, the media and the academy look at the ANC’s economic battle places far too much stress on personalities. It assumes that, if Zuma stays, the patronage group is rampant – if he goes, they will be put to flight.

It was similarly assumed that Gordhan and Jonas were the thin line which kept the patronage faction at bay: once they were gone, it could trample over the fiscus like an invading army.

But the battle is about far more than personalities. It is about how important sections of the ANC and the society relate to the market economy. Within the ANC there are significant groups who see patronage as a mortal threat to the economy. They enjoy substantial support from anyone who has a stake in the formal economy: unions and their members as well as professionals and business people.

They did not disappear on the night of the reshuffle. On the contrary, they regrouped quickly. They seem to have decided that they could win important battles on what government should and should not do about the economy regardless of who is president and in the Cabinet. And they seem to be winning thus far.

While the mainstream debate concentrates on who occupies which positions, the patronage group’s opponents are showing that it is possible to limit the use of public funds for private purposes regardless of who wins the personality battles.

It is, of course, not yet clear how lasting the patronage group’s retreat is – it may well recover. What is clear is that, even if its opponents win the ANC presidency, this faction will not disappear: it may continue to control several provincial governments which can be used as patronage strongholds. So its success, too, depends less on who gets what position.

Molefe’s recent travails, and the events which surround it, show that the battle for the fiscus will continue. And that the economy will be shaped by who wins the battle on concrete decisions more than who sits in government offices.