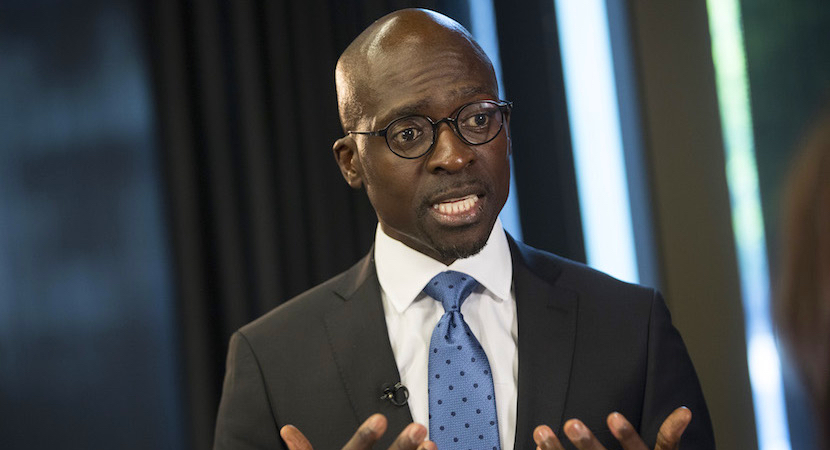 EDINBURGH — There are some signs of rifts developing between President Jacob Zuma and his clique, on the one hand, and others who are tiring of the state capture narrative that is hammering the economy and creating social tension. This is evident amid the sea of protest swirling around the Public Protector, Busisiwe Mkhwebane, over her recommendation to change the Constitution to allow for more political control over the central bank. The ANC has slammed Mkhwebane’s proposal. Even Minister Malusi Gigaba, who is evidently ‘caught’ and ‘captured’ by Zuma, the Guptas and friends, has publicly distanced himself from the recommendation that would cater for altering the SA Reserve Bank mandate. Nevertheless, Gigaba failed to salvage his reputation as an economic imbecile. His appearance on Bloomberg TV is being described in some circles as a “car crash” interview – and among the reasons the rand has taken a knock. – Jackie Cameron

Bloomberg – South Africa should protect the independence of the Reserve Bank and must evaluate what effect the recommendations of the graft ombudsman to alter its mandate will have on the institution, Finance Minister Malusi Gigaba said.

Public Protector Busisiwe Mkhwebane’s suggestions to alter the role of the central bank to focus less on inflation and more on societal needs has raised fears about eroding the independence of the institution, with the African National Congress and business groups accusing her of overstepping her powers.

The ruling African National Congress said the recommendations are unlawful. The Public Protector’s suggestions were part of report following an investigation into a Reserve Bank bailout for Bankorp, a unit of Barclays Africa, almost three decades ago.

“To change the constitution would not be unlawful, but the manner in which the recommendation is being made would be unlawful,” Gigaba said. The context and purpose of the proposed “amendment is not quite clear to me given the issues that were being investigated.”

Gigaba said he still needs to study the recommendations before deciding whether he will support the central bank’s fight against the move.

Mkhwebane recommended in a report on Monday that parliament start a process to change the constitution to make the central bank focus on the “socioeconomic well-being of the citizens” rather than protecting the value of the currency to contain inflation.

The Reserve Bank has said it plans to approach the nation’s courts to review Mkhwebane’s directive and set it aside as it falls outside her powers.

The #PublicProtector shall henceforth be known as the #GuptaProtector. That is all.

Bloomberg – South Africa’s ruling party accused the nation’s graft ombudsman of overstepping her powers after she called on parliament to amend the constitution to change the mandate of the central bank.

Public Protector Busisiwe Mkhwebane recommended in a report on Monday that parliament start a process to change the constitution to make the central bank focus on the “socioeconomic well-being of the citizens” rather than protecting the value of the currency to contain inflation. Her comments knocked the rand as the change was seen by investors as a threat to the independence of the Reserve Bank.

“We find that quite unlawful of the Public Protector, that you can make such a recommendation for an amendment of the constitution,” Zizi Kodwa, a spokesman for the African National Congress, said in an interview with Johannesburg-based broadcaster eNCA on Tuesday.

The bank has said it plans to approach the nation’s courts to review Mkhwebane’s directive and set it aside. The argument that protecting the buying power of the rand is “anti-development” is misplaced, Governor Lesetja Kganyago said in a speech on Monday.

ANC Deputy Secretary-General Jessie Duarte said the party will discuss the regulator’s mandate at its policy conference later this month and the central bank must be left independent to avoid to mismanagement.

“Once a Reserve Bank is managed incorrectly so and not through specific fiscal disciplinary mechanisms and legislation, a Reserve Bank can be a tool of destruction,” Duarte said in an interview with News24.

By Gordon Bell and Amogelang Mbatha

Bloomberg — South Africa’s central bank accused the graft ombudsman of overreaching her powers and promised to fight a proposal to change the institution’s primary objective of protecting the value of the currency.

“The Reserve Bank has consulted its legal team and has been advised that the remedial action prescribed by the Public Protector falls outside her powers and is unlawful,” the Pretoria-based central bank said in a statement on its website.

Public Protector Busisiwe Mkhwebane recommended in a report on Monday that parliament start a process to change the nation’s constitution to make the central bank focus on the “socioeconomic well-being of the citizens” rather than inflation. Her comments knocked the rand as the change was seen by investors as a threat to the independence of the Reserve Bank.

#PublicProtector Mantashe: The Reserve Bank is doing its work. If we lose that credibility we will battle economically.

The central bank’s independence is cited as a key institutional strength by credit-rating companies and investors. Altering the mandate may add to policy uncertainty after a cabinet reshuffle in March and changes to other regulations, including the Mining Charter. The central bank takes economic growth and employment factors into account in targeting inflation at 3 percent to 6 percent.

Mkhwebane’s suggestions were part of recommendations following an investigation into a Reserve Bank bailout for Bankorp, a unit of Barclays Africa, almost three decades ago. The rand weakened 1.5 percent against the dollar on Monday, while the yield on the benchmark rand bond due in 2026 climbed 6 basis points to 8.54 percent.

The report comes at a time when the ruling African National Congress is preparing for a leadership battle and as President Jacob Zuma has vowed “radical economic transformation” to accelerate spreading wealth to the black majority in the country. He has also called for the constitution to be changed to allow for land to be taken without payment. The ANC will debate policy direction at a conference starting June 30.

Mkhwebane also proposes that the constitution requires “regular consultation between the bank and parliament to achieve meaningful socioeconomic transformation.” The law currently states the central bank must consult with the finance minister. She told Talk Radio 702 on Tuesday that the current central bank mandate served only “few commercial interests” and that her role is to ensure “social justice.” It’s within her powers to recommend that parliament changes the central bank’s mandate, Mkhwebane said.

“The public protector can’t order parliament to change legislation, including the constitution,” Pierre de Vos, a law professor at the University of Cape Town, said by phone. Any decision to change the central bank’s mandate would “depend on the politicians,” he said.

A two-thirds majority of lawmakers is needed to change the constitution.

The National Treasury has noted the report and isn’t in a position to comment yet as it hasn’t received it from the Public Protector’s office, it said in a text message on Tuesday.

The argument that protecting the buying power of the rand is “anti-development” is misplaced, according to Reserve Bank Governor Lesetja Kganyago.

“Keeping inflation low, protecting the value of the currency, is supportive of growth,” he said in a speech late Monday in Johannesburg.