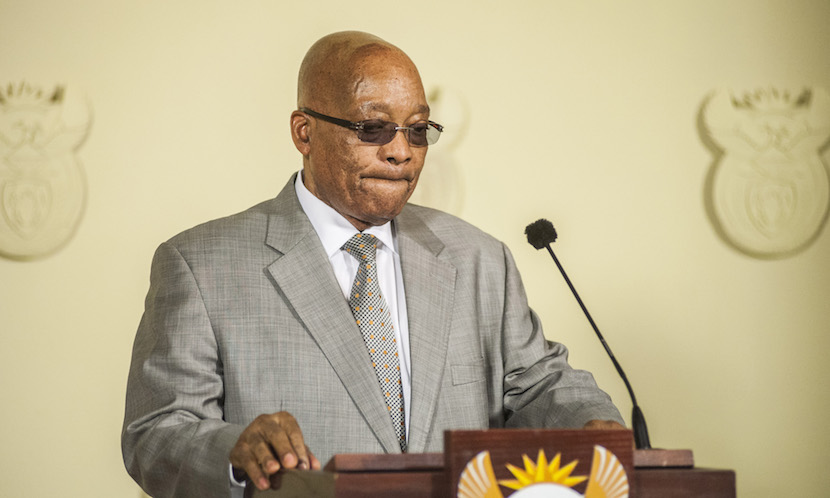 CAPE TOWN — I once watched a bleeding, bare-chested Zulu taxi driver, surrounded by scores of bloodthirsty rock-throwing and kerrie-wielding opposition taxi organisation drivers, wade into the crowd and thump a single rock-throwing opponent with his kerrie. Nobody dared stop him. He died of course, finally overwhelmed by the crowd. These disturbing images come to mind as I read Wits School of Governance Professor Susan Booysen’s analysis of this weekend’s ANC policy conference. President Jacob Zuma seems willing to take the ANC down with him, letting it split to retain power until his term finally ends. That nobody inside the Zuptoid circle dares throw the first rock when he’s ailing and at his most dangerous, is quite clear. Zuma’s fellow policy-drivers have yet to turn on him. He has the State’s full might at his disposal, enough to keep them onside (that, and greed). However, his fierce determination to battle the non-Zuptoids to the bitter end, could split the wider organisation apart and lead to its demise. Booysen points out that this weekend’s policy conference agenda fails to address the Presidency’s powers and lack of accountability, or that of the executive. It is, after all, about policy… – Chris Bateman

By Susan Booysen for The Conversation*

South Africa’s governing African National Congress (ANC) enters its 2017 policy conference riven and weakened. The five-yearly national event is the precursor to the national elective conference where its policy proposals will be adopted formally.

The party is operating under the weight of concurrent crises. It acknowledges these fleetingly, vaguely and indirectly in nine policy discussion documents that have been prepared for the conference, giving little indication of the unprecedented organisational mess it is in.

The full drama of the party’s capture, collapse or continuation will play out in debates at the conference. But it remains unclear whether or not the various factions will be able to find solutions and compromises that define the party 23 years after it came to power. It is also unclear whether the party can differentiate between the need for far-reaching change or whether it will simply stick to slogans like “radical economic transformation”.

The elephant in the room is whether economic transformation is a policy essential or simply a lifebuoy to protect the party’s embattled president, Jacob Zuma, and his faction. The truth is that the ANC doesn’t have much time to find answers to its organisational battles before its December conference when a new leader will be elected.

The main, interrelated crises that the ANC policy discussion documents relate, in some way or another, are the:

There are some early indications as to how the ANC will emerge from this cauldron. Will it be muddling through, veiled in compromises, or can a “new” ANC emerge?

Dissecting a few aspects of the crises in the context of the policy conference sheds some light.

The ANC is at its weakest point ever. Factional fallout is pushing the party to the verge of implosion. The two major factions are allied to President Jacob Zuma and Nkosazana Dlamini-Zuma in the one camp, and Deputy President Cyril Ramaphosa in the other.

Rightly or wrongly they have become identified with diverging ideological-policy voices. Zuma’s camp is supposed to be more radical, while Cyril’s is viewed, in the phraseology of the Zuma camp, as being more sympathetic to “white monopoly capital”. Ramaphosa’s game comes across as more erudite, playing on policy stability and inclusive growth.

Reading the policy documents raises the question of whether formulations can be found to bridge the factional divides, or whether the losers will simply choose to break away from the party.

This wouldn’t be the first split from the ANC. The first resulted in the breakaway Congress of the People after the ANC’s 2007 conference. Another followed after the 2012 conference and culminated in the formation of the Economic Freedom Fighters.

The difference this time is that there’s no clear centre of power that would remain to carry forward the remaining faction.

A spin-off party – at this stage an anti-Zuma ANC looks most likely – could link up with the growing political opposition to defeat the Zuma ANC in the 2019 elections. This would take the cost of another split far beyond anything the ANC had seen before. Hence, the latest thrust for organisational unity.

But even if it could achieve unity, there would still be the issue of how this was translated into policy consensus. Or the tricky issue of what to do about Zuma, state capture, abuse of state corporations and organs for private-factional gain.

The possibility that the ANC could lose power in 2019 runs like a tragic thread through the documents on Strategy and Tactics, and Legislatures and Governance. The ANC acknowledges that its actions have repelled many of its previous supporters. It argues nevertheless that it has retained its liberation movement reputation, that voters believe it has performed, and can be trusted more than other parties.

Possible future electoral losses are noted. The party says it must “prepare itself for the complicated relationships involved in coalition government”.

But the documents concede only superficially that corruption, especially at top, has tarnished the ANC’s credibility.

Zuma tells the #ANCNPC that the ANC has helped create a state with three arms. I assume he's referring to Atul, Ajay and Rajesh.

The crisis of the ANC’s fusion into state power leaps from the pages that deal with the public institutional landscape and the ANC’s proposals on how to address institutions gone wrong. But the documents simply regurgitate what’s gone before. There is no explicit mention of the problems of the presidency’s powers, or the deep problems of an unprofessional executive that is largely beyond accountability. These are alluded to in vague and abstract terms and are so carefully stated that they might as well be off the radar.

Zuma’s closeness to the Guptas, his friends who are the the centre of state capture claims, is inseparable from these elusive statements.

Is Zuma trying to engineer a collapse of the ANC?

So what happens next? One possibility is that Zuma is preparing simply to collapse the ANC, driving it into the ground on the premise that there can be no ANC without him. This scenario was put to me by an ANC functionary from a so-called “Premier League” – a pro-Zuma faction of leaders of four provinces.

It is perfectly feasible that the outgoing president could tear the ANC apart by letting it split while retaining power, for now, over a faction that cannot win elections and will not find credible coalition partners.