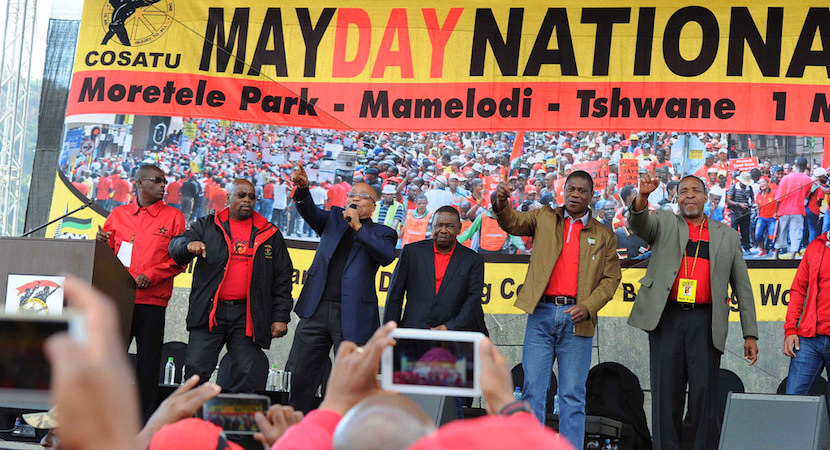 CAPE TOWN — Voters urgently need reminding that Cosatu, the SACP and the EFF were enthusiastic Zuma supporters and the very architects of the corrupt governance debacle that has pushed South Africa back to its former global pariah status. None of this trio deserves forgiveness, nor the benefit of any societal amnesia as they belatedly turn on Zuma. So argues James Hamill, a lecturer in politics and international relations at the University of Leicester. His analysis is an eloquent and powerful illustration of the most cynical view of politics. Hamill cites overwhelming evidence of the ill-fit at the time these political bodies and trade union so willingly and wholeheartedly backed Zuma to oust the ‘dictatorial, neo-capitalist’ Thabo Mbeki. Zuma’s rampant sexual and ethnic chauvinism was there for all to see with his despicable conduct and blatant ignorance of HIV during his rape trial. The 783 unresolved charges of fraud, money laundering and embezzlement were there, (arms deal scandal of the late 1990s/early 2000s). Just as the embattled ANC today shouts conspiracy to its critics, so too did Zuma’s turncoat buddies when anyone dared express reservations about his fitness to hold office then. The chickens have come home to roost – spectacularly. – Chris Bateman

It is now a matter of record – rather than an issue for serious debate – that the presidency of Jacob Zuma has been an unmitigated disaster for South Africa.

Zuma’s stewardship – if his tenure since 2009 can be dignified with such a description – has been one long narrative of national decline. The fact that he remains in office is testament to the moral and intellectual decay of the governing African National Congress (ANC) over the course of his presidency.

That the party which produced such giants of the liberation struggle as Albert Luthuli, O.R. Tambo and Nelson Mandela should have repeatedly endorsed the leadership of such a compromised individual provides cause for great sadness at the humbling of a once great political movement.

But, as his presidency staggers on it has become noticeable that some in the ANC’s “broad church” are beginning to peel away in disgust. Over the last two years veterans of the movement have expressed dissatisfaction with the party’s direction and there have been frequent calls for Zuma to stand down.

There have been two unsuccessful attempts to unseat him at meetings of the ANC’s National Executive Committee (in November 2016 and May 2017. And eight motions of no confidence have been tabled against him in parliament. In the latest, 26 ANC MPs voted with the opposition, with a further nine abstaining.

In addition, the ANC’s alliance partners, the South African Communist Party (SACP) and the Congress of South African Trade Unions (Cosatu), have both called for his resignation. Cosatu even barred Zuma from attending its gatherings, an unprecedented humiliation for an ANC leader.

Yet these expressions of revulsion at Zuma’s leadership should be placed within their proper historical context. It is important to recall the role these two organisations had in helping facilitate this disaster in the first place.

Between 2005 and 2007 the SACP and Cosatu were fervent cheerleaders for Zuma in his successful campaign in 2009 to supplant Thabo Mbeki and become ANC president, and thus president of the country. The left projected their own ideological fantasies onto Zuma: they saw in him hope for a “left turn” and a repudiation of the neo-liberal economics which they associated with Mbeki.

This was always a bizarre position. There was nothing in Zuma’s record to inspire confidence that he would engineer a shift to the left. As the country’s deputy president from 1999 to 2005, he failed to strike a single dissenting note about the ideological direction of Mbeki’s macro-economic policy, far less set out an alternative left-wing prospectus.

There was also a significant body of evidence suggesting his politics were highly reactionary, with strong overtones of sexual and ethnic chauvinism which should have set alarm bells ringing for any self-respecting socialists.

For example, Zuma was acquitted of a rape charge in 2006 after deploying a defence that was deeply sexist and patriarchal. Zuma also uttered the notorious comment which would come to haunt him – that he had intercourse with his accuser knowing she was HIV positive but took a shower afterwards as a precaution against infection. This was a comment so steeped in ignorance that it should have immediately disqualified him from ever holding high political office.

But it didn’t end there. Throughout the rape trial his supporters gathered outside the court each day to hurl vicious sexist abuse at his accuser. “Burn the Bitch” was a favourite. Her name and address were also circulated in a contempt of court, actions that paved the way for harassment which eventually caused her to leave the country.

Not once when addressing his supporters at the end of each day’s proceedings, did Zuma condemn the abuse, or reproach his supporters. Instead, in a display of machismo, he chose to whip up the mob with militaristic anthems from the ANC armed struggle era. All of this in a country blighted by violence against women.

Zuma also commenced his presidency with 783 unresolved charges of fraud, money laundering and embezzlement hanging over him relating to the notorious arms deal scandal of the late 1990s and early 2000s. But the SACP and Cosatu leadership chose to view those charges as evidence of a “conspiracy” against Zuma and an attempt to sabotage a socialist presidency.

They would now prefer their unconditional support for Zuma to be considered merely as an unfortunate historical footnote which has not tarnished their ideological credentials. They are wrong. Their willingness to overlook such egregious failings was a cynical betrayal of progressive values.

Equally, Julius Malema, now the leader of the Economic Freedom Fighters, has sought to reinvent himself as a passionate opponent of Zuma. Yet as head of the ANC Youth League back in 2006-2007 he championed Zuma’s candidacy with a messianic fervour usually laced with threats against his opponents such as the infamous “shoot to kill for Zuma” slogan.

Ten years on the chickens have come home to roost, and the grim reality of the Zuma presidency is now visible. The South African state has become little more than a plaything of the Zuma patronage network. This descent into kleptocracy has been documented in rich detail by a number of reports.

Consequently, the SACP and Cosatu have been compelled to recognise that Zuma and his corrupt support networks are indeed a cancer in South African politics, shamelessly enriching themselves in a country still defined by poverty and extreme inequality with unemployment at 27.7% in the first quarter of 2017, and youth unemployment standing at 38%

The SACP and Cosatu may have found their voices over the last six months in lamenting this appalling record. But this has been a deathbed conversion, occurring much too late to carry any real conviction.

The monster that is the Zuma presidency has wrought massive damage on South Africa and is rightly reviled. But the role of the SACP and Cosatu as architects of that debacle should be neither forgotten nor forgiven.