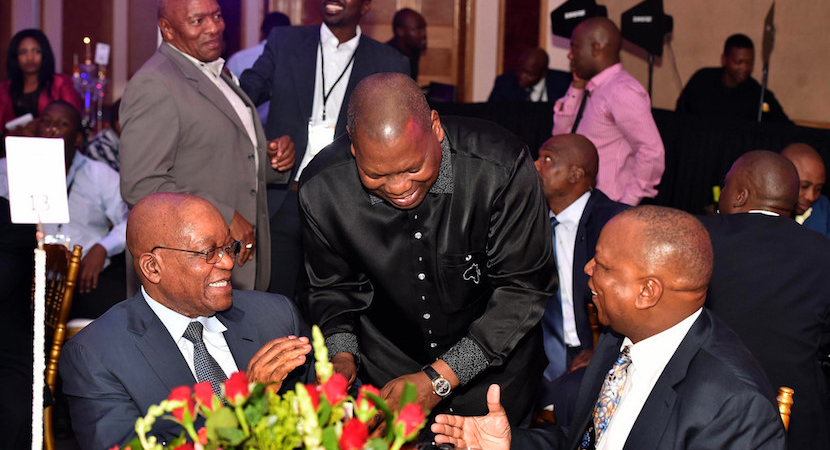 CAPE TOWN — A compromise candidate to lead the ANC is a distinct possibility as party disunity prompted by the two fiercely-opposed but matching top candidates threatens to consign the ruling party to history. That’s one of the nuggets dropped by arguably one of the country’s top political observers, Professor Hermann Giliomee, in an address to the Cape Town Press Club this week. His analysis puts former KwaZulu-Natal Premier and ANC Treasurer General, Zweli Mkhize, squarely in the spotlight as the front runner, should the party instruct Ramaphosa and Nkosazana-Zuma to stand back in the interests of unity. Giliomee’s retrospective looks at South African politics had more seasoned Press Club members sitting up in their seats as they pondered what could have been had one of the giants of SA politics, Frederick van Zyl-Slabbert, not prematurely left the scene. Giliomee, a close friend and trailblazing political ally of the late Van Zyl Slabbert, said that had the tall, genial genius been the Democratic Party leader instead of Zach de Beer, he almost certainly would have accepted FW de Klerk’s offer to be part of their Constitution-negotiating team. Things may have turned out differently. Perhaps direct representation instead of the currently debilitating proportional representation system. We’ll never know. – Chris Bateman

Hermann Giliomee is an historian, a political scientist, an author and a political activist. He was in the Frederik van Zyl Slabbert delegation to Dakar where mainly white Afrikaner leaders met the then exiled African National Congress in 1987. He has pointed out the lost opportunities as a consequence of the Democratic Party not taking up an offer given to them by President FW de Klerk. He spoke at the Cape Town Press Club about his autobiography.

Something that that press didn’t pick up, said Giliomee, was an article by Martin Plaut, a Cape Town journalist with the BBC. “He wrote about (then British Prime Minister) Margaret Thatcher summonsing Pik Botha (the then South African foreign affairs minister) to come and see her in London (in January 1989)… she said she was getting tired of this business… (Nelson) Mandela not being released. What she offered Pik Botha  … was a martshall plan for southern Africa.”

She had spoken to German chancellor Helmut Kohl and they were offering massive investment into South Africa on the condition that steps were taken to implement democracy. Her requirement was that South Africa “become a democracy… and Mandela is released.” The idea was that the Western powers would also keep “somewhat of an oversight (on southern Africa) much as the European community (currently) told Spain, Portugal and Greece … you can become a member… we will help you but you remain true to the essentials of democracy.”

Giliomee phoned Pik Botha at the time. “I said, is this true? He said yes… Margaret Thatcher and I had a sexual attraction for each other.”

That was Giliomee’s way of pointing out the lost opportunities of the National Party era. “I thought that was beside the point…” But the reality was that just as that offer was given by Thatcher, President PW Botha – then president of South Africa – suffered his stroke and FW de Klerk was chosen with a very narrow margin as ruling National Party leader. “So nothing really came of this whole thing.”

It could have been a great breakthrough for South Africa, Giliomee believed. “At that stage if you looked at opinion polls of black South Africans … they were very much in favour of a government of national unity where all groups are represented … a kind of inclusive form of power… not the exclusion of the opposition.” They were not strongly in favour of affirmative action but only that hurtful apartheid laws should be “out of the way”, he believed.

Another opportunity lost was FW de Klerk’s offer to then Democratic Party (forerunner of the Democratic Alliance, the current official opposition) leader Zach de Beer to be part of the negotiating team with the National Party during the constitutional negotiations. De Beer apparently reported the offer to his party but said that there was “no support for that”. Giliomee reported that he had asked Tony Leon – who took over from De Beer as DP leader – whether the DP caucus had discussed the matter. He had reported that it had never been discussed.

If Frederik van Zyl Slabbert – leader of the Progressive Federal Party (forerunner of the DP and DA) from 1979 to 1985 – had stayed in parliamentary politics, he would likely have taken up De Klerk’s offer. “That would have given him (Van Zyl Slabbert) a golden opportunity… if would have been impossible not to make him one of the chief negotiators.”

Asked if this De Klerk offer could have meant a new “Patriotic Front” of the National Party and the PFP/Democratic Party fighting together in the first democratic 1994 national election, Giliomee said it made good sense that the two pro-liberal parties shared a platform – but the offer was only to be part of the negotiating team on South Africa’s future. “It (the NP and DP) would have been in the negotiating forum appearing in the guise of a liberal party… not a nationalist party.”

Although Giliomee didn’t say it, a patriotic front of the NP and the DP may have produced a different outcome for the opposition. It took another 10 years at least for the NP to dissolve itself into the DP – after the DP replaced it as official opposition in 1999.

But then Giliomee is right, that era was riddled with missed opportunities for the South African liberal project and pro-free market political parties.

Asked about Afrikaner economic empowerment during the National Party era, and how it compared with the current black economic empowerment model, Giliomee – who wrote The Last Afrikaner Leaders prior to his autobiography –  said: “I think it would be very difficult to switch (off) the habit of being empowered by the state. Some black leaders felt that the current policies were leading to an elite who relied on their business prospects “purely on the favouritism… the backing of the state.” They believed they needed to be “spawned” by state support. “Once you take a course it is very difficult to change that course.”

He argued that Afrikaner empowerment was largely driven by a nationalist fervour where Afrikaners were not provided state support to any great measure. They were taught to compete with their English-speaking counterparts in business and in the professional environment by picking up their own bootstraps.

Giliomee was asked what was going to happen at the ANC conference in December. He replied. “I think there will be a face-saving exercise. Jacob (Zuma) will be eased out after a month of two. Someone like the treasurer general Zweli Mkhize would become leader. There is so much at stake in the ANC… if you cannot choose one of the two actual front runners (Nkosazana Dlamini-Zuma or Cyril Ramaphosa) … you have to go for a compromise candidate. If it goes to Cyril or Jacob’s anointed successor, there would be a split (in the ANC).” There would be a tremendous incentive to find a compromise candidate.