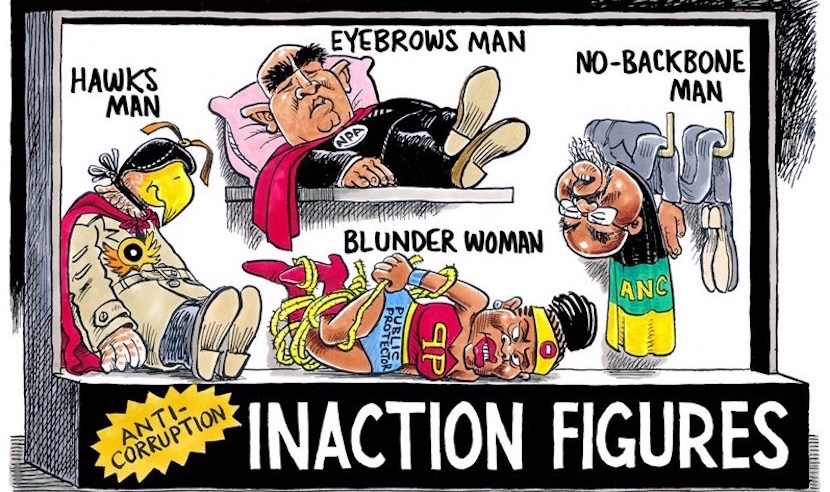 CAPE TOWN — Hawks goons and a SARS Zuptoid’s bodyguard threatened and allegedly assaulted a former colleague of Pravin Gordhan’s in a SARS boardroom in an ongoing attempt to dig up dirt on the outspoken former FinMin. Gordhan told reporters yesterday that he fully expects to be charged, adding that the very future of the ANC is on the line because of state capture. An unapologetic supporter of Cyril Ramaphosa, he believes the deputy president has the integrity, modernity and economic understanding needed to rehabilitate South Africa. As the watershed party elective conference and national elections sharply focus the reptilian survival minds of our State wreckers, we’re in for more dramatic shows of brute force. As events in Zuma’s home province show, murder is not beyond the pale in the battle between grass roots political reformists and “traditionalists” (a meek word to describe Zuptoids). Save South Africa lets its feelings be known here while Gordhan seems confident that speaking truth to power will triumph, even if he pays a high price in harassment and smear campaigns. This read may convince you that SARS is thoroughly captured. It’s frankly embarrassing to have a government compared to corrupt dictatorships like the Ukraine, Venezuela and Thailand. – Chris Bateman

Press statement from Save South Africa:

SARS bosses must stop acting as enforcers of state capture

The Save South Africa campaign is deeply disturbed by ongoing attempts to resuscitate trumped-up charges against former Finance Minister Pravin Gordhan. The latest example of this is the persecution of SARS whistleblower Vlok Symington, who is clearly being punished for refusing to manipulate evidence around Gordhan’s relationship with the so-called SARS Rogue Unit.

The fact that Symington today had to apply to court for protection from the head of SARS shows how desperate the enforcers of the captured state are to try and find something against Gordhan – anything — that will stick.

Symington should be commended for standing his ground and adopting an ethical and lawful approach to the handling of confidential documentation, and for refusing to participate in the manipulation of evidence. As a result, he is being persecuted by SARS commissioner Tom Moyane, who is increasingly emerging as a tool of state capture rather than the custodian of revenue collection.

The fact that a whistleblower like Symington has had to apply to the High Court for protection from Moyane speaks volumes about the politicization of SARS by its captured leaders and its increasing role in protecting the architects of state capture. It also reinforces the need to ensure that South Africa implements its legal framework in which whistleblowers are protected, rather than being pursued, persecuted and punished.

South Africa should be deeply concerned at what is being exposed about SARS, and the role being played in enforcing state capture by leaders of the revenue services.

Under normal circumstances, we would expect the President of the Republic – to whom Moyane reports – to provide leadership and insist that these attempts to manipulate evidence and interfere with judicial processes be stopped.

We would also expect an independent investigative agency such as the Hawks to accept, once and for all, that there is no case against Gordhan and his former colleagues at SARS.

But with a punitive and corrupt President like Jacob Zuma, this is obviously too much to expect – particularly as large parts of the criminal justice system, including the leadership of the National Prosecuting Authority and the Hawks, seem to exist primarily to protect the kingpins of state capture rather than pursuing them.

The continued drive to persecute Gordhan stands in stark contrast to the cover-ups into the tax affairs of the Gupta family, and the lack of action against Moyane’s right-hand man, Jonas Makwakwa, after he was caught depositing millions of rands into ATM’s.

Well played, Vlok Symington. You are going to expose just how captured Tom Moyane really is.

What is happening at SARS is symptomatic of the general erosion of governance and the collapse of the rule of law, and it must be stopped. And the only way to put an end to this abuse of power and undermining of the criminal justice system is to put an end to Zuma’s term as President, to unravel the state capture enterprise, and to restore the integrity of the leadership of SARS and other state institutions.

The Save South Africa campaign demands an end to the abuse of power at SARS and other captured institutions, and the replacement of Moyane and other dubious characters with credible leaders who are able to put the people first — rather then our captured President and his cronies.

(Bloomberg) — Former South African Finance Minister Pravin Gordhan said he expects to be charged over an investigative unit set up when he ran the revenue service as a battle rages in the African National Congress to choose a successor to President Jacob Zuma as party leader in December.

Gordhan, who was fired by Zuma in March, made his comments on Thursday, a day after a police unit known as the Hawks told his predecessor at the Finance Ministry, Trevor Manuel, and his then-deputy, Jabu Moleketi, to provide affidavits on the creation of the tax service’s division by Friday.

“They will probably charge us, let’s see what happens,” Gordhan said at a conference in the Austrian Alpine village of Alpbach. “We’re not just sitting back and taking punches. We’re going to resist all of these things because at the end of the day it’s not about our individual futures, it’s about the future of younger generations.”

The National Prosecuting Authority has been probing the unit in an investigation that Gordhan, opposition parties and civil-society groups say is politically motivated. The former finance minister described the latest moves as an attempt to discredit politicians who oppose Zuma and are fighting against the plunder of state resources in Africa’s most-industrialized economy.

Scandals have shadowed Zuma, 75, during his eight-year presidency, including a finding by the nation’s top court that he broke his oath of office by refusing to repay taxpayer funds spent on his private home.

The nation’s graft ombudsman accused him of allowing members of the Gupta family, who are in business with his son, to influence cabinet appointments and the award of state contracts, referred to as “state capture.” Zuma and the Guptas deny wrongdoing.

On Aug. 8 more than two dozen of the ruling African National Congress’s lawmakers backed an opposition motion of no confidence in Zuma in a secret ballot in parliament. While he survived, the party fired Makhosi Khoza as chairwoman of a portfolio committee and wrote to Derek Hanekom, the head of its disciplinary committee, rebuking him for his Twitter postings calling for the president’s removal.

Gordhan didn’t reveal how he had voted in the motion. “This was a secret ballot and remains so,” he said.

Zuma is due to step down as the ANC’s leader in December, with his ex-wife, Nkosazana Dlamini-Zuma, and Deputy President Cyril Ramaphosa seen as the leading contenders to replace him.

“It’s a massive tussle — it’s about the future of the ANC as we’ve known it,” Gordhan said. “Either you follow the capture of the ANC,” or change the party’s character and “recapture the state, which has now gotten into the wrong hands. People like ourselves are backing Mr. Ramaphosa, because we believe he has the integrity, to put it bluntly. And secondly, he has the modernity to innovate, to allow new ideas to emerge, understands the economy. ”