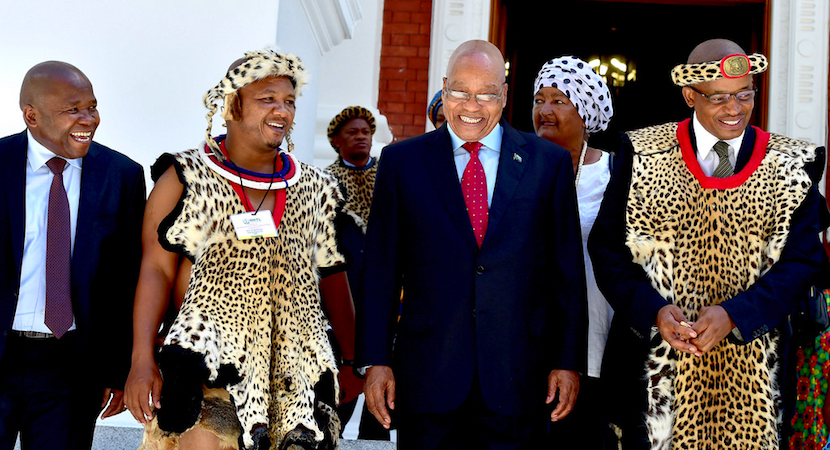 CAPE TOWN — The ANC’s Zuptoid-dominated leadership – strategizing and training for the party’s elective slug-fest this December, seems to be putting their money and future prospects in the hands of their KwaZulu Natal branches. ANC Secretary General, Gwede Mantashe, scotches persistent rumours that the all-important elective conference may be delayed to give the Zuptoids time to help their crucial KZN supporters retain and regain provincial power. He says it’s not the regional executive that votes, but the branches. Fair enough, but we all know the influence any provincial leadership can have on its grassroots members. Culturally and historically, the KZN masses take their lead from the power brokers, the big men, their benefactors, the chiefs. Now we have the legal legitimacy of the Zuma-supporting provincial executive and cabinet destroyed by a court which ruled they were irregularly elected. The anthropologists are going to have a field day along with the political analysts. Will the traditionally Zuma-supporting home of the archetypical Zulu warrior go with history and tradition, or will it be influenced by an otherwise credibility-impugning, Western legal concept? It’s a real conundrum for an until-now confident Zuptoid faction. My money is on the Nkosi yamakhosi (the chief of chiefs), holding sway. He may not be the King, but he commands as many bended knees as King Goodwill Zwelithini kaBhekuzulu. Watch Zuma hit the hustings there now. – Chris Bateman

(Bloomberg) – The top leadership of South Africa’s ruling African National Congress starts meeting on Friday in a bid to heal a bitter split in the key region of KwaZulu-Natal that could derail its plans to elect a successor to President Jacob Zuma as party leader in December.

The three-day meeting comes after the High Court annulled the election of Zuma allies as the province’s party leadership because the conference that chose them wasn’t lawfully convened. While the officials who lost the case said they’ll challenge the judgment, the ANC’s National Executive Committee may overrule them to ensure its Dec. 16-20 national elective conference goes ahead.

Rivalries run especially deep in KwaZulu-Natal, which has the largest number of party members and is Zuma’s home province. The Institute for Security Studies has recorded about 100 political killings in the region since 2013. Nationally, the ANC is in turmoil because of the scandals that have shadowed Zuma, 75, during his eight-year presidency and the widening split between supporters of his ex-wife, Nkosazana Dlamini-Zuma, and Deputy President Cyril Ramaphosa, who are the leading candidates to succeed him.

“There will be an attempt at Friday’s meeting to try and consolidate unity within the ANC, but I honestly believe it is too late,” Sethulego Matebesi, a political analyst at the University of the Free State in the central town of Bloemfontein, said by phone. “There is a cancer that has spread too much within the ANC.”

The infighting and the legal challenges in KwaZulu-Natal could foreshadow an even bigger crisis around the December congress, said Ralph Mathekga, a political analyst at the Mapungubwe Institute for Strategic Reflection, a Johannesburg-based research group.

“The elective conference might end up being interdicted — you cannot rule it out,” he said. “The outcome can also be questioned in court, because we have seen this happening at the provincial level and at the regional level. Make no mistake, we might see court challenges around this conference.”

Such an outcome could delay Zuma’s departure as party leader and throw into question who would succeed him to become the ANC’s presidential candidate in 2019. It may also leave Africa’s most-industrialized nation with a leadership vacuum at a time when the economy is forecast to expand less than 1 percent this year and unemployment is at a 14-year high.

“This just brings uncertainty to Zuma,” Mathekga said. “He has got too many challengese on too many fronts at the same time.”

Zuma faces almost daily reports of new details on his friendship with the Gupta family and its alleged influence over his administration which is known locally as “state capture.”

The scandal has swept up global companies such as accountants KPMG LLP and consultancy McKinsey & Co., which have been implicated in facilitating, being party to or turning a blind eye to their deals. Public relations firm Bell Pottinger LLP collapsed after it was found to have mounted a racially divisive campaign while work for the Guptas. Zuma and the Guptas deny wrongdoing.

Zuma has survived two bids to oust him by members of the NEC since November and last month saw off an opposition motion of no confidence in his leadership that was backed by more than two dozen ANC lawmakers in parliament. The party, which came to power in 1994 under Nelson Mandela, suffered its worst electoral showing in municipal elections in August last year, losing control of Pretoria, the capital, and Johannesburg, the financial center.

Last week, the Supreme Court of Appeals considered an opposition lawsuit aimed at compelling prosecutors to reinstate more than 700 graft charges against Zuma that were dropped just weeks before he became president in 2009. The court reserved its judgment and didn’t say when it will be delivered.

Hawks have offered R450-000 reward for information that could lead to the arrest of suspects in political killings in KZN.#AMLive #SABCNews

While the case against Zuma is unlikely to take center stage at the NEC meeting, factionalism and infighting of the type that’s occurring in KwaZulu-Natal will frustrate efforts to unify the 105-year-old party and ensure a smooth succession, according to Roland Henwood, a politics lecturer at the University of Pretoria.

“The problem with the NEC is the level of division, lack of trust that informs what is happening in the ANC,” Henwood said. “It has in a sense paralyzed the ANC, and that paralysis is affecting everything that happens within the party.”