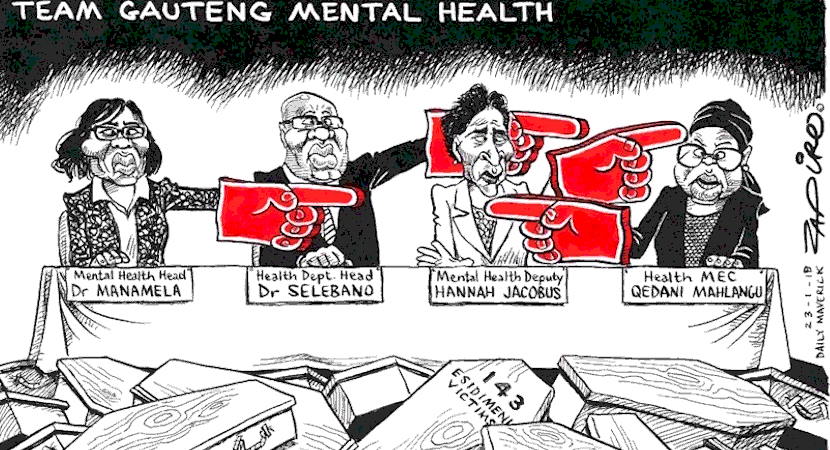 CAPE TOWN — A light has shone briefly in the callous darkness of an uncaring State – held by none other than former deputy Chief Justice Dikgang Moseneke in delivering a far-reaching and very specific Life Esidimeni arbitration ruling. He described Gauteng Health Department officials as having acted irrationally, in blatant breach of the Constitution by discharging several hundred mentally-ill patients into incompetent and unprepared NGO’s, causing 143 deaths. Governance specialist, lawyer and columnist Judith February, celebrates his use of the word ‘torture’ to describe what now-resigned Gauteng Health Minister Qedani Mahlangu and her minions caused to happen. She doubts these functionaries – because that’s what they were in testimony – and other government officials like them, will do much soul-searching at the comments by this man of great legal stature and integrity. His ruling came in the same Human Rights Week five-year-old Lumka Mketwa of Bizana in the Eastern Cape fell into a pit latrine toilet and died, the second such death involving school pit toilets. Basic Education Department infrastructure budgets would have obviated these tragedies – had they been spent. We’re looking at incompetence heaped on dysfunction, aggravated by carelessness towards the very masses so many deployed cadres boast of having personally helped liberate from oppression. This story published courtesy of the Daily Maverick. – Chris Bateman

There are moments in life when integrity simply trumps the tawdry and the unethical.

As former deputy Chief Justice Dikgang Moseneke read out his 100-page arbitration ruling after the Life Esidimeni hearings, his own integrity and that of the process he led should give those in power reason to do some real soul-searching, if they are so inclined.

The tragedy left 143 patients, many of them mentally ill, dead. These patients had been transferred to NGOs once the Gauteng Department of Health had terminated the public-private partnership with Life Esidimeni hospital. What happened to them thereafter was the subject of a report by Health Ombudsman Malegapuru Makgoba. That report recommended an arbitration process that was presided over by Moseneke.

The stories are heart-wrenching, with some patients loaded onto the back of vans as they were being transferred to “NGOs” clearly not equipped to deal with the patients assigned to them. The former MEC for Health, Qedani Mahlangu, testified before the arbitration after much fuss and then proved to be a thoroughly unsatisfactory witness.

Moseneke delivered his groundbreaking findings this week and one cannot miss the irony that it was done in the shadow of Human Rights Day. Where were the human rights of the vulnerable who died in this shameful incident?

There was no one better to preside over the matter than Moseneke, a man of integrity, compassion and with the legal acumen to craft some form of redress for the victims’ families.

He eventually found that the government officials had acted in “blatant breach of the law and the Constitution”.

Ending the Life Esidimeni contract for no logical reason and then moving patients without regard for their well-being was “irrational”. Moseneke described the mass discharge of patients as “torture”. He did not mince his words.

He further ordered that the state pay the families compensation within three months, that is by no later than 19 June 2018.

Government was, in addition, set to pay the legal costs for the arbitration and was ordered to provide trauma counselling for up to three family members for each patient, alive or surviving. Of course, no amount of money will bring back the loved ones who have been lost, yet this was always about establishing culpability and holding officials like Qedani Mahlangu and others accountable for their decisions and their arrogance in defending them.

The arbitration ruling is also a victory for civil society organisations like SECTION27 which doggedly fought this matter on behalf of the victims’ families. The ruling seemed not only sensible but there was an overwhelming feeling that justice had prevailed in the end.

In a poignant gesture, Moseneke said he would be donating his arbitration fee towards funding law students who would take up such social justice matters in future. One cannot but admire Moseneke, a legal colossus but, importantly, a man of principle and deep-seated integrity. Amid the tawdry scandals of everyday politics, his sense of justice helps to solidify our faith not only in such legal processes but also in all that is good about South Africa.

This was after all the very same week that Lumka Mketwa of Bizana in the Eastern Cape fell into a pit latrine toilet and died. She was five years old. Initially, there was confusion about her identity but her name should be remembered alongside that of Michael Komape, another young child who drowned in a pit latrine toilet in Limpopo in 2014. That matter is also before the courts as the Komape family seek damages from the state.

Minister of Basic Education Angie Motshekga described young Lumka’s death as “undignified” and “incredibly disturbing”. These words are cheap to the parents and the people of Lumka’s village. A child has died as a direct result of a lack of care and what can only be described as criminal neglect. Lest we forget, the state argued the Komape matter in court and its lawyers even tried to suggest (perhaps even more than that) that the Komape family were trying to become rich because of their son’s death. Callous, cold, cruel.

The state has failed the poor and vulnerable repeatedly and perhaps the Life Esidimeni ruling will cause those in power to exercise their minds on the constitutional duty to uphold citizens’ dignity and human rights.

Human rights rallies and speeches are pointless when the majority of South Africa’s citizens have their rights breached on a daily basis. Interactions with the state often prove futile or soul-destroying.

Just when we thought this was something we could all agree on, Western Cape Premier Helen Zille put out the following tweet on 20 March:

“It is good that the families of the Life Esidimeni victims have received a measure of justice and compensation. I would like an answer to this question: What did they do, before these tragic deaths, to raise the alarm about their loved ones starving + living in profound neglect?”

It is good that the families of the Life Esidimeni victims have received a measure of justice and compensation. I would like an answer to this question: What did they do, before these tragic deaths, to raise the alarm about their loved ones starving + living in profound neglect?

As many on Twitter condemned the comment, Zille did what is now routine for her and defended the tweet. It was a most unfortunate and insensitive tweet, not to mention in extremely poor taste. One wonders what goes through the mind of a public representative when crafting such a comment in 140 characters? Such gratuitous comments in the face of great tragedy cannot really be justified and suggest that Zille is tone deaf to the powerlessness and lack of voice which extreme poverty often creates.

Does Zille realise that some of the victims’ families had no idea where their loved ones were and spent many months wandering around from place to place looking for them? No one should have to be treated in such a way at the hands of the state.

When you wake up on Human Rights Day to see that Helen Zille is gloating that the Esidimeni tragedy didn't happen in the Western Cape. Using the deaths of people to gloat that you have a well-run province is disgusting.

Part of living in South Africa is about finding ways of seeing and empathising with those in whose shoes we may never travel. Surely Zille should know that?

In his ruling, Moseneke showed us how the law can be an instrument for both empathy and accountability.

In this week of reflecting on the human rights challenges South Africa faces, there are important lessons to be drawn from both Moseneke’s ruling but also the dignified manner in which he chose to deal with the matter.

True justice for the Life Esidimeni victims, and for Michael Komape and Lumka Mketwa, will of course mean that such egregious breaches of human rights never happen again. The unfortunate South African reality is that they are likely to.