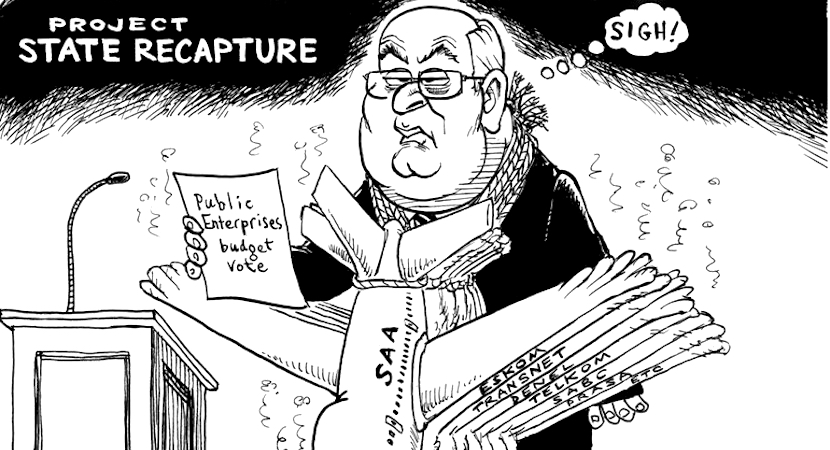 CAPE TOWN — Pure logic and circumstantial evidence suggest that far more than just incompetence and dysfunction are responsible for the financial melt-down of so many state-owned-enterprises (SOEs). While it’s cost the fiscus tens of billions and as many more to fix, those amounts of money only go missing if they’re being stolen. So, we now add Denel’s CFO to his Eskom and South African Airways counterparts in being suspended. That’s just over the last 12 months. To use a Denel-linked metaphor, the big guns went eerily silent when Public Enterprises Minister Pravin Gordhan began his crackdown of SOE graft, dysfunction and corruption. Boardroom overhauls are the new game in town – that or sudden management resignations, like that of Transnet CFO, Garry Pita’s, ostensibly for health reasons. “Special leave” now has its own unique connotations – compassion having little to do with it. – Chris Bateman

Denel follows utility Eskom Holdings SOC Ltd. and South African Airways, which have both suspended their CFOs within the past 12 months. State-owned businesses are at the center of graft allegations that plagued the administration of former President Jacob Zuma, prompting his successor, Cyril Ramaphosa, to order a string of boardroom overhauls to initiate fresh starts.

Transnet SOC Ltd. CFO Garry Pita resigned in April, citing health reasons. That doesn’t absolve him of accountability should he be found to have had a role in any mismanagement at the state and ports operator, the Department of Public Enterprises said at the time. Transnet and Eskom have both been linked with deals involving the Gupta family, who were friends with Zuma and in business with one of his sons. All deny wrongdoing.

Mhlwana has been put on special leave pending the outcome of a probe into allegations of misconduct made against him, Pretoria-based Denel said in an emailed statement Monday. The investigation should be completed by the end of next month. While the CFO has been in the post for less than a year, various whistle blowers have come forward since a new board of directors was appointed in April, the company said.

Denel’s new board has the task of resolving a multi-billion rand debt problem, with R2.3 billion ($170 million) of bonds maturing in September. The company, which defaulted on a R290 million from the Johannesburg municipality earlier this month, has said it’s in talks with the National Treasury and hoped to have a plan in place by the end of this month. It received a government guarantee late last year to pay salaries and suppliers.