PRETORIA (Reuters) – Bulls loose forward Dewald Potgieter has been ruled out for six months after surgery on a torn bicep, the 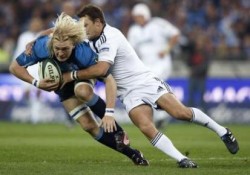 Potgieter, who has six caps for South Africa, was injured in a defeat at the Wellington Hurricanes a fortnight ago and flew back from New Zealand for the operation, along with team mate Deon Stegmann, who will undergo an operation on a groin injury next week and could be out for up to four months.

The 27-year-old Potgieter only returned to the Bulls in March after spending six months playing in Japan.