It’s a safe bet that politicians are not exactly the most respected South Africans right now. You’ve really got to scratch to find any who would rank higher than used car salesmen in the public’s perception. Even my former colleague from the RDM, Helen Zille, blotted her copybook through “the kiss” and quickie divorce from Steve Biko’s ex. Helen is a classy lady with courage and persistence and is sure to bounce back. On the other hand, whether Nkandla-besmirched President Jacob Zuma will ever again visit a public arena without being boo-ed is debatable. But as the wise words contained in this mail from Biznews community member David Melville illustrate, at least we’re not alone. Politicians the world over have been reviled for centuries. They are, well, not the kind of people you’d like your daughter to bring home. Perhaps, instead of meekly swallowing their lies and excusing their incompetence and grasping from the public purse, we should simply start treating them the way they deserve. After all, there’s a great Constitution and Thuli Madonsela to support any activist citizen. – AH

” Politics is the gentle art of getting votes from the poor and campaign funds from the rich, by promising to protect each from the other.” 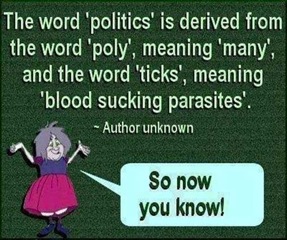 “A politician is a fellow who will lay down your life for his country.”

“I have come to the conclusion that politics is too serious a matter to be left to the politicians.”

“Instead of giving a politician the keys to the city, it might be better to change the locks.”

“Those who are too smart to engage in politics are punished by being governed by those who are dumber.”

“Politicians are the same all over. They promise to build a bridge even where there is no river.”

“When I was a boy I was told that anybody could become PM; I’m beginning to believe it.”

~Quoted in ‘Clarence Darrow for the Defence’ by Irving Stone.

“Politicians are people who, when they see light at the end of the tunnel,  go out and buy some more tunnel.”

What happens if a politician drowns in a river?

What happens if all of them drown?