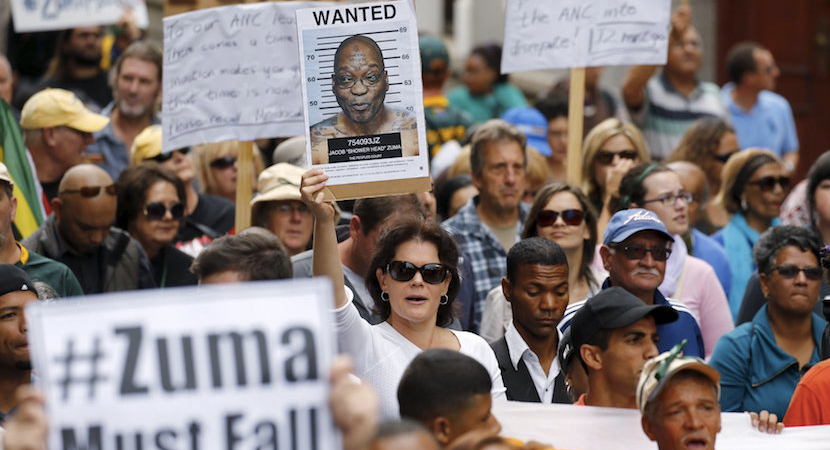 A committed South African makes a heartfelt appeal for a national referendum to rid the country of a president who is increasingly being seen as (but not yet proven to be) corrupt. So far, the ANC, has, for all its minority of brave members shouting ‘no more,’ closed political ranks behind President Zuma. A referendum, while nostalgically remembered for its “white’s only,” contribution to the dismantling of apartheid, won’t work legally. That’s according to the Leader of the Opposition, Mmusi Maimane. He was responding to a similar initiative around Gauteng’s e-tolls two years ago. Basically, he said it’s a dead end. The Constitution makes provision for either the president (in respect of a national referendum) or a premier (in respect of provincial referendum) to call for a referendum in terms of an Act of Parliament. Bit of a Catch-22, given the present incumbents. However, here’s the real rub; 20 years into our democracy, no such Act exists. Maimane says this effectively denies citizens the opportunity to participate in executive policy decisions, particularly those that are unjust and incite public outrage. But there’s no empowering law governing how, if or when to hold a referendum… Lovely sentiment – double-blocked it seems… – Chris Bateman

Last Thursday’s performance in Parliament indicated that Zuma’s fate must now rest with the people of South Africa. The Zupta rot is too deep, and the factions within the ANC and government are either intimidated into silence, or too corrupt to be trusted to represent our interests. We are now effectively seeing the capture of our Parliament too.

On the 17th March 1992, South Africa held a whites-only referendum. This gave the franchised people of the time a direct voice, and they voted against government policy, choosing instead to abolish apartheid. We, the South African people, as well as the vast majority of business, with overwhelming support from Unions and honest government officials alike, want Zuma to step down. Our country was near captured, with rife corruption at all executive levels. For this reason, we can’t leave the political vehicle of the ANC, that is corrupt at every major level to put in motion the mechanics of removing Zuma. We therefore call for a referendum, having previously succeeded in stopping apartheid in its tracks, to now stop corruption at the highest seat in this beautiful land of ours.

We, the South African people call a referendum to vote on whether Zuma remains or leaves.