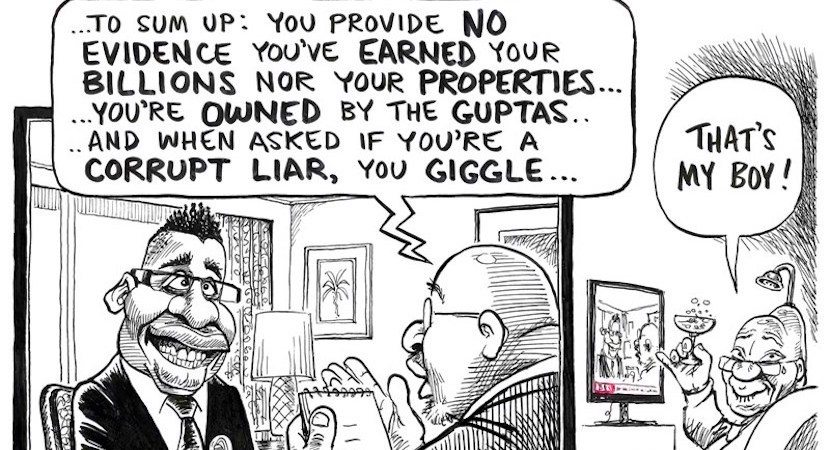 JOHANNESBURG — The fact that President Jacob Zuma’s son, Duduzane Zuma, decided to come out last week and finally comment on the scandals surrounding him amid the Gupta saga could signal that he’s increasingly coming under pressure. In a bizarre letter to Pravin Gordhan, Duduzane Zuma blamed the former finance minister for getting his ‘friends’ (ie the banks) to shutter his South African accounts. And then in a BBC interview, Duduzane proclaimed his ‘innocence’, saying that he’s not corrupt and that he’s not worried at all about possibly going to jail. The reality is that Duduzane has a lot to answer for and he is prime suspect number one if a criminal investigation eventually goes ahead. Errol Horwitz, in this open letter, provides Duduzane with another reminder of this. – Gareth van Zyl

It’s me again, one of your timeshare tax paying beneficiaries impatiently waiting receipt of the keys to your Dubai apartment for well-earned R&R.

It’s been awhile since I sent you an open letter to set up a schedule for timeshare for your R18m purchase of a swanky apartment in Dubai’s new downtown. Although you recently denied the purchase, leaked Gupta emails strongly bespeak otherwise. So your disavowal without more, simply won’t cut it.

I know you have been stretched for time slogging over your poorly (ghost?) written letter to the former finance minister Pravin Gordhan, and preparing for your interview with the BBC. In both instances your makeover, even by Bell Pottinger standards was a miserable failure. Nonetheless, we taxpayers who unwittingly bank-rolled the purchase of your apartment will not be treated as chopped liver, especially when your good friends and business associates, the Gupta family, get all the attention.

One can understand your need to devote your time protecting the Guptas. Because of them, and your unequaled direct line to the seat of power, you have amassed enormous wealth. However, do not forget the unwitting role of South Africa’s taxpayers in the amassing of your fortune. Doesn’t it remind you of Cinderella, and her loathsome immediate family, who painstakingly victimised Cinderella for their selfish and greedy ends?  Without South Africa’s tax revenues for the pickings you would still be blubbering that you were “not born with a silver spoon in [your] mouth”, no different from millions upon millions of your countrymen. So, think about the common folk who contributed to your ill-gotten gains. Just as you commented that the Guptas like you, and you like them, we too want to like you. As you said in your interview with the BBC “I think I am a likable guy”, and assuming it to be true, likable sentient guys, like yourself, deserve the following judicious advice, especially since the la belle vie you enjoy so much may transform your lifestyle into that of an orange jumpsuit.

Historically you have consistently embraced a reclusive profile. This unexpectedly changed when you launched a stinging open letter attack against Pravin Gordhan, followed by a BBC interview. You apparently did so because of mounting pressure over state capture revelations and corruption, and being singled out as one of its pivotal figures. In other words, Dudu, you were feeling the heat, and decided that a pre-emptive strike would be in your best interests. It was, as you say, “the right time to step up”. Yes, but rather it should be the time to come clean. You must know OUTA has filed a criminal complaint against you and the Gupta family for treason, racketeering, extortion, fraud and forgery. If convicted for these particularly serious crimes, expect to be incarcerated until you are old, grey and suffering from disabilities and diseases common among elderly people.

Duduzane Zuma says Pravin is a failed minister. I'm afraid to ask what he must think about his father.

In your rant-filled letter to Gordhan you stated that an investigation into state capture conducted by the Hawks found no wrongdoing. Nothing is further from the truth, inasmuch as the Hawks confirmed that investigations into state capture are ongoing. Its spokesman Hangwani Mulaudzi, said that the Hawks “were very much amazed by the content of [your] letter itself”. So were others who characterised your letter as ‘bizarre’, ‘strange’, and a desperate effort to divert attention from you.

Dudu, if you persist in babbling about your innocence you will find yourself between a rock and a hard place. As I said earlier you need to come clean. You can begin by selling your Dubai apartment, and returning the proceeds, and other ill-gotten gains to the fiscus.  I can assure you that as far as the apartment is concerned South Africa’s taxpayers will readily cooperate in agreeing to waive their use rights to the apartment.  More so, because, as travel writer Alex Proud of the Telegraph puts it:  “who in their right mind would want to visit Dubai? . . . horrendously hot and humid for nine months of the year . . . higher, glitzier, nastier:  it’s like a city designed by Donald Trump”. One telling comment by Proud that struck a chord with you in mind:  “When all you care about is money, eventually you get [to] Dubai”.

I have no way of knowing the extent of your attention span, so I will conclude by reminding you of a quirk of human nature in circumstances similar to yours, namely, when the chips are down self-preservation is all encompassing. By that I mean the first of multiple defendants accused of a crime(s) to negotiate a plea deal will throw the others under the bus. So, knowing your co-defendants as you do, do the math as the result should be obvious.

In the earlier open letter sent to you it was suggested that as timeshare buddies we meet over a drink. With circumstances being what they are, forget it was ever suggested. After all you are damaged goods.