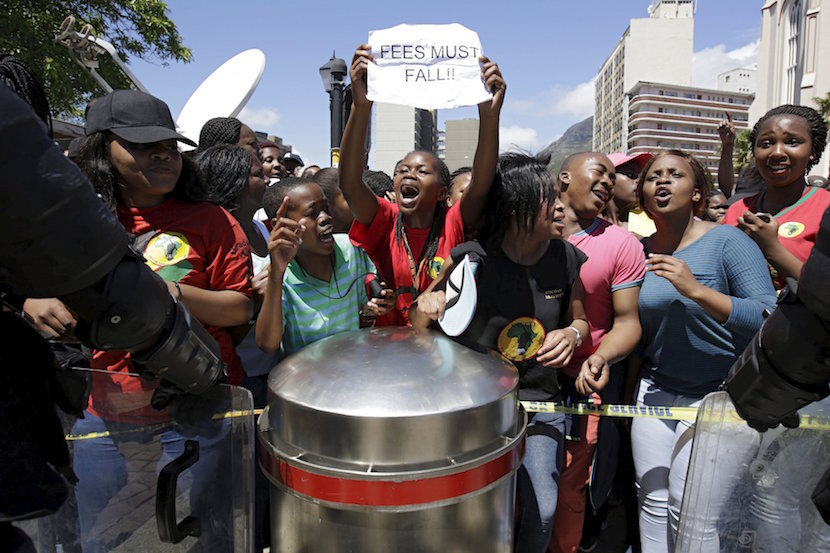 Matthew Lester is at it again, this time looking at the impact of a zero percent University fee hike. The challenge now he says is, as fee increases have been waived this year, what about next? The country can’t afford to totally cover tuition fees unless it abandons projects like National Health Insurance, which Lester says just cannot happen. It’s a delicate balancing act and there’s no right answer but we can only hope the top brass are throwing ideas around, to find the ‘most right’ answer to the problem. As Lester says, the most equitable solution. Great stuff. – Stuart Lowman

For years National Treasury has been reluctant to hand out any benefit that cannot be sustained on the long term. Well, on Friday afternoon President Zuma did just that.

The rough assessment of the cost of a 0% fee increase is R3bn. And in the context of state expenditure of R1.2 trillion for 2015/16 that’s actually not a lot.

Hopefully the universities will be compensated accordingly.

But after last weeks performance there can be no doubt that the demands have just started. So there can be little prospect of a fee increase next year, or any year thereafter. So the effect compounds. And ultimately becomes unsustainable.

So if 6% of the fee base is R3 billion, lets say that the total fee base of RSA universities is in the region of R50 billion per annum. Now that’s a different matter. That cannot be financed on the current tax base. It just can’t. And RSA cannot borrow any further; our national debt is maxed out.

And, depending on how you look at it, neither should free education for all be a consideration in RSA. This is a debate similar to the VAT debate around zero rating of basic foodstuff.

Prima facie nothing sounds better than a complete exemption. But then everyone gets it, rich and poor alike.

In recent research conducted by the IMF and the Davis Tax Committee the following graphic showed, according to income deciles, who enjoys the benefit of VAT zero rating of basic foodstuff. 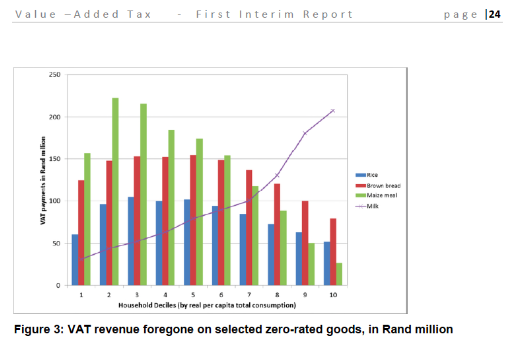 The conclusion reached was that the rich obtain substantial benefit from a blanket zero rating and thus the practice should not be extended. It must always be better rather to collect the revenue and redistribute the additional income through a targeted transfer to the poor.

So the wealthier parents of students also scored thanks to #feesmustfall. If the fee is currently R50,000, they save R3,000. And that’s enough to buy a wealthy dad a decent crate of whiskey. It is just as good as a tax reduction.

It would be most interesting to get some more statistics on who actually enjoys the lions share of #feesmustfall. The top income deciles probably got most of it, because so few of the students of the poor have any prospect of getting to university.

Now, in the context of fees, the wealthier parent gets hacked off. They say it is the taxes they pay that keep the universities going anyway. Why should they be excluded from #feesmustfall?

So where is a solution?

I am going back more than 30 years now, when I was a 4th year student at Rhodes University and ran out of money.

The deal at the time was produce a half-decent academic record and your parents’ most recent income tax assessment and your final year’s residence fees were waived. My dad was a teacher, so I got it.

There is an important aspect in the story. Way back then Rhodes gave post grads residence bursaries so that residences kept a wide cross section of students. And, at the time, the biggest advantage of staying in residence was that the senior students helped those struggling below. They acted as tutors. They really did! And it worked!.

The most successful student program in RSA must be SAICA’s Thutuka project. And the essence of the program is not just that fees get paid. Students have to have extra assistance, not an option. And it’s paid for.

Another aspect of Thutuka is that it doesn’t just work on handouts. Thutuka is substantially funded by SAICA, the business community and the SETA’s. It is a true partnership between student, university, business and government.

RSA cannot afford a blanket exemption on university fees. Unless perhaps we abandon important projects such as National Health Insurance. And that, with respect to #feesmustfall, just cannot happen.

But if we really think and talk about all aspects of transformation of universities we can make a plan that could be equitable for all. I have no doubt.