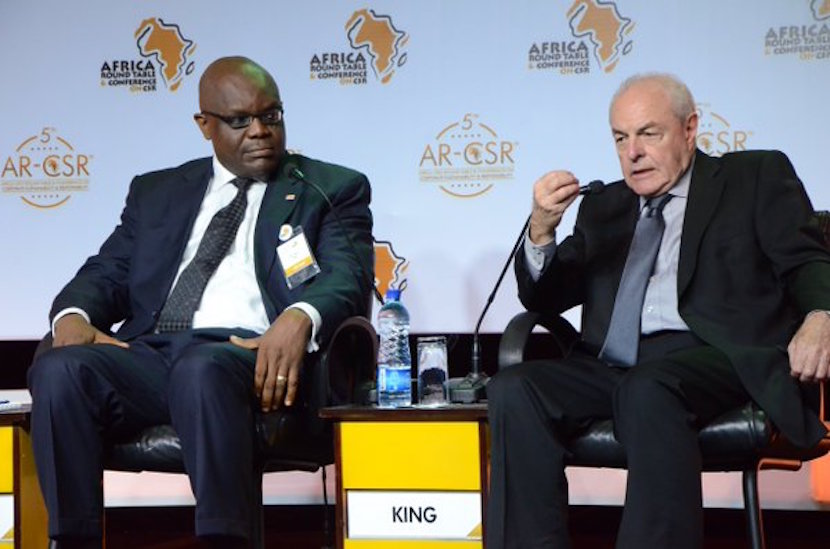 One of the advantages of not having an office and a cappuccino machine in Johannesburg is that I have a reasonable excuse to drop in on professional colleagues for a chat. And that can be worth a great deal.

One of my favorite victims is Mervyn King SC. I visit him, often unannounced, under the auspices that he is a visiting professor at the Rhodes Business School. It is indeed a privilege is to talk to one of the few who have kept their style while the rest of the world seems to have long lost it. And he is still batting hard for his causes at the age of 79.

Mervyn King served a short term as a judge in the supreme court, resigning in 1980 after an altercation with PW Botha. It took a lot of guts to do that, particularly as the option of returning to a lucrative career as a practicing Senior Counsel was not on.

Let’s be kind and say that in the past, South Africa’s business practices were based on a very wide interpretation of Milton Friedman’s ‘the sole responsibility of business is to make a profit.’ There are copious examples of massive profits being made at the expense of disadvantaged people and planet. Some of this came out in carefully worded apologies before the truth and reconciliation commission. Perhaps we will see much more when class action suites reach the courts. But most of those who really benefitted are now dead or long since retired. So they cannot be held responsible.

So when, in 1993, the Institute of Directors, South Africa, asked Mervyn King to chair the first official committee on corporate governance it was a brave move for him to take on the job and publish King I by 1994, followed by King II, III and now the draft of King IV. It is amazing that King has been on the case of corporate governance for 23 years.

His visits to the Rhodes Business School remain the highlight of the academic year. The students just adore him. And us nerds in academia, who reckon we know it all, can always benefit from the sound advice of a good friend.

The big challenge is yet to come. Will Government embrace the principles contained in the King IV draft and breathe life into creating high standards of governance in the public sector? That would achieve a better life for all South Africans than any cocktail of increased taxes and State expenditure.

South Africa has acknowledged many champions of business. For me, in the context of the business community in the new SA, Mervyn King SC wins the gold medal, hands down!

Happy Birthday Mervyn. May there be many more. And thank you for your fantastic contribution.