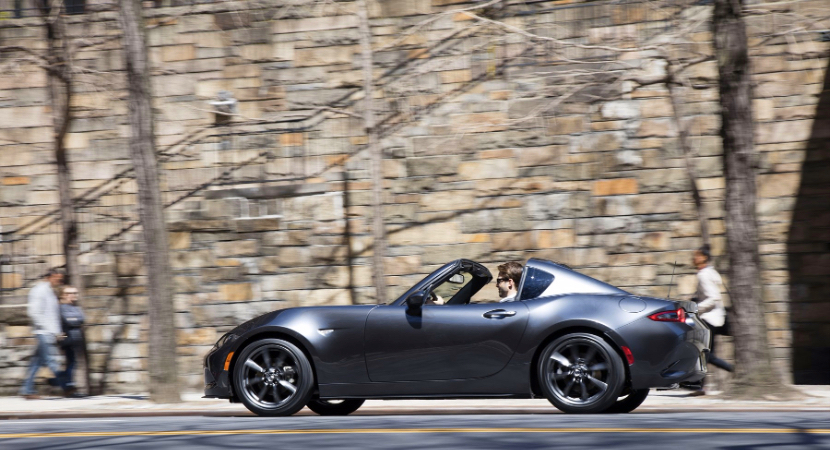 I love the Mazda MX5, the concept worked like a charm all the way back in 1989 and it still works just as well in 2017. I owned a Mazda MX5, specifically the NC model, which I bought as my very first car that I used as everything from a long distance cruiser, track day toy and daily commuter. As an introduction to the world of rear wheel drive I think it’s one of the very best ways to do so. The only way you could ruin the experience would be to introduce an automatic gearbox into the mix. And oh dear, what do we have here…

Let’s deal with the elephant first.

Right so it’s an auto and that’s a big problem for this car. Sure gear changes are smooth and responsive, I’m even happy to say this is a great auto gearbox and one that we’ve been more than happy to live with in all the Mazda’s other rather excellent offerings.

But this is an MX5. A small, lightweight and nimble roadster. THE small, lightweight and nimble roadster. A crucial part of the experience has always been that manual gearbox, the integral nature of which has over the years have helped the MX5 worm its way into the hearts of millions around the world. Luckily I have driven the manual version that comes in the normal soft top and I can confirm that it is still an absolute peach. I’m therefore going to stop waffling on about gearboxes and just try remove the fact this is an auto from the equation for a second.

So what does RF stand for?

Retractable Fastback probably wouldn’t have been my first guess and that’s what makes this new MX5 RF so unique. Sure the hardtop version has always been somewhat controversial as it adds weight over the soft-top and of course this new MX5 RF is no different, with around and extra 50kgs overall. Despite this I can’t say I noticed much through the corners and if anywhere you’d probably notice the difference most acutely out on track.

On the looks front, I think the MX5 RF is definitely a step above the soft-top, a view that seems slightly controversial as many seem to vehemently disagree with me. The lines this car strikes, particularly with the roof down, are rather excellent though in my opinion and couple that with the overall more aggressive nature to the ND generation and you get a rather handsome vehicle.

What about the driving experience?

Quite frankly I think it’s sublime as it pulls off that difficult trick of being great fun everywhere. Sure the MX5 rolls more through corners than say a Toyota 86, but to me there are two advantages to this. Firstly, through twisty roads you can really feel what’s going on beneath you as the MX5 conveys the weight transfer, making the drive just that more exciting from the moment you decide to give it the beans. Secondly it makes the car more bearable on a daily basis. I don’t know about you, but my drive to work if full of potholes, uneven roads and all manner of things to get in the way of my driving enjoyment. The supple suspension of the Mazda MX5 RF irons a huge amount of this out and quite frankly makes the prospect of commuting to and from work just that more pleasurable.

Key to much of the driving experience is found from behind the wheel, specifically your seating position and the driving tools put in front of you. This was always a weakness of the NC generation and while not terrible, it was never perfect. This new ND generation of Mazda MX5 is much better, although I found headroom to be a factor in the RF compared to the soft-top, something you’ll no doubt need to take into consideration should you be on the taller side. The steering wheel is great though and once put between your hands, is difficult to force yourself to ever let go.

At the end of the day, is the Mazda MX5 RF worthwhile?

Well I think quite cleverly Mazda has recognised two distinct markets of MX5 customer and hence we have both the RF and soft-top, two cars that while almost identical, each have their own niche. The looks of the MX5 RF will attract some without a doubt while scaring the track day goers away with the added weight, but at the end of the day that’s no bad thing as now both groups can experience those Miata thrills.

What does concern is the price, as with the RF only coming in automatic guise to South Africa the price difference between the two different models is close to R90,000 and I’m not sure I can justify that in my mind. If the manual soft-top didn’t exist I’d probably be singing the RF’s praises, unfortunately the looks for me don’t justify the smiles per Rand. We’re often toughest on those we love and while there were many excellent qualities to the MX5 RF, I’d say go get yourself into the soft-top and never look back with a massive smile on your face.