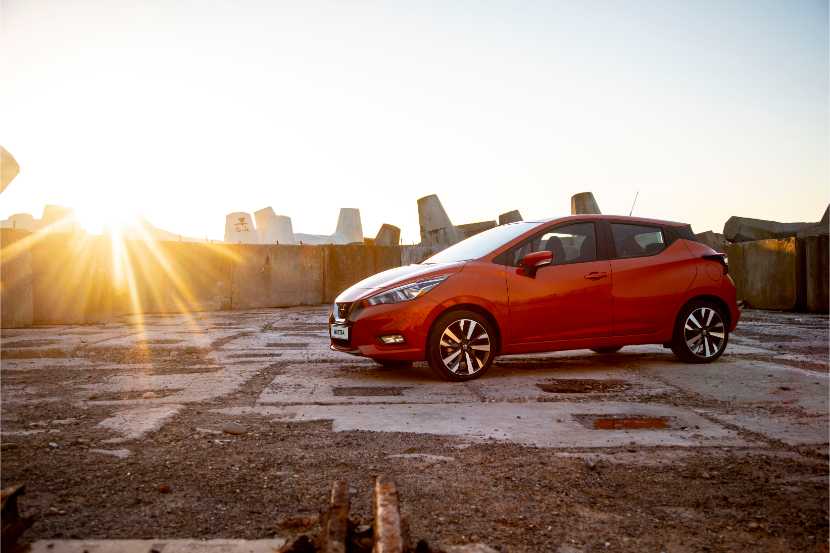 There are some vehicles that have a stigma attached to them. The Nissan Micra is one such vehicle. It’s not been a looker for a long time now and at best it could appeal to the cute city car market. That’s the problem really, it’s difficult to come off as quirky and cool. Much easier to slip into weird and whacky. So you’ll forgive me for having slight trepidations upon receiving the call to take delivery of the new Micra.

I didn’t know what to expect. Having not planned to have the vehicle I didn’t even know what it looked like until I stepped out of reception to sign the delivery papers. And wouldn’t you know it, I was exceptionally surprised. Such a makeover the Micra has undergone I’m surprised Nissan isn’t using it to sponsor reality TV shows. A bang up to date look goes a long way to impress, but it was also the size that caught my eye. My recollections of the previous Micra were that of a clown car whenever you attempted to get four adults inside. These days the Micra is all grown up and clearly living a responsible adult lifestyle, and I like it.

Don’t be fooled by bigger though, this new Micra can still zoot around town with the best of the city cars, all thanks to the 1 litre turbo charged petrol motor under the hood. Despite having great power and a wonderful manual gearbox, I did find the engine somewhat unrefined, reminding me of the early Ford Ecosport engines where the choice was all of the power or none of it depending on where you are in the rev range. And while having hill hold is exceptionally useful, the clutch feels very like a marshmallow and it’s often difficult to gauge the exact bite point while releasing.

But honestly apart from those few minor issues I have very little bad to say about the Micra. It’s got a large body yes, yet they’ve managed to keep the weight down somehow. This leads to amazing fuel economy, where I was finding around down 6.5 litres per 100 very achievable and on the open roads numbers in the lows 5s were to be expected. Fold those seats down at the back and you’ve suddenly got mountains of space to transport your earthly possessions. I can’t think of another small hatchback that can fit a mountain bike in the back with only the front wheel removed. Usually you’re looking at bakkies or station wagons for that kind of practicality.

The elephant in the room is unfortunately the price. With the top of the range coming in around R300,000 I’m not sure how many consumers are going to be rushing out to splash that kind of cash for a Micra. Which is a shame as this is really an excellent product and one that I can highly recommend. Small touches like an easy to connect Bluetooth system shows just how much thought Nissan has put into the new Micra and I really hope it pays off for them. Not many vehicles leave a lasting impression and even fewer genuinely surprise me. The Nissan Micra certainly did both of those things, I have to admit I was somewhat sad to give the keys back. Stigma? What Stigma?