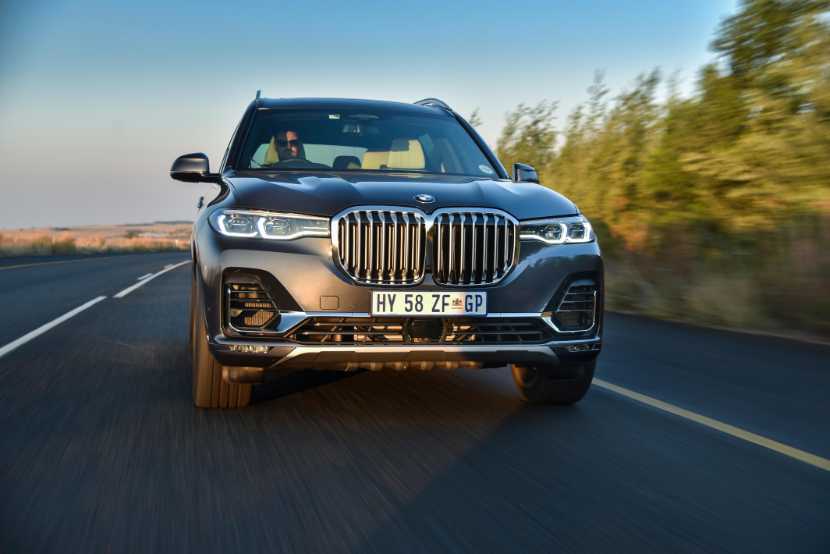 50% of the world’s supply of BMW X7’s will be going to North America. That’s an awful lot, but looking at the dimensions of this monster SUV it all makes sense. The Americans love a big car, just look at the Toyota Tacoma, a bakkie about the size of our Hilux, yet it’s the smallest bakkie available to them. But how does the BMW X7 stack up? To start with the X7 is billed as being part of BMW’s luxury line, along with the i8, 7 and 8 series. Strange, as I’d have considered the 8 series more of a grand tourer and the i8 more of a sports car than out-and-out luxury vehicles. Nevertheless, as the 4th, newest and top dog entry in the BMW X range you can understand why BMW needs to distinguish the X7 away from the other models and in particular the X5, the now previous flagship SUV.

Read the press release however, and you get the sense the BMW marketing team have been living in a haze of designer drugs, locked away in a secret location and hidden from society in order to produce the most fanciful of statements about the X7. Feast your eyes on the exterior for a while and really take it all in. Now try marry what you see with; “A new use of forms, dominated by clearly structured surfaces and precise lines, lends the BMW X7 its modern and progressive aura” and “the X7 displays harmonious proportions”. If you’re like me and live in the real world you can only describe the X7 as a brute, a bruiser or a behemoth and it’s easy to see why. At 2m wide and just over 5.1m long it’s not only the widest SUV available right now, but the longest too. Some will of course argue that it gives the BMW X7 incredible road presence and safety confidence to those inside, however in parking lots and even on your standard road the car is so large that you often feel somewhat restricted and fearful for your wing mirrors.

Seven seats as standard is exceptionally nice though. I’d expect it in a vehicle of this size, but at the same time that versatility is so often missing in a family vehicle and it’s really refreshing to have another option available in the market considering how few there are. Very welcome too are the life luxuries liberally mixed into the package, with highlights being the electrically operated split folding tailgate and folding rear seats operated from buttons on both sides of the vehicle. The radar guided cruise control, coupled with lane keep assist is now at an impressively refined stage, getting about as close as you can get to be autonomous without being completely so.

With all of these driver assists on the go you have plenty of time to sit back, relax and soak in the atmosphere. As expected the BMW X7 has swathes of stitched leather everywhere, with big comfortable seats and digital everything. The driver’s heads up display is also of a particularly high quality now and is so good we’re almost at the stage where the projection is entirely imperceptible. I’ve got to say that this new BMW system has to be one of the best out there. Also, unless my eyes deceive me it’s bigger and contains more information than I’ve seen before. It all makes for a very relaxing and pleasant place to be for passengers, but particularly for the driver.

On the road the BMW X7 is exceptionally refined. Big and cumbersome around parking lots it may be, but on the open road the comfort and ease with which is eats up the miles is very impressive. Cocooned inside the cabin almost all of the outside environment has been shut off, giving the occupants a relaxing experience as the countryside whizzes past. Currently available in xDrive30d and M50d variants, priced from R1,554,500 and R1,853,200 respectively with a M50i variant arriving October 2019 you’re not going to be short of power under the hood. The BMW X7 is unsurprisingly heavy though, hitting the 2.4 ton mark so you’ll need all that power and torque. Having driven both available derivatives, I can confidently say the M50d is the one you want. The xDrive30d is by no means a slouch, but with such a huge frame to lug around you’re not going to have your hair blown back.

At the end of the day the BMW X7 is exceptionally refined, very comfortable and quite an impressive SUV for the segment. I do think it has one major weakness though, the BMW X5 M50d. Around R400,000 cheaper than the equivalent X7, nimbler, easier to park, equipped with virtually all the same tech and available in a 7 seat variant, it presents serious competition to the bigger brother. However, interesting options such as the 6 seat configuration and the extra refinement certainly means the BMW X7 does have a niche appeal and as our allocation won’t be that high, is going to be somewhat of a rare commodity too.