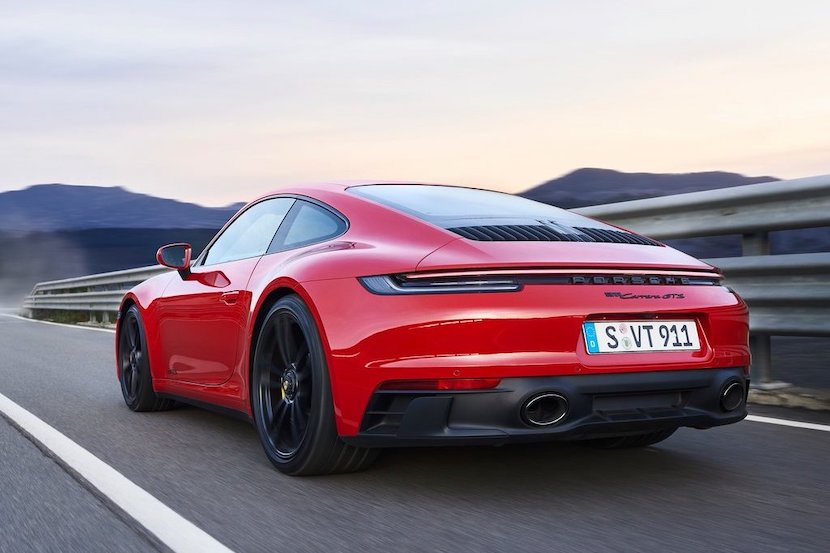 The previous generation Porsche 911 GTS was my absolute favourite of the whole range. While it didn’t carry the same historical provenance associated with a numbered 911 GT car, the GTS stood quite comfortably on its four wheels and held itself high. I loved the accessibility it provided the driver. I loved the ease with which you could use one on a daily basis, yet have just as much fun on a Sunday blast around the countryside. I also loved the understated nature of the vehicle in comparison to its bigger brothers and the usability of performance behind it. The most surprising thing for me, however, was how I didn’t mind that the one I drove was all-wheel drive. The configuration just seemed to suit the vehicle perfectly and it all came together in one of those eureka moments that made sense at the time.

Now we’ve got the brand-new 992 Porsche 911 GTS and unsurprisingly, there are some pretty big shoes to fill. No one knows how to fill a set of boots quite like Porsche does though. If anyone is up for the task, Porsche is. As before, the new GTS fits neatly in the middle of the 911 range with 353 kW and 570 Nm of torque, just a little more than the Carrera S. Of course, this all emanates just behind the driver in a wonderful note that only a 911 can make with its flat six-cylinder biturbo engine. While there is a no-extra-cost manual option, both the two-wheel and all-wheel drive versions we drove had the PDK gearbox specified and neither had the coupé-only light-weight package that saves 25kg by shaving the glass, removing the rear seats, adding carbon-fibre front seats and fitting a smaller battery.

For me, the ride has always been one of the 911’s party pieces, particularly in the Carrera models. Supple and communicative is hard to pull off, yet it has always made the 911 such an attractive proposition and the reason why it’s such a usable sports car. The old GTS fell on the Carrera side of the spectrum, favouring a supple and comfortable ride over a ‘sportier’ one. It was a balance that I felt really suited the car and appreciated. That has changed for the 992 GTS, though. Whether this is a good or a bad thing will depend entirely on your personal preferences. Those customers looking for something harder and erring on the GT3 side of the fence will be delighted, whereas those keen on a Carrera S with just a bit more poke will probably feel Porsche has gone a bit too far.

What I did find, though, is because of this, I was encouraged to drive the car in Normal mode more often than not. Now, before you start thinking I’ve gone completely soft, Normal mode is so rewarding for the driver, I’m tempted to say it’s a pity the car comes with anything more. Ninety-nine percent of the time, the car adapted to suit my needs almost telepathically. And this is all borne directly from that sublime engine that is just so versatile, it gives the driver everything they could ever want. Feel like wafting past people on the highway on a wave of torque that slides you up the speedometer so fast you’ll think there’s something wrong with your eyes? You’re covered. Feel like screaming past with your hair on fire propelled by a tsunami of sound? Got you sorted. And it does this all in Normal mode. Going into Sport or Sport Plus modes backs off the traction control, turns on the load exhaust and stiffens the suspension … but it also means you’re permanently in burning-hair tsunami mode.

The interior is everything you’ve come to expect from Porsche and the 911. Constantly evolving with myriad luxury tweaks; the joy of any 911 is just how much sense it all makes. Intuitive is the name of the game combined with sublime quality. Everything is exceptionally well put together and this is evident if you let your hands roam around the cabin. So often, a vehicle feels like a quality product only in areas you’re likely to touch regularly but with the 911, this applies everywhere. Digital dashboards are the way of the future and it’s going to be a long time before this latest incarnation shows its age. My favourite touches are the analogue clock and, more importantly, analogue rev counter. It stands out as a wonderfully classy throwback to what is quickly becoming a bygone age. It’s like spotting an exquisitely crafted watch among the sea of modern fitness trackers that dominate people’s wrists.

The Porsche 911 GTS does come in two distinctive flavours: traditional two-wheel drive and space-age all-wheel drive. Choosing between the two will come down to preference and location. Anyone having to regularly contend with hazardous conditions like snow and ice will very likely find the all-wheel drive appealing and for good reason. Not only do you get the security when conditions get rough, but the system is so well optimised now that you will honestly be hard-pressed to tell the vehicle is driven by all four wheels. Through the corners, it’s level and responsive with that typical 911 squat coming out on power. I would say with confidence that you’re not going to notice any all-wheel-drive understeer on-road. Although, the track may be a different story. The traditional two-wheel-drive variant would be my choice. Not only do you save 50kg, but it’s so composed and inspires so much confidence, I never felt like I needed the power going to the front wheels anyway.

Versatility is the key that unlocks the magic of a truly great Porsche 911 GTS. More than any other 911 it’s for the person who doesn’t want to compromise, who wants to have their cake and eat it. The kind of design brief that must make engineers want to run a mile. Yet, once again, Porsche has produced something truly spectacular and I fully expect demand to way outstrip supply. Would I have toned down the ride a touch? Yes, but I’m sure you’ll find many others rejoicing that this variant has flexed its sporty muscles. With prices starting at the R2,290,000 mark, it represents real value in its segment.