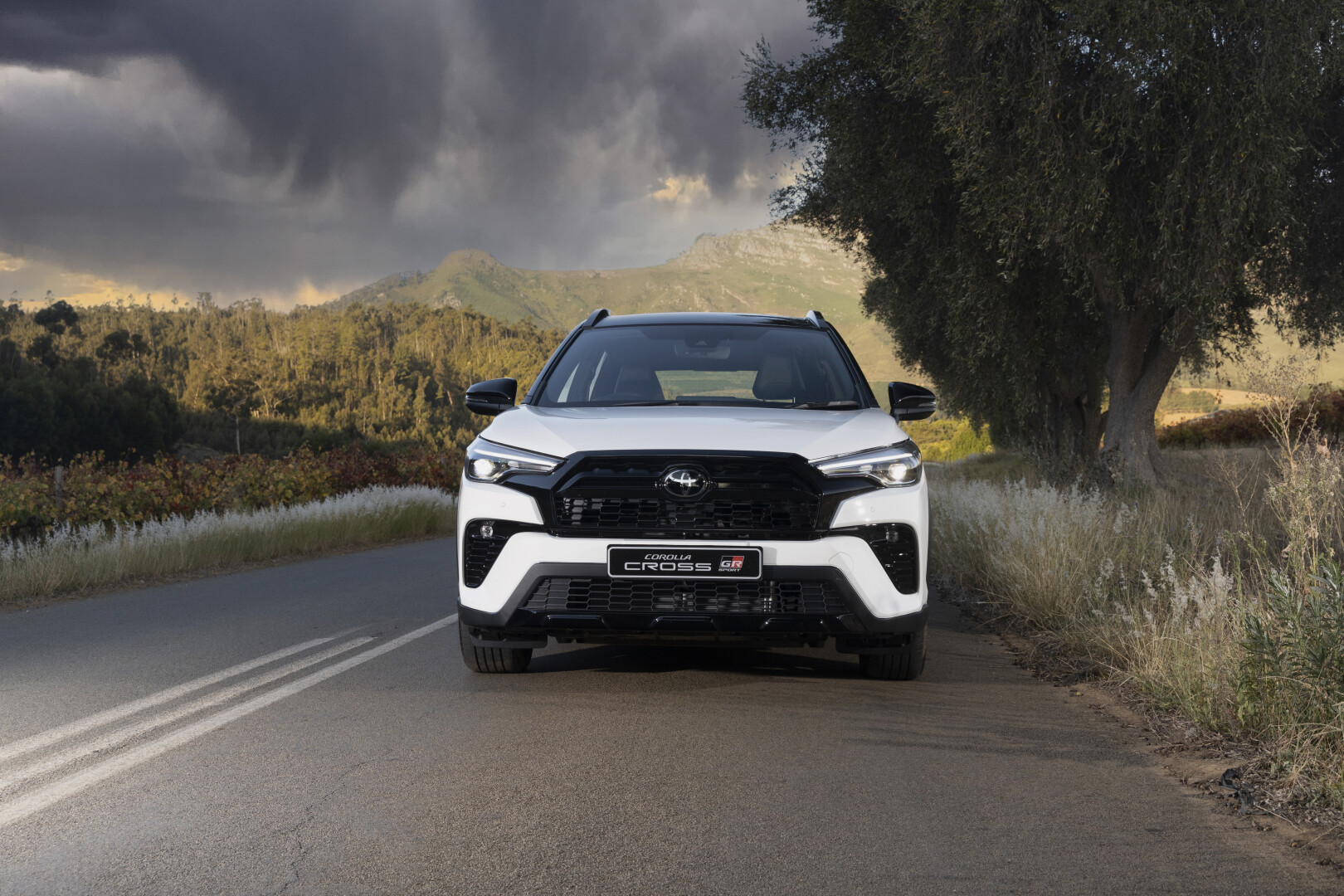 The Toyota Corolla Cross is something of a phenom in local terms – had it not been for the factory destruction in Durban, post Covid supply and logistics constraints I think we would already see one in every family lucky enough to be able to afford a new car.

Toyota has stepped it up a gear now, with the GR Sport (which is designation for Gazoo Racing, Toyota’s motorsport division). Don’t get too excited at the prospect of 500 horsepowers and drifting modes just yet however because within GR there are levels of added excitement. Pace yourself.

You get GR Sport which is this version and basically entails a suspension upgrade. From there you go to GR which adds power, and the top of the pyramid is the hard core GR MN package which adds more power again.

I don’t think the Cross as a model lends itself to drifting and 500 horsepowers to begin with but then again I never thought I’d see a Volvo V70 in touring car championship regalia either so I suppose anything is possible. However, common sense, something in abundance at Toyota of course has prevailed and the GR-S(port) is the first iteration on the process.

What do you get? You get a Cross Xi (the top of the range flavour) with newly tuned suspension featuring new front and rear shock absorbers and coil springs. Same engine at 103kW and 172Nm, same CVT gear box and ergo same claimed fuel consumption of around 6.8l/100.

The looks are improved, substantially in my humble opinion by the use of black things everywhere. Roof rails, outside mirrors,  front grille, front lower grille, tailgate, spoiler, and rear diffuser for a start.

18” alloys are included in, wait for it, black. But the badge at least is black and red. And Toyota have not gone to town in the interior either, reducing the effects to a quite neat looking red trim on the instrument panel and subtle seat stitching. It’s an attractive look.

I haven’t yet had the Cross for a road test but first impressions on the GR Sport launch were of a firmer ride but without a comfort sacrifice that I noticed. Handling is predictable, safe and whilst this is not a sports coupe it gets around the corners in town with Toyota type efficiency. I can’t comment on fuel consumption but being the same motor as in current Cross I’d think Toyota’s claim of 6.8l/100 is going to be pretty close to the mark on the combined cycle.

At this pricing point the usual toys abound – there is a surprising large number of them too. Your biggest problem with the car in your test drive is going to be the ‘hurry up and wait’ factor whilst Toyota recalibrate and adjust to the demand levels. Given what they’ve gone through at the KZN based plant, their ability to be as far along in the recovery cycle as they are is commendable.

The Cross has been a rock solid on point offering from inception. Nothing has changed other than this version is a good looking, upgraded variant based on an already big time winning platform. Is it possible to get it wrong? I really cannot see how and if the top of the range Xi was already on your radar, surely, surely the GR-Sport has to come into the picture. Without question.