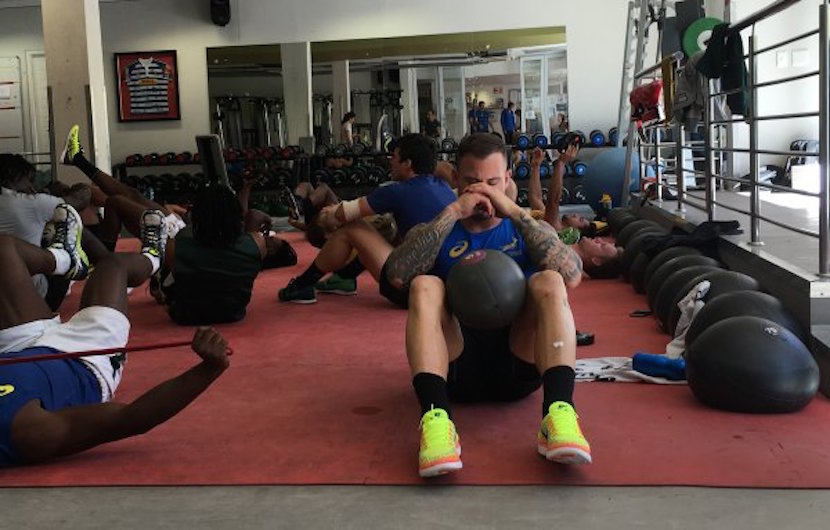 With two tournaments left in the World Rugby HSBC Sevens Series, South Africa’s Blitzbokke are in second place, 8 points behind Fiji and 4 points ahead of New Zealand. The South Africans have won only one tournament – in Cape Town – but have been losing finalists twice and losing semifinalists four times. If they’re to clinch the series title, they’ll surely have to win or at least reach the finals of both the remaining Paris and London tournaments and hope that the Fijians and All Blacks perform below par. Coach Neil Powell has drafted some new blood into his squad for the Paris tournament, and might have an eye on the upcoming Rio Olympics as he fine-tunes the team. – David O’Sullivan

Cape Town – Springbok Sevens coach Neil Powell is confident that the four changes made to his side for the upcoming HSBC Paris tournament will help the team achieve the goals set for this tournament in the French capital and the remainder of the HSBC World Rugby Sevens series.

Francois Hougaard, Rosko Specman, Philip Snyman and Dylan Sage are the new faces in the squad from the last tournament in Singapore, with Snyman also taking the captaincy role over from Kyle Brown.

The Blitzboks departed South Africa for Paris on Sunday evening and Powell feels his team will give good account of themselves, providing they stick to the processes and structures in place.

“We are looking to possibly rotate the team after Paris for the London event, but for now we only look at next week. I am happy with the team we selected for the Paris leg,” Powell said.

“We have a strong pool in Paris playing England, Australia and Brazil and that is good for us, as this is something we will probably encounter in Rio in a couple of months. We will try to keep our focus on our structures and processes and not the results as such. If we stick to what we do well, the results will come.”

Snyman is not expecting the extra responsibility of captain the side will pose any problems.

“Taking the role of captaincy for Kyle is a nice challenge. We work well together, so I am looking forward to the added responsibility. We have to focus on Paris for now. Game one against England is the big focus. We know what we do best and will back our structures. That will bring results, I believe.”

Hougaard, who returns to the squad following a stint with Worcester Warriors, said he is keen to get back into the sevens mode.

“I have a great time in Worcester, but it is great to be back with the sevens family. We worked hard this week to prepare for Paris and that was great. We are not looking too far ahead, as it can result in us missing the immediate goals. We take it week for week and prepared well with the Paris Sevens in mind. It is not as easy to get back in sevens as it looks like, it takes time, but I worked hard this week.”

Springbok Sevens speedster, Seabelo Senatla, who has scored 54 tries in the series, said the team’s focus is solely on what awaits them in France.

“The Olympics are getting closer, but we are not focussing on that yet. All our energy and focus is on the next two tournaments. The management did well in keeping the guys fresh at the start of every tournament cycle. The guys are keen and hungry for the last two tournaments.”

The Springbok Sevens team (with number of tournament caps) is: