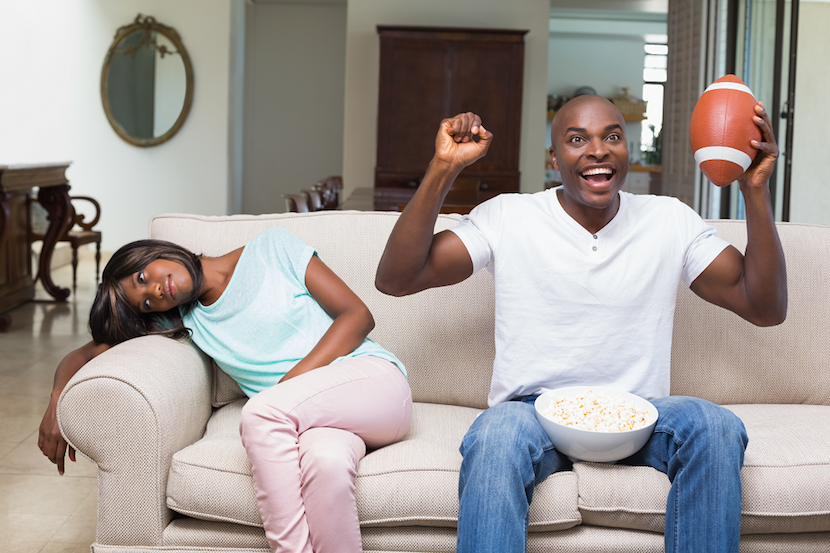 It’s peak rugby season. All across South Africa, ardent rugby fans are huddled around the glow of their TV screens, anxiously calculating the bafflements of the Super Rugby points system, and seeing their therapists weekly to cope with the disappointment of their SuperBru rating.

And me? Well at the mention of rugby, I’m likely to be found in a corner somewhere, preferably under a blankie, in the foetal position, gently rocking and humming. Simply put, I’m not a fan.

And this would be okay. If it were just me, I could never turn on the TV and avoid all pubs and restaurants that might be screening the game. But for just over two decades I was married to someone who was something of an aficionado. And then he started working at one of the rugby unions – so for a long time, rugby was a very big part of my life.

It was clear I was going to have to develop some strategies to cope. And because I am a good and generous person, I am going to share them with you. Because I feel sure I cannot be the only person in South Africa who has rugby inflicted upon them for one reason or another, and I want to spare you as much pain as possible.

First prize is not to go to people’s home to watch the game, of course. This will require some planning on your part. Find a friend who can decipher the fixtures. Sit down with them and ask them to identify the crucial games in the tournament – you know, Lions vs. Bulls, for example, or South Africa vs. Australia.

Write down the dates and times and plan your social calendar accordingly. Go to the theatre, watch terrible movies, and visit your Great Aunt Mabel even though the hairy mole on her chin freaks you out. Keep your eyes on the prize – no rugby!

If you do manage to be conned into a braai at someone’s house while the rugby is on, though, you’re going to have to step up your game. Start by scoping out who the fans in the room are so you can slag off the right team without being punched. Then release your inner troll.

There is always fodder for smart comments on a rugby field. Just the hairdos can keep you in snark for the length of the game. And don’t forget the commentators – they are past masters at talking for 90 minutes and saying something of value for about 90 seconds total. If you do your job right, your friends won’t invite you the next time.

And if they tell you to shut up, simply whip out your phone and tweet your rugby trolling. I did this for years using the hashtag #rugbyignoramus – it saved my sanity on many a Saturday evening.

If that doesn’t work, well, you can always drink. I’m not one to advocate binge drinking – I barely drink unless, of course, I have to watch rugby, so I can confirm that it makes those 90 minutes fly by.

Look, you can try, but at some point, you will probably end up in a rugby stadium. Your friends will cajole you. They’ll tell you it’s more fun at the park than it is on television. They’ll assure you that you’ll be caught up in the spirit once you’re there. It’s a trap, I tell you.

What you will experience is the bone-crunching sounds of bodies running into you, beer-swilling thugs shouting abuse over your head, and freezing your butt off on a wooden bench. You may be forced to listen to Kaptein (yes, still – the playlist at stadiums hasn’t changed in decades). And then there are always the vocal stylings of a self-appointed stadium MC, who has a doctorate in inanity and should never have been allowed within 10 metres of a PA system.

Also, the rugby will always happen on the opposite side of the field to where you’re sitting anyway (thankfully), so if you do try to watch, you’ll have to do so on the big screen or you’ll never catch sight of the ball.

Essentially, your job is just to get through the couple of hours you’ll be there, preferably alive. To achieve the latter, there are two rules you need to abide by. One, don’t heckle anyone with a mullet (especially at Loftus), and two, be wary of the women. Female rugby supporters are just plain scary and they have a vocabulary that would make a room full of journalists and sailors blanch. If you cross them, they will moer you. Guaranteed.

Ordinarily, when faced with a long wait, I’d take a book along, but this is not a milieu in which your copy of War and Peace is likely to be appreciated. Fear not! You can still use the time productively. No-one will suspect a thing if you’re on your phone, so use the time to delete your exes’ contact numbers and block that annoying friend from school who keeps WhatsApping you motivational quotes.

Dress warmly – it will be colder than you expect. And take snacks. Lots of snacks. You might as well eat yourself into a coma when you’ve finished cleaning up your phone, and stadium snacks are so overpriced they make the popcorn at the movies look cheap.

If you still have time on your hands towards the end of the game, there’s great fun to be had in watching inebriated spectators lurch up and down the stairs. The only way to improve that spectacle would be to stick out a well-timed foot… but of course I’m not suggesting that you do that.

Top tip – don’t drive to the stadium. Use a park and ride, or Uber there. Not only will it save you the hassle of trying to find somewhere to park in the streets around the stadium, which are always littered with drunken louts, but it’ll mean that if all else fails, you can safely – you’ve guessed it – drink!