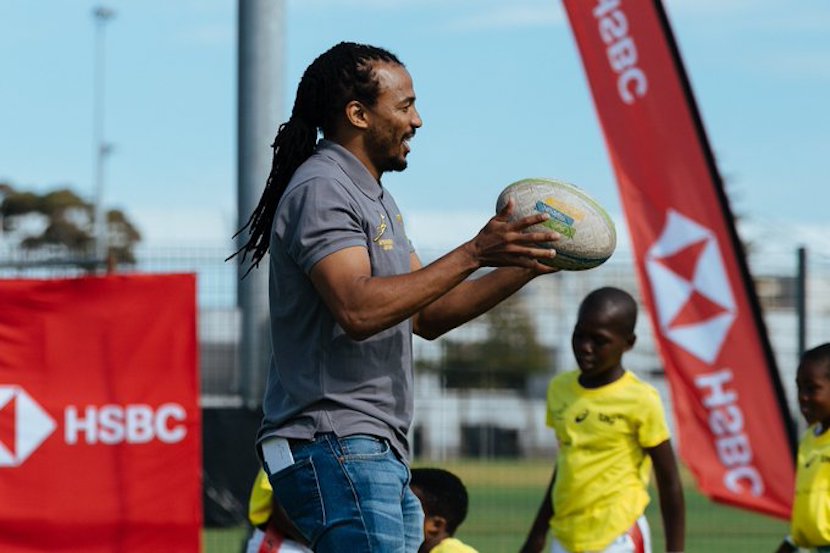 On YouTube, there are many highlights of Blitzbok Cecil Afrika’s career. They come with descriptions like “wonder try” or “incredible solo try”, because that was Afrika’s trademark – scoring tries that defied belief. In most of the examples, Afrika scores a try from a position where it seems impossible to emerge successful. Afrika had that rare ability to look up and, within a split second, size up his options, know exactly where his closest teammates and opponents were, and chose the right option. His decisions were often audacious, opting to kick when it seemed better to run, or run when it seemed better to pass. His kicks over the heads of his opponents were pin-point, his turn of speed was breath-taking. He was the consummate team player, never hogging the ball and trying to score when a teammate had the better chance. Above all, he was humble and an all-round nice guy. His list of achievements and accolades is long and while his records will inevitably be broken, it will take an exceptional player to do that. Afrika ends his international career at the right time. In the lightning-fast world of Sevens Rugby, age takes its toll and Afrika has been at the height of his powers for 12 years. If there is one thing that has evaded him, it is an Olympic Gold medal, and he’s keeping his options open to play one last glorious tournament if the coach will have him. So Cecil Afrika says goodbye to international sevens rugby having established himself as one of the greats of the game, but not quite farewell. Not as long as a gold medal in Tokyo in 2021 is still in the offing. – David O’Sullivan

The most celebrated Springbok Sevens player of his generation, Cecil Afrika, has ended his official Blitzboks journey after 12 seasons of highlights and achievements, but hasn’t quite given up on his Olympic dream.

Unless called upon, South Africa’s highest points’ scorer will not don the Blitzbok colours again after a mutual agreement between the player and Springbok Sevens management.

Afrika’s national contract will run its course at the end of July and with no international matches or tournaments scheduled in that time, it means that the former World Rugby Sevens Player of the Year (2011) will bow out after 345 HSBC World Rugby Sevens Series matches and a points’ tally of 1462.

Afrika, who made his debut in Dubai in 2009, played in his final and 66th tournament for his country in Vancouver in March this year. He was part of two World Series-winning Blitzbok squads (2017 and 2018), as well as the South African team that won Commonwealth Games gold (2014) and Olympic bronze (2016) medals.

“It is one of those inevitable things in professional sport, but even so, it remains a sad day to say goodbye to Cecil when his contract expires,” said Powell.

“He has been a great in the game, his achievements speak for itself and he inspired many to enjoy the game of sevens.

“I played with Cecil when he made his debut in 2009 and in the last couple of years, had the privilege of coaching him as well. He was a truly gifted player who came back from some serious injuries more than once to achieve amazing feats as a player and squad member.

“We will say goodbye to him in a more formal way later in the year, but for now the Springbok Sevens management would like to thank him for his contributions over the many years he has been with the Blitzboks.

“Cecil has set very high standards for those to follow and there is no doubt that he will leave the jersey in a better place, something every international rugby player strives for.”

Powell said that they agreed a year ago already that Afrika will make his swansong in 2020: “We extended his contract last year in order for him to have a shot at making the Olympic squad, but with that being postponed to next year, that option cruelly fell away and is not available anymore.

“We have proper post career guidance in place for all in the squad and I know Cecil is already dipping into the business world, where he will be successful, no doubt.”

Afrika said he understands that retirement is part of professional sport, but he will be available if the team needs him.

‘’Beyond contractual agreements, as a professional athlete, one is always aware of the fact that the time will come that you either stop playing for a team or when retire, and in this instance it only means that I will not be with the Blitzboks,” Afrika said.

“Being part of the Springbok Sevens has been a truly and incredible time of my career and the Blitzboks will forever be family and home.

“I cannot go without saying a massive thank you to the supporters. I always appreciate their unrelenting and continued support, encouragement and the part they play in making this sport as spectacular as it is. Hopefully they will continue to support me wherever I go.”

Afrika is not quite letting go of his dream to make it to next year’s Olympics though, and is still keen to lace up his rugby boots.

“The Covid-19 pandemic we are currently facing is definitely not something anyone wished for and was certainly not expected, and as much as it has re-arranged and possibly unsettled my Olympic 2020 chances, it is a dream deferred and not cancelled,” he said.

“As management has mentioned, the possibility remains should the opportunity to play in the 2021 Olympics present itself. I am always ready to play should the Blitzboks need me.

“Aside from keeping-up my professional fitness to stay prepared for opportunities that may avail themselves, I also plan to be more involved in skills training within rugby and overall sports development initiatives.

“I believe I can definitely add value from my experience and I would love to be a part of that, not only as a player on the field, but also on the other side of the white lines, as I have rather a great passion for contributing to the components related to the game in other forms such as analysis and coaching.

“Presently, I am also using some time to partake in relief projects for those affected by the Covid-19 pandemic as I believe that this is one of the most important aspects in our lives at the moment and requires all hands-on deck, the government cannot do it alone.

“As a professional athlete my value doesn’t and shouldn’t only come from what I am able to do on the field, but as a person too.”

Afrika is also involved in a small business with two of his former teammates, Kyle Brown and Philip Snyman, with the establishment of the Eighteen Coffee brand, one of their first ventures.

“I am enjoying growing Eighteen Coffee and we’re excited to see what the future holds for our business,” Afrika said.

“I am excited for the next chapter, for all the ways in which I am aware of and also for the opportunities that have yet to unfold both in and outside of rugby.”