In 1998, when the late Imperial Holdings CEO Bill Lynch used R15m of the group’s money to establish the Ukhamba Trust, he was probably following his own credo of “Just do it.” Fifteen years on, the magic has happened.

By any measure, Ukhamba is one of the most successful Black Economic Empowerment schemes. With over 15 000 individual and 10 schools as beneficiaries, it’s truly broad-based. And since 15 November, the owners have been able to trade their slice through an active secondary market.

Data provided by Equity Express which operates the OTC market where 19.9m Ukhamba A shares are listed, shows that in the month and a half since listing, almost R100m worth of the shares have been traded.

As often happens until new markets settle down, the Ukhamba A shares are changing hands at a substantial discount to their underlying value.

The structure is complex. Only half of Ukhamba’s major asset – its 10.1% ownership of the Imperial Holdings – is actually owned by the Trust. The rest will be transferred in equal tranches over the next dozen years. So working out a realistic value for the shares being traded on the OTC introduces estimates of future Imperial share price movements and the usual discounts of holdings which cannot themselves be traded.

KPMG did its best to provide a conservative number. It excluded any discount for the share lock-ins and the fact that they can only be sold to other Black people and came to a value of R39 for each Ukhamba A share.

Since listing, the stock has only traded briefly at that elevated level. It has settled at around R23 – at which level long-term investors (who have to be Black) are able to invest at a 41% discount. With that kind of advantage available, any Black person who likes the look of Imperial as a long term investment has a massive incentive to buy via Ukhamba. Although they will have to wait until 2025, their normal returns will be enhanced by this guaranteed discount that will eventually disappear. 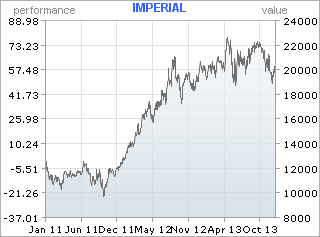 Back to the Ukhamba story, that initial R15m seed capital created a Trust that invested in and ran its own businesses, and served as a channel for additional savings from Imperial’s Black employees.

Within five years, 2 200 of the Imperial Holdings Black staff had invested a further R7.6m through buying Ukhamba units. The Trust’s investment flourished – businesses it owned created 1 000 new jobs and were generated R7.4m annually in after tax profit. The units had appreciated from R50 to R160.

In 2003, Ukhamba was broadened to include all of Imperial Holdings’ then 14 200 HDI employees as part-owners (now 15 575), holding 47.1% of the Trust. Ten schools were also introduced as the owners of a further 6% with Imperial itself retaining the balance of 46.9%.

The transaction was complex and included a base profit level which grew at 13% a year, but the bottom line was the eventually transfer of 10.1% of Imperial Holdings’ equity to Ukhamba. That process will be fulfilled in 2025.

Ukhamba now owns 10.898m unencumbered Imperial Holdings shares (worth R2.2bn at the current share price). At the end of June for the next dozen years, a further 831 469 Imperial shares – currently worth R167m – will be transferred annually into the Trust.

Last month, I had a long-postponed lunch with Lynch’s successor Hubert Brody. Our discussion was wide ranging, including his family’s relocation to Stellenbosch, why at 49 he decided to step down – to be home while his kids grow up – and his belief that Imperial is superbly positioned for the future.

One of the things Brody is most proud of, though, is the way Ukhamba has worked out. He deserves to be. Imperial Holdings has succeeded, spectacularly, where so many other companies have blundered.