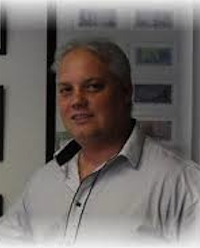 If you have ever travelled along a road that meanders alongside a river, you will find that occasionally the road must divert away from the river, perhaps because of the terrain. However, eventually the road reverts back to its position parallel to the river. We can speak of the road and the river as having a correlated relationship.

Very often we find certain shares in the same sector that tend to behave in a similar manner, or have high levels of correlation. One such example is Old Mutual and Sanlam that have had a fairly close correlation if you use monthly, longer-term data. That would be expected considering that they South Africa’s two largest life insurers and also both hold interests in South Africa’s two largest short-term insurers. Some would argue that they are probably as correlated to the market in the long-term as they are to each other – and I would accept that. In the past 5 or 6 months the performance has had an extremely low correlation (see Table 1), with Old Mutual underperforming both Sanlam and the market.

Regardless of the fact that Sanlam has significantly outperformed Old Mutual since demutualisation in 1998, over the longer term they are fairly well-correlated, both with each other and with the market. This is why the recent divergence is interesting as a possible pair’s trade as there may be a reversion back to the long-term mean trend. It is therefore possible to make a profit going long Old Mutual and short Sanlam. However, to be sure of the trade, you need to understand some of the fundamentals that may have caused the current divergence as well as the outlook on both companies.

Firstly it helps to highlight the different strategies each company has employed that brings us to the point where Sanlam has significantly outperformed Old Mutual. Sanlam was more careful in it achieving its growth. Firstly, it spent many years developing their local operations and then attempted a slow and carefully considered expansion into emerging or growth markets, such as India and Malaysia. While it has some businesses in the UK which report into Sanlam Investments, the bulk of its international portfolio are ex-African Life assets, which Sanlam bought in 2005.

Old Mutual on the other hand was hasting in moving its head-office to London and then leaping into developed markets such as the US and UK. It overpaid for acquisitions that were unsuccessful and that were ultimately sold at large losses, consequently destroying shareholder wealth in the process.

Although both companies are trading on a similar PE ratio of 14 (always a good point of departure for a pairs trade), but they have been rated quite differently by the market in terms of group equity value or embedded value (GEV). Historically, the market has tended to rate insurance companies based on their discount to GEV. However, in recent years, instead of trading at a discount, Sanlam has in fact been trading at a significant premium to group embedded value (see Table 2).

At the present time, only Old Mutual and Liberty Holdings trade at discounts to their GEV, and it is my view that if the market turns bearish, the companies that are currently trading at premiums could see a rerating downwards. Sanlam trades at the highest premium to GEV of 51% and if we compare this to Old Mutuals discount to GEV of 10%, this supports my view that a long Sanlam, short Old Mutual trade could have a good payoff.

So may argue that there is good reason why Sanlam has outperformed Old Mutual and that it may continue to be a better performing company, so in order to address that, let’s consider current analysts’ views of the respective companies. 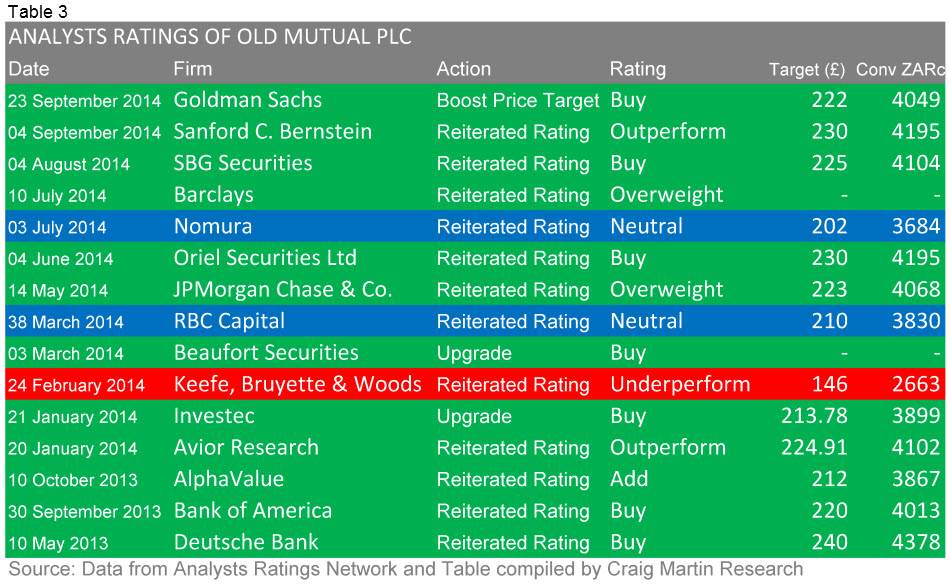 After Old Mutual clarified that it will be selling 18,3% of its US asset management business, Goldman Sachs maintained their buy rating on Old Mutual, but lifted their price target to 4049c (£ 222) per share. Old Mutual has a consensus rating of Buy and a consensus price target of 3890c (£213.22) (see Table 3). On the other hand, the consensus forecast amongst 9 polled investment analysts covering Sanlam Limited deteriorated from a Buy to a Hold position, with one analyst recommending a Sell. The fundamental analysis also seems to back up the idea that a long Old Mutual, short Sanlam trade could work out.

Sanlam (SLM) has received its short-term outperformance largely on the back of it holding excess capital, the anticipation of what the exciting emerging market acquisitions might deliver, and more recently, the incredible performance from Santam. However, most of that capital has been deployed and the results of those acquisitions in the emerging market space have begun to flow into the financials. Furthermore, I think it would be practically impossible to expect similar growth from Santam this year. In my view then, Sanlam, well a stellar company, is relatively expensive and the fair value is probably closer to 5420c.

Old Mutual offers the potential of some value unlock as it continues to exploit synergies between Nedbank and Mutual and Federal. Although it is currently trading at a 10% discount to its GEV of 205 pence (assuming an exchange rate R18.25 to Pound), it also needs to be noted that 67% of the group’s embedded value is directly related to investment markets. So up until this point, the performance of equity markets will be a primary driver of GEV.

Old Mutual is busy with an IPO of its US asset management business, which will release some of this equity exposure by delivering approximately R4,2 billion in cash. We think that Old Mutual will use this capital for strategic growth and it may be that the Board already has some ideas in place. So Old Mutual now becomes the new allocator of capital and we expect that a market re-rating may drive the share to at least 3900c a share.

Remember that when you do a pairs trade, you are paying commissions to enter and to exit the trade. If you use a leveraged instrument like a CFD, you are getting paid interest on the short, while you pay interest on the long. Theoretically, the costs should offset each other, although in practice the rate paid on a short is slightly lower than the long position. However, this strategy is market neutral. You will get paid on the Sanlam short, if the overall market falls, and paid on the Old Mutual long, if the overall market rises.