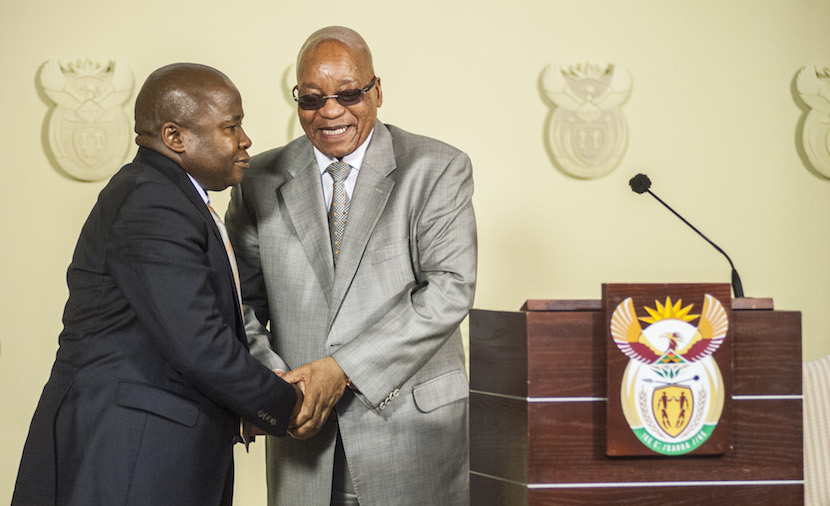 Explosive new allegations have emerged about the links between Des van Rooyen, dubbed the ‘weekend special’ after he was finance minister for only a few days, the Gupta family, Trillian Capital Partners – and ultimately President Jacob Zuma. The Sunday Times newspaper claims that Van Rooyen visited the Gupta family home daily before he was appointed finance minister in a fiasco referred to as Nenegate because Nhlanhla Nene was removed. The rand plummeted before Van Rooyen was swiftly replaced by a former finance minister, Pravin Gordhan. The newspaper allegations suggest that there may have been a big plan to access R400bn in state spending. The opposition Democratic Alliance has promised to report Van Rooyen for contravening legislation that prohibits government ministers from deliberately misleading Parliamentarians to the Public Protector. Van Rooyen has previously denied meeting the Gupta family shortly before his appointment. Last week the Sunday Times alleged that another politician was offered, and turned down, a staggering R600m in exchange for working in the interests of the Gupta family as a finance minister. The allegations have been strenuously denied by the Guptas. The sooner the allegations against Van Rooyen are tested in court, the better: if they are true, the full might of the law must come down on him and his accomplices. If they are not true, Van Rooyen, the Gupta family and everyone else involved in Nenegate will presumably be delighted to have their names cleared and their accusers placed in the spotlight. From a business perspective, the never-ending stream of allegations about state capture and corruption are not good for investor sentiment. – Jackie Cameron

This comes after an explosive Sunday Times report that Van Rooyen visited the Gupta compound at Saxonwold seven times before he was appointed as the finance minister by President Jacob Zuma for a weekend in December.

“In a reply to a DA Parliamentary question, Van Rooyen denied visiting the Guptas in the run-up to his disastrous appointment as finance minister. Yet, reports today indicate that he met with the Guptas at their residence not once but seven times,” the DA said.

In a written reply to the DA’s parliamentary Chief Whip John Steenhuisen’s question on whether he has met with the Gupta family or its employees since taking office, Van Rooyen said he had never met with the Guptas in their official capacity.

“Clearly he was misleading in his reply and in so doing he has contravened the executive ethics code,” the party said.

It added that the latest allegations demonstrate that the “minister is little more than a puppet whose strings are pulled to allow access to state funds for the benefit of Zuma and his cronies”.

Des Van Rooyen literally spent more days at the Gupta compound than he did as Minister of Finance pic.twitter.com/yqHrATBVbN

According to the Sunday Times, there is an email trail between Van Rooyen and a Gupta-linked company. The trail links Van Rooyen, his adviser Ian Whitley and Trillian Capital Partners CEO Eric Wood, indicating that Wood knew Zuma was going to fire Finance Minister Nhlanhla Nene two months in advance, by October 26.

The DA said it would be submitting parliamentary questions to Van Rooyen to determine if there have been any discussions with Eric Wood and Ian Whitely regarding the use of municipal assets to secure private debt financing for municipalities; the nature of his relationship with the Guptas and their known associates and if he met with the Guptas in the week prior to his appointment as finance minister.

Van Rooyen recently withdrew his interdict of the State Capture report after receiving an assurance from the Public Protector’s office that it made “no adverse findings” against him. – News24

In a reply to a DA Parliamentary question, Minister of Cooperative Governance and Traditional Affairs (CoGTA), Des van Rooyen, denied visiting the Gupta’s compound in Saxonwold in the run up to his disastrous appointment as Finance Minister.

Yet, reports today indicate that van Rooyen met with the Gupta’s at their residence not once but seven times.

Clearly he was misleading in his reply and in so doing he has contravened the Executive Ethics Code.

The DA will now report van Rooyen to the Public Protector, Adv Busisiwe Mkhwebane, for this violation of the act.

Details in today’s Sunday Times indicate that his appointment as Minister of CoGTA may have been part of a longer term plan to allow Gupta-linked companies to gain access to the more than R400 billion in municipal expenditure, and that van Rooyen’s subsequent appointment as Minister of COGTA was merely another way for them to achieve this outcome.

These latest allegations further demonstrate that the minister is little more than a puppet whose strings are pulled to allow access to state funds for the benefit of Zuma and his cronies.

The DA will also be submitting parliamentary questions to the Minister to determine: