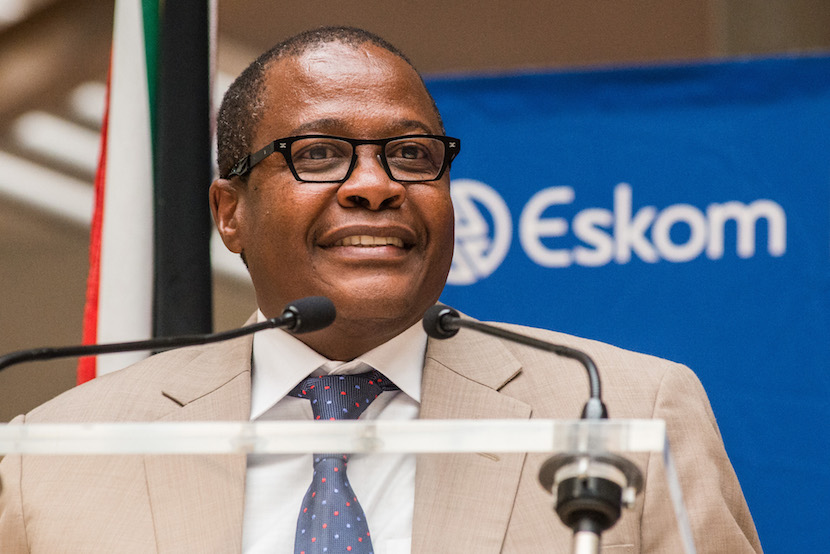 Eskom boss Brian Molefe, who has been the focus of ridicule after hinting and later denying that he was at a Saxonwold “shebeen” instead of the Gupta family compound has resigned as a result of the Public Protector’s #StateCaptureReport. Molefe is featured in the dossier, which details allegations of a politically connected clique taking control of state entities and enriching themselves at the expense of taxpayers. He is a central figure in deals involving utility giant Eskom. Molefe was also tipped to become finance minister, after incumbent Pravin Gordhan was pushed out of the way in an ugly political manoeuvre that included crime charges being pressed against Gordhan. Molefe was showing all the signs of stress following the release of the preliminary findings of the state capture report, breaking down in tears in a conference to discuss Eskom’s results. Meanwhile, President Jacob Zuma – a common denominator in recent scandals linked to state capture – this week survived a motion of no confidence in his leadership in Parliament. As Molefe considers his options, it seems inevitable that he will be pondering whether to turn state witness to share what he knows – particularly if he has been, as he claims, tarnished unfairly by the Public Protector’s preliminary report. Molefe has some work to do, though, with his Saxonwold shebeen dance showing that he can play fast and loose with facts. As Molefe says: The truth will out. – Jackie Cameron

On Wednesday 2 November 2016, a report entitled ‘State of Capture’ prepared by the former Public Protector, Advocate Thuli Madonsela, was released.

The report did not make any findings. Instead it made what were termed “observations”, based, (the report acknowledged), on an investigation not completed. It deferred a proper investigation to a commission of inquiry to be established at a future date. The outgoing Public Protector has directed the President – in whom the Constitution vests the power to appoint commissions of inquiry – to appoint one, and further directed the Chief Justice to designate a particular judge to head it.

It is a matter for regret that the report was prepared in haste to meet a deadline related to the Public Protector’s own departure from office. That her office continues, as all State offices do, and that any uncompleted function is completed by a successor in that office, was not a consideration in the report.

“Observations” made in the report relating to, inter alia, my conduct, are in material respects inaccurate, based on part-facts or simply unfounded. What the previous Public Protector has done is not herself to investigate to completion, or to allow her office to complete what she initiated too late to complete herself. She has also determined on recording “observations” without, in crucial respects, putting intended harmful disclosures to me first – as she was by law required to do. She has effectively deferred my constitutional right to be heard to a future date, and to a further body, which she has ordered others to assemble.

If such a body is indeed by law to be assembled, and carry out the task, it will not be for some time – as recent experience indicates.

In the meanwhile harm is done – to the institution it has been my honour to lead in the most difficult times, to its reputation and to my own. I say nothing of the harm, too, to others close to me.

I am confident that, when the time comes, I will be able to show that I have done nothing wrong and that my name will be cleared. I shall dedicate myself to showing that an injustice has been done by the precipitate delivery of ‘observations’, following an incomplete investigation, which the former Public Protector has drawn back from calling ‘findings’. The truth will out.

I have, in the interests of good corporate governance, decided to leave my employ at Eskom from 1 January 2017. I do so voluntarily: indeed, I wish to pay tribute to the unfailing support I have had since I took up office from the chairman, the Board and with those with whom it has been my privilege to work. Together we brought Eskom back from the brink.

It is looks like the captured are jumping off the Gupta sinking ship with haste. One has fallen and more to go. Good riddance Brian Molefe.

I will take time off to reflect before I decide on my next career move.

I wish to reiterate that this act is not an admission of wrongdoing on my part. It is rather what I feel to be the correct thing to do in the interests of the company and good corporate governance.

I wish to thank the shareholder representative, Ms Lynn Brown, the board, the executive team and all Eskom employees for their hard work and guidance in steering the company out of very difficult times during the twenty months that I was privileged to be the Group Chief Executive.

I go now, because it is in the interests of Eskom and the public it serves, that I do so.

First head to roll. Put simply he had no credibility left after the PP report regardless of them being proven or not allegations.

Brian is the fallen angel for investors coming out of Transnet as a hero and now implicated in alleged grand corruption and rent extraction by the PP report. In a way it’s sad, in a way it’s not. He ultimately was successful because he could navigate the patronage realities of the ANC but it has caught up with him.

We need to understand however the rot in Eskom goes much deeper – the whole board needs to be replaced and there are many others there also implicated in the PP report.

I would expect someone similar to be appointed.

I do not see this as a positive. They will appoint someone equally as willing to facilitate rent extraction and ensure nuclear success and as long as the board is in place and other senior management nothing changes. If the CFO is appointed CEO that is not positive and would be a sign of status quo.

The last ‘good’ CEO (Tshediso) was out after just a few months because he was too clean. They won’t make that mistake again. The question is if we get someone obviously ‘dirty’ or someone (like Brian) who on the surface looked fine but was allegedly turning the mechanism of patronage beneath the surface. The level of scrutiny suggests latter is most likely but lets watch see.