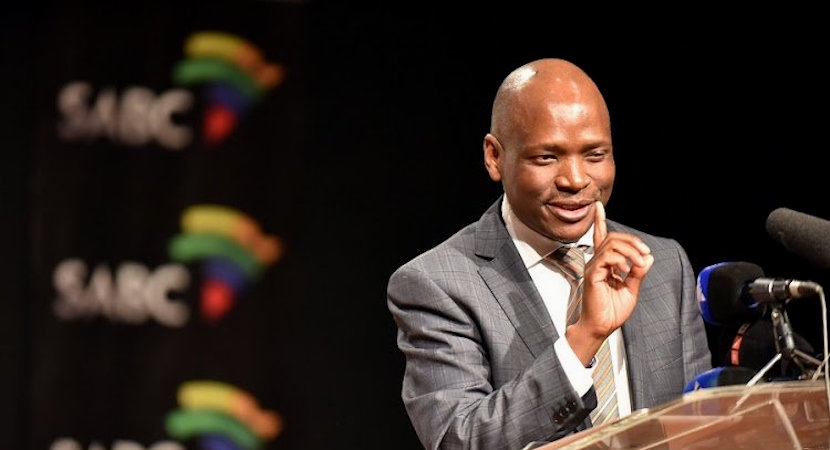 The activist group that has been campaigning against the abuse of taxpayers’ funds, OUTA, has laid criminal charges against SABC propaganda czar Hlaudi Motsoeneng and others at the SABC. OUTA has accused them of fraud and other crimes. Motsoeneng lied about his qualification, among other things. The SABC’s refusal to block Motsoeneng from continuing to work at the public broadcaster amounts to contempt of court, says OUTA. The criminal activities of SABC bosses, meanwhile, to be appear far more sinister than playing games with paperwork and squeezing funds out of the state entity. Death threats have been made to journalists who have got on the wrong side of the Jacob Zuma sycophants. It’s not a moment too soon that someone is starting to turn the screws on the nasty bunch of people who have been ruling the SABC for their own ends. Let’s hope this dossier is handed to detectives and prosecutors who haven’t been ‘bought’ as part of the great state capture game currently being played out across the nation. – Jackie Cameron

The Organisation Against Tax Abuse (OUTA) today opened a criminal case against Hlaudi Motsoeneng, several SABC board members as well as managers at the public broadcaster on charges including fraud, misrepresentation and racketeering.

“OUTA will not stand around watching the branches being trimmed when it comes to corruption and tax abuse. We will no longer allow those guilty of abusing authority just being moved to new positions of power within government structures. OUTA is serious about attacking the root cause of the problem, which is the lack of accountability. The only way to root out corruption and maladministration, is to hold those guilty accountable in their personal capacity,” says Wayne Duvenage, chairman of OUTA.

Allegations against Mr Motsoeneng include fraud and misrepresentation relating to his qualifications, citing that he refused and/or neglected to supply the SABC with his matric certificate when requested. He later admitted to the public protector that he never passed matric.

OUTA has the expressed view that everyone who knew of Mr Motsoeneng’s misrepresentation, shared the common purpose of looking the other way instead of dealing with it, even after it was confirmed. The SABC management continued to ignore Mr Motsoeneng’s misrepresentation, whilst affording him promotions, salary increases and new appointments within the SABC.

The SABC also ignored a second judgement by the Supreme Court of Appeal which found that the public protector’s findings are binding and that those findings must be implemented.

“OUTA submits that the continuous refusal to terminate Mr Motsoeneng’s service amount to contempt of court. We submit that Mr Motsoeneng as well as various board members and group executive members, committed racketeering and corruption. Through the power and authority bestowed upon them, they allowed Mr Motsoeneng to conclude contracts for which he had no authority, prejudicing the SABC and benefiting Mr Motsoeneng,” says Govender.

Section 214 (1) (b) of the Companies Act 71 of 2008 clearly state that “a person is guilty of an offence if the person with a fraudulent purpose, knowingly provided false or misleading information in circumstances in which this Act requires this person to provide information or give notice to another person.”

The second allegation relates to an agreement with Multichoice Ltd. that Mr Motsoeneng concluded without the necessary authority. Further to that, the governance and nominations committee (a subcommittee of the Board) approved a success fee of 2,5% of capital funding raised in favour of the SABC by Mr Motsoeneng. This resulted in the approval of payment of R11.5 million on 12 September.

“The policy change made by the Governance and Nominations committee is highly irregular, and this smacks of personal enrichment to the detriment of the SABC. Quite frankly, the COO’s role is to raise money for the corporation, and he should not be receiving excessive additional remuneration for doing his job,” says Lerissa Govender, internal legal counsel for OUTA.

The third allegation brought in OUTA’s affidavit relates to procurement irregularities in the upgrading and renovations of various studios. Our investigation points to a dubious cancellation of an approved bid adjudication committee decision to procure broadcasting equipment in December 2014 of R40.9 million.

The SCA held even if the PP findings were not binding, the appointment of Hlaudi Motsoeneng was irrational and invalid.

In May 2015 the operations committee, chaired by Mr Motsoeneng, cancelled the prior approved tender procurement process and instituted a procurement decision for the expenditure of R39.4 million to upgrade a multipurpose studio, the acquisition of which deviated from the SABC’s normal procurement processes. OUTA maintains that this decision is highly irregular. “We found a number of anomalies which points to unnecessary expenditure, gross over-payment and potential fraudulent enrichment of external suppliers.”

The charges laid today is the result of an investigation that started in August after receiving information from whistle blowers. OUTA also studied the findings of the public protector’s report dealing with irregularities at the public broadcaster, and focused on what we deem to be the most serious allegations.

“Our investigation revealed serious fraudulent activities with the constant abuse of power by individuals in key positions. However, we have a limited scope of authority in order to determine facts surrounding the fraud, but we were able to determine on reasonable grounds that there was some form of abuse of power which resulted in the SABC bleeding money which it could not afford. We therefore decided to hand the matter over to the police for further investigation,” says Govender.

OUTA will be working with other government entities to ensure that every angle of our allegations are investigated and the necessary action taken against all the individuals implicated, as well as those who knew of the wrongdoing and turned a blind eye to allow the plundering of state funds. “Their actions, combined with that of Mr Motsoeneng, brought the public broadcaster into disrepute and financial distress.”

We have full confidence in the SAPS that they will treat our case with the necessary attention, resolving the matter to the satisfaction and in the best interest of every South African.