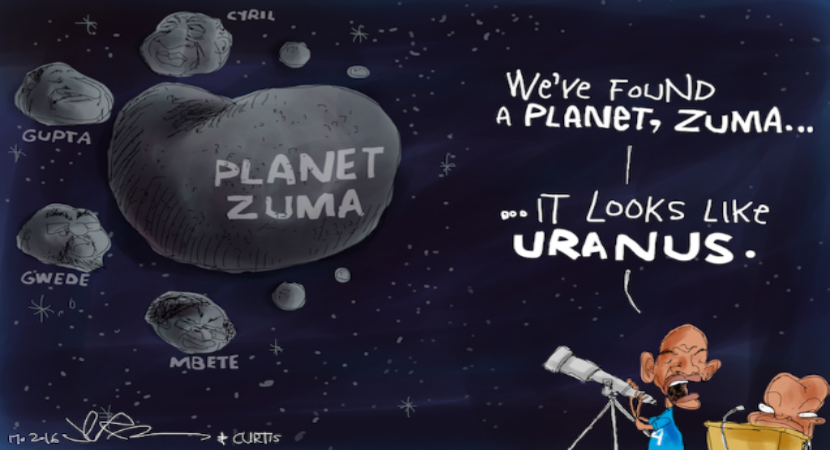 President Jacob Zuma shows no signs of changing tack in 2017, revealing to the ANC Youth League that he regards the so-called #Nenegate crisis as the fault of ‘monopoly capital stooges’. Nenegate is a reference to the short-term switching of finance ministers, with Des van Rooyen replacing Nhlanhla Nene for only a few days. The move sparked rand volatility and there are allegations contained in the Public Protector’s state capture report that Van Rooyen was installed in order to work on the agenda of the immigrant Gupta family – brothers who are linked in business to the Zuma family. Those allegations have been denied. However, since Nenegate, allegations of corruption, financial irregularity and the abuse of state entities by business players have emerged daily. Zuma’s outbursts about #Nenegate indicate that he has no conscience or care about how South Africa is being managed – or he has a mental challenge. Either way, this is not the calibre of person the country needs to lead it to higher economic growth, which in turn would lower levels of poverty, raise employment rates and generally lead to a better life for all, as the ANC has promised its supporters. – Jackie Cameron

Durban – President Jacob Zuma relived Nenegate during a speech at the ANCYL Economic Freedom Lecture at the Olive Convention Centre in Durban on Wednesday, saying the nation wasn’t really aware of what was happening at the time.

“They called it the Nene disaster. But is the nation really aware of what is happening?” he said to a packed crowd of more than 2000 people.

He said in December last year, he took the decision to appoint a new minister.

“The monopoly capital and their stooges attacked me,” he said.

Zuma was referring to the reshuffling of his cabinet last year where he removed then-Finance minister Nhlanhla Nene with the lesser-known Des van Rooyen. Van Rooyen remained in the position for two days amid a growing public backlash. He was then replaced with Pravin Gordhan who had served in the position in previous years. During the two days that Van Rooyen was in the position, the rand fell to an almost-record low.

Speaking about economic transformation, he said those that control the economy, control everything – even the media.

“They can paint you black, even if you are not,” he said.

Those with economic power also had the power to buy people and those people would not refuse, Zuma added.

Zuma said the party was being hit hard, which in turn was “bringing doubt” to the voters. This was why they chose to boycott the municipal elections earlier this year, he said.

He said it was not wrong for the youth to call for economic freedom and challenged them to build the country. Zuma was referring to an earlier speech by ANCYL President Collen Maine.

Zuma also said that there were calls for him to resign, including from an “international chamber”.

“I realised that I will not resign on my own, that would be surrendering to the white monopoly.”

Durban – President Jacob Zuma on Wednesday for the first time gave his side of the story about events surrounding his firing of finance minister Nhlanhla Nene saying “white monopoly capital and their stooges” forced him to reverse his decision to fire Nene.

“December last year I took a decision informed by what I am talking about and appointed a minister of finance, and the monopoly capital and their friends and their stooges attacked me and they are still attacking me today, we were not there… The question is if the president takes another decision, are we ready?” said Zuma.

He was speaking at an ANC Youth League (ANCYL) lecture on economic freedom at the Olive Convention Centre in Durban.

Addressing more than 2 000 members Zuma said: “The fact of the matter is that the economy is in the fewer hands…”

“I can tell you sitting on my own being pushed to reverse the decision, I said to myself, ‘This is what happens when the nation is not alert. When they do not even understand the actions taken and then they listen to the wrong narrative’.

“Since that time some colleagues [call it] ‘the disaster’, ‘the Nene disaster’, some call it, even some amongst yourselves.”

Economy ‘a life and death issue’

Zuma was referring to the reshuffling of his Cabinet last year where he replaced then finance minister Nene with the lesser-known Van Rooyen.

Van Rooyen remained in the position for two days amid growing public backlash.

He was then replaced with Pravin Gordhan who had served in the position before. During the two days that Van Rooyen was in the position, the rand fell to an almost-record low.

He said the economy was an “issue of life and death in any situation” and that “those that have economic power they control everything, the narrative and the media”.

“They can paint you black when you are not black at all because they have the economic capacity to do so.”

He said there were many poor people who were lingering in jail “when they had committed minor crimes or were innocent, but because they did not have economic power they could not afford the best lawyers to defend themselves. But those who have the power, they can commit crime, murder, everything, but they have the best legal brains and they don’t go to prison. So the suffering is felt continuously”.

He said it was of concern that the majority of those who filled prisons were poor.

Zuma told the audience that had the media not been present at the venue he would elaborate on reports that the ANC was losing power.

“They [ANC supporters] did not vote for other parties, they decided to stay at home with their votes because they had no other party to vote for, but the ANC had been dealt with for a long time until people began to doubt.”

He called on the youth to take radical steps “so that we have economic power”.

“And if you do nothing about it, you will end up at times, losing the fight because those who have economic power can buy people with a price that they cannot say no to, so the quicker we liberate ourselves, the better”.

He said the youth was not wrong to say they wanted economic freedom now.

“When we were young we said freedom now, and we got it.”

He urged the youth league to build and take the country forward.

‘Tell me what I have done wrong’

On the issue of land he said the league needed to deal with the matter.

“Part of the weakness of us having a weakness in the economy is because we do not have the land.”

He said land was a critical issue for any country and was one that might have to be reconsidered in the ANC’s policy conference next year.

“Policies are there, we need the methods to implement and liberate ourselves.”

He said he had heard news reports about an international business chamber calling for his resignation.

“And I realised to myself that I will never on my own resign because if I did so, I would be surrendering to monopoly capital,” he said, adding that he asked himself “what had I done wrong?”

“I have asked those who have talked to me, ‘Tell me what I have done wrong’, and when I ask them they run out of answers.”

But the narrative of “corruption and corruption” continues, he said.

Johannesburg – The Congress of the People (Cope) has accused President Jacob Zuma of insulting ANC stalwarts and national executive committee (NEC) members by claiming that white monopoly capital was behind calls for him to step down.

Scores of well-respected stalwarts, as well as NEC members, have previously called for Zuma to step down.

“This is a very serious insult to well-respected stalwarts such as Professor Ben Turok, former minister of intelligence Ronnie Kasrils and Mavuso Msimang. It is also an insult to his own ANC NEC members who had tabled a vote of no confidence in him at the last NEC meeting,” Cope said in a statement.

Some of the party’s stalwarts have also called for him to step down based on a decline in electoral support, allegations that his friends, the Gupta family, had undue influence on the state, and the damning Constitutional Court judgment against him.

The ConCourt found that Zuma had failed to uphold the Constitution by failing to pay for non-security upgrades at his Nkandla home.

Zuma also survived a motion by Tourism Minister Derek Hanekom for him to step down during the party’s NEC meeting last month.

On Wednesday night, Zuma told about 2 000 people attending an ANC Youth League lecture on economic freedom in Durban that he had heard news reports about an international business chamber calling for his resignation.

“And I realised to myself that I will never on my own resign because if I did so, I would be surrendering to monopoly capital,” Zuma said, adding that he asked himself, “What had I done wrong?”

In its statement Cope condemned the comments as irresponsible.

The party said Zuma must tell the country and his own party if all the ANC veterans and ordinary card-carrying members and supporters who called for his resignation are part of “white monopoly capital”.

I don't get why President Jacob Zuma thinks it's white ppl who want him to resign, when the whole country clearly wants him out! phuma ndoda

“It is very clear to us that Zuma just opens his mouth without thinking. He is not only insulting the political fraternity but the broader society. The majority of society is sick and tired of him. Is Zuma saying the religious leaders who called on him to step down are also part of white monopoly capital?”

Cope spokesperson Dennis Bloem said Zuma must accept that his time is up and he must not try and defend the indefensible by blaming white monopoly capital for his “misjudgements”.

Cope also reminded Zuma that former SABC board chairperson Professor Mbulaheni Maguvhe had also refused to step down, but resigned on Monday.

“Where is he now? He is gone. Zuma will go whether he likes it or not,” Bloem said.

We will use next years national policy conference to reflect – Zuma

Durban – President Jacob Zuma said on Wednesday the party would use next years’ national policy conference to reflect on progress.

“In June next year the ANC will hold its national policy conference where we will reflect on the progress made in the last couple of years, including radical economic transformation.

“In the policy conference before Mangaung, we sharpened this particular policy. Today’s session contributes to that process of reflection,” Zuma said.

He was speaking at an ANC Youth League Economic Freedom Lecture at the Olive Convention Centre in Durban.

“Each ANC conference takes stock of progress made and what else needed to be done to achieve this particular goal or other goals….”

Zuma said the ANC Youth League was reminding the government that there were policies that were recorded.

“The issue was what happened with the implementation of the correct policies?”

He said the fact “that the minority white were in control was not a surprise”.

“As the youth, for you to ask what has since happened is correct. If nothing has happened … what then do we need to do to implement these policies?”

Zuma told the more than 2000 people that some could say the ANC had done a lot in the last 22 years to transform society and some would differ.

“We reiterate that the political freedom gained in 1994 is not complete without the attainment of economic freedom,” Zuma said.