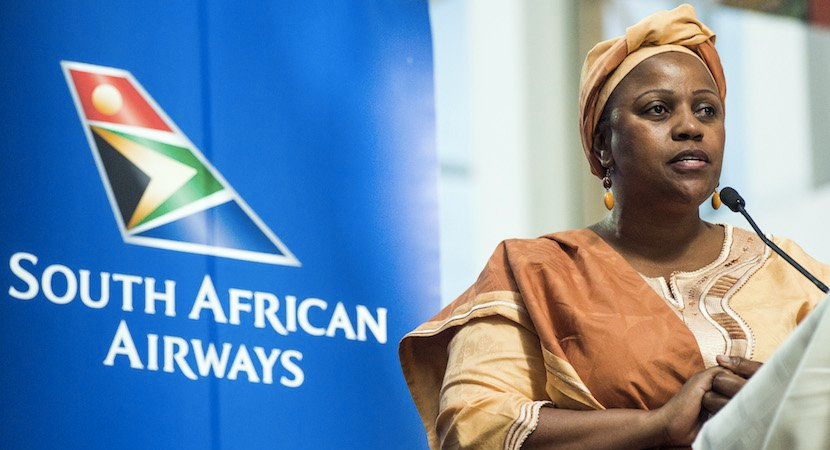 There is no denying that Dudu Myeni must be one of the most incompetent captains ever to run a South African state-owned enterprise. The Organisation Undoing Tax Abuse (Outa) and the SAA Pilots Association noted that losses on her watch have ratcheted up to R10bn in a recent application for a court order to declare Myeni a delinquent director who has grossly abused her position. In Parliament this week it emerged that the losses might be even higher than this, with the budgeted loss forecast for 2016/17 double the initial estimate. The figure has risen from a huge R1.7bn to a staggering R3.5bn. It beggars belief that Myeni remains ensconced in her position. With a track record like hers, the inescapable conclusion can only be that she is a politically protected individual. Of course, it’s no secret that she has a close – and even special – relationship with President Jacob Zuma. But surely even he must be embarrassed that she is presiding over the collapse of an airline that was once the pride of its citizens? The SAA saga is a reminder that in Zuma’s hands South Africa’s economic future looks dismal. This debacle is also a reminder that corruption is eating away Nelson Mandela’s legacy. – Jackie Cameron

Cape Town – South African Airways (SAA) has revised its budgeted loss forecast for 2016/17 to R3.5bn from an earlier estimate of R1.7bn, documents sent to Parliamentarians on Friday reveal.

In a question sent to the SAA board from the standing committee on finance, which has oversight of the state-owned airline, the committee assumed that SAA had reduced its operating losses for the year under review.

It asked: “How sustainable is this reduction should the external economic environment become unfavourable?”

The SAA board responded, clarifying that “the company has not reduced its losses for the year under review”.

“The company will be focused on growing its revenues and to continue to apply cost compression initiatives,” it added. “It operates in a very competitive industry and the company is aware of the risks from external factors to its business and the airline industry.”

In September, the government granted SAA an additional going-concern guarantee of R4.7bn, increasing its total guarantees to R19.1bn.

Democratic Alliance MP Alf Lees told Fin24 on Friday that the added loss “will represent a real cash loss as it will not contain the R1.9bn Airbus deal impairments that contributed to the R4.9bn loss in the 2014/15 year”.

“It is a massive increase of a R2bn increased loss when compared with the R1.5bn loss declared in the 2015/16 year.

“The question here is whether this loss was massaged down to make the old SAA board – and Ms Dudu Myeni, the chair, in particular – look like they were making good progress?

“The new board of SAA has clearly not been able to turn SAA around or even just stem the massive losses. The board is hamstrung by the poor and incompetent leadership of its chair Dudu Myeni.

‘SAA will be back with the begging bowl’

“There is no doubt that these massive losses will undoubtedly mean that SAA will once again run out of cash. SAA will be back with the begging bowl to get another government guarantee handout.”

He called on Finance Minister Pravin Gordhan not to provide any further financial assistance to SAA.

“SAA can only be saved if immediately put under business rescue and action taken to achieve a private equity deal that would result in capital revenue for the shareholder and thus the taxpayer,” he said.

“The DA has asked that SAA produce a cash flow analysis for the 12 months of the current 2017/18 financial year. This will enable the full extent of the bankruptcy of SAA to be seen.

“The DA is even more convinced that the only way to stop the non-stop losses is to put the airline into business rescue, and we will therefore make every effort to ensure the minister of finance takes immediate action to achieve this.”

Hahaha Dudu Myeni is now complaining about anti-transformation by pilots and attacking white media. I wonder if SAfm is part of that.

In its Budget Review, Treasury said SAA “pared its losses from R5.6bn in 2014/15 to R1.5bn in 2015/16. The improvement resulted mainly from lower fuel prices and lower asset impairments”.

Those pared-down losses would now seem to have been a lot less with the revised R3.5bn amount.

“Government continues to help SAA secure funding with its existing lenders,” it said. “A new board, appointed in September 2016, finalised the 2014/15 and 2015/16 annual financial statements as required by law.

“The board is finalising the recruitment process for a chief executive officer and a chief financial officer. The process will be submitted for government’s consideration and approval.

Constraints expected to persist over the medium term

“SAA’s liquidity constraints are expected to persist over the medium term. Government will work closely with the board to reduce associated risks. During 2017/18, government will provide some financial support to SAA in a manner that does not increase the budget deficit.

“The support will strengthen the new board’s ability to effect a comprehensive turnaround strategy that allows SAA to function on a financially sustainable basis.”

Treasury said advisers are assisting government with a review of SAA’s assets. “The review is expected to be complete by the end of March 2017. The goal is to develop a stronger, more efficient and sustainable state aviation sector,” it said.

“The possibility of merging SAA with South African Express, and introducing a strategic equity partner, will be considered.”

In its appendix in the review, Treasury said that “with support from the National Treasury, SAA has secured funding to allow the board time to review and strengthen its turnaround plan, and take steps to stabilise the airline and return it to financial sustainability”.

“The board is finalising the recruitment process for the chief executive officer and the chief financial officer positions so that recommendations can be submitted to the shareholder for consideration.

“The minister of finance has stressed to the SAA board that urgent action is required for the airline to operate sustainably.

“This includes the board reviewing and strengthening the airline’s strategy to accelerate the turnaround and to ensure its robustness in the context of increasing competition and volatility in the fuel price and exchange rates.

“During this ‘business unusual’ period, SAA will remain under intense government oversight through weekly, monthly and quarterly meetings.”